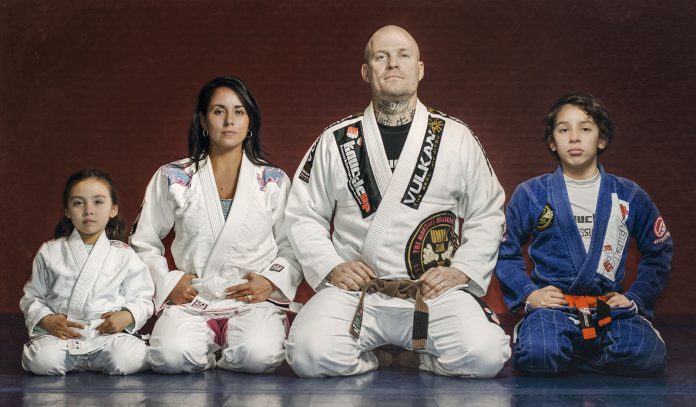 Brazilian Jiu-Jitsu starts off as a family affair. To this day, the Gracie family is arguably the most famous martial arts family in the history of martial arts. Well, at least the history of the western world. That said, BJJ continues to be a family thing, with lots of the big names of the sport being involved in the Gentle art along with a sibling, or two (or five). The Gracie family is still going strong, of course, but other siblings have also become household names in Jiu-Jitsu over the years. Moreover, there are upcoming BJJ brothers and sisters that are bound to re-shape the landscape fo grappling in the years to come.

If you could train Brazilian Jiu-Jitsu with your sibling, would you? It can be a blessing or a curse, similar to training with a spouse or partner. It will either work out to perfection or not at all. That said, there are great examples of BJJ brothers and sisters that have managed to push one another to achieve great heights in the sport. What I really love is that there are even more of these “BJJ families” emerging, and now even parents seem to be joining in. I have no idea what we’re in for in the future, but I guess Brazilian Jiu-Jitsu is definitely fun for the whole family!

When BJJ Is A Family Thing

Although Brazilian Jiu-Jitsu started off as a family thing, not many people saw it as something they’d do as a family activity in the beginning. When BJJ came into the spotlight it was all about challenges, Vale Tudo style matches, and proving that it could beat all other martial arts. A lot of trash talking and subsequent incidents followed most of these matches and challenges, not painting a picture of a family sport for the wide masses.

Fast forward half a century or so, and Brazilian Jiu-Jitsu is a sport that has spread worldwide. Moreover, all categories of people are training, including male, female, kids, professional athletes, hobbyists, etc, etc.  This switch from something intended to be promoted as self-defense into a full-blown sport of a world scale made BJJ a lot more appealing to the wide masses. As such, families have started getting involved in the sport, given the unique opportunities it offers for people of different ages to be able to train in the same sport.

Among all the families, and siblings that all train together, there have been those that have really influenced the evolution and spread of Jiu-Jitsu on a global scale. Some of the most famous BJJ brothers and BJJ sisters have been in it from the early days, helping establish BJJ as the sport/art it is today. Others have joined in just recently, but are already household names when it comes to grappling. In fact, some of these grappling siblings are not even adults yet, let alone black belts, and have already beaten world champion black belts.

The most interesting aspect of looking into the most famous BJJ brothers and sisters is that they represent several different generations. They have all emerged during different times of the sport’s evolution, and they all play pivotal roles in what BJJ has achieved, and all of its future accomplishments. Just as an example, you have the Riberio brothers who helped pioneer jiu-jitsu in the western world on one side, and the Ryan brothers on the other, breaking all sorts of grappling records and showing that you don’t need to be a black belt to be able to beat one (or ten). 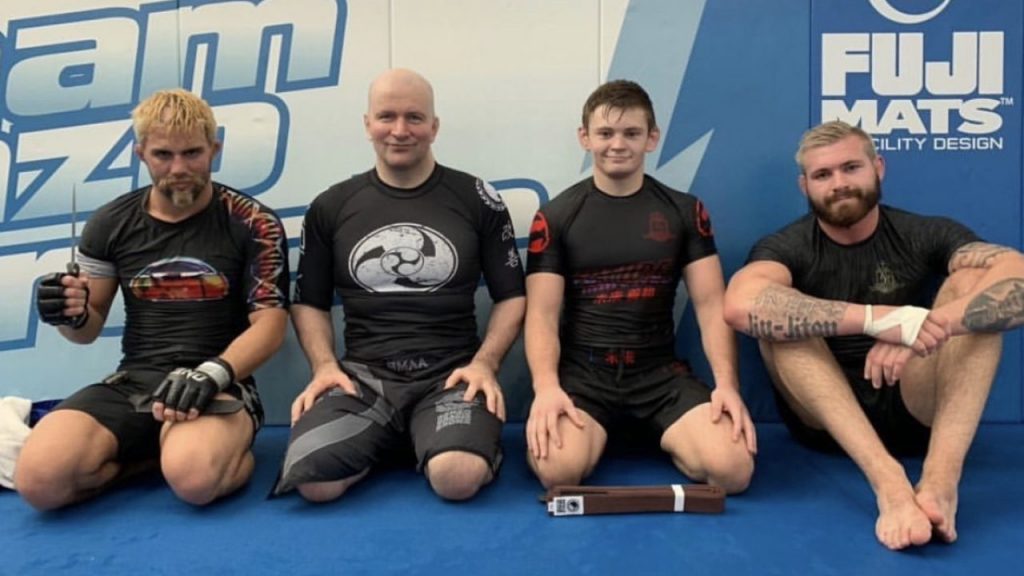 Without any specific order of things, I’m just going to start looking into the BJJ brothers and sisters that are more or less, celebrities in the BJJ world. I’ll start with the Ryan brothers, just because Gordon is on top of the world right now, and Nicky is rising even faster than his brother. Gordon Ryan came to prominence through the Danaher Death Squad, and has become the best grappler in the world in the past couple of years. His brother Nicky, who is 18 years old and still not a black belt. And still, Nicky already has a couple of ADCCs behind him and some major super fight victories. Will he be able to beat his brother’s accomplishments by the time he gets to his age? 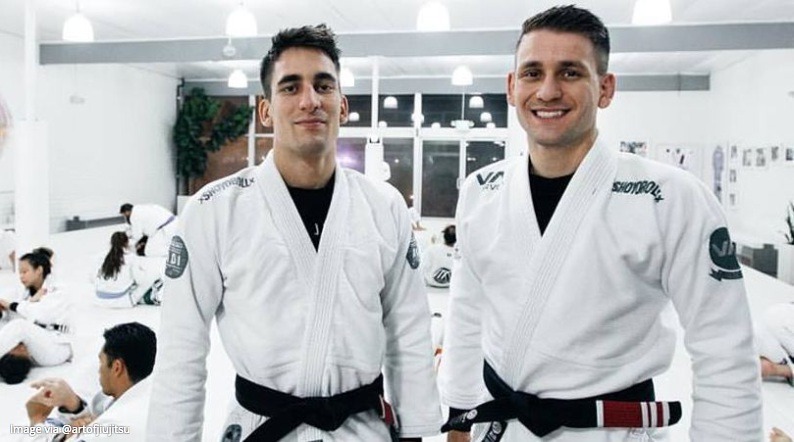 The Mendes Brothers, Guillerme, and Rafael are arguably the sport’s most famous BJJ brothers couple. Both are world champion competitors that have changed BJJ, especially with the Gi forever.  Between 2010 and 2020 the brothers re-shaped the way we perceive the BJJ guard, introducing stuff like the Berimbolo and inversions and taking the entire sport to a whole new level. They’re not just competitors, though, with their AOJ academy begin one of the largest in the world, and, as expected, a real den of high-level competitors of all belt levels. They used to compete for the Atos banner, with Galvao as the head of the organization, but just recently decided to split and focus on their Art Of Jiu-Jitsu brand. Both Rafa and Gui are still active, competing, teaching, and recording DVDs, so there’ n doubt they still have lots to contribute to Jiu-Jitsu, despite already having legendary status. 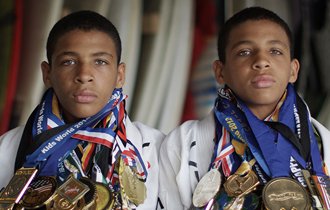 A couple of “young guns”, the Ruotolo brothers are twins that train under the Atos banner. Tye and Kadestarted off in AOJ, but are now part of Galvao’s team, heading in pretty much the opposite direction of the Mendes bros, at least in terms of team association. Tye already competed at the ADCC, aged just (the youngest ever to step on the ADCCmats), and barely missed out on a bronze medal when he almost broke Paulo Miyao’s leg in the 3rd place match, and subsequently lost because of the experience of Miyao. The twins have been training for almost 15 years now, since they were kids, and are “only” purple belts at the moment. That hasn’t stopped them from beating World Champion black belts, though, or recording DVDs and already hosting their own seminars. 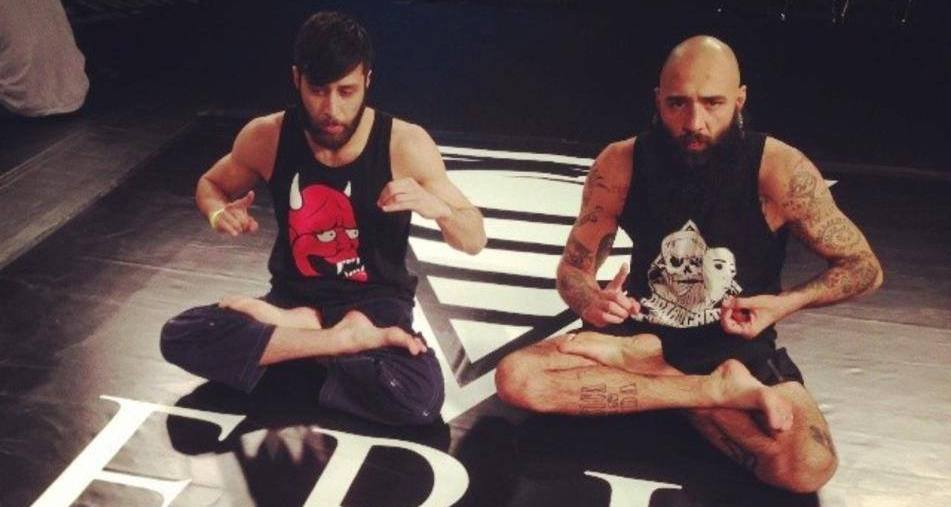 The Martinez brothers area probably the strangest sibling couple of the bunch. They are former competitive breakdances that are a part of the unorthodox 10th Planet team. They kicked off with amazing accomplishments, Geo being among the fastest black belt promotions in the history of the sport. Both black belts under Eddie Bravo, the “Freakozoid” and “Boogeyman“ have competed at any given opportunity and against anyone. They are exclusively NO-Gi artist, of course, with Geo having several ADCCs behind him, but no ADCC silverware to his name…yet. The level of technical improvement these BJJ brothers have brought to Jiu-Jitsu is also outstanding, especially in the realm of D’arce chokes (Boogey) and the truck position (Geo). They head the 10th Planet San Diego and 10th Planet Freaks gyms. 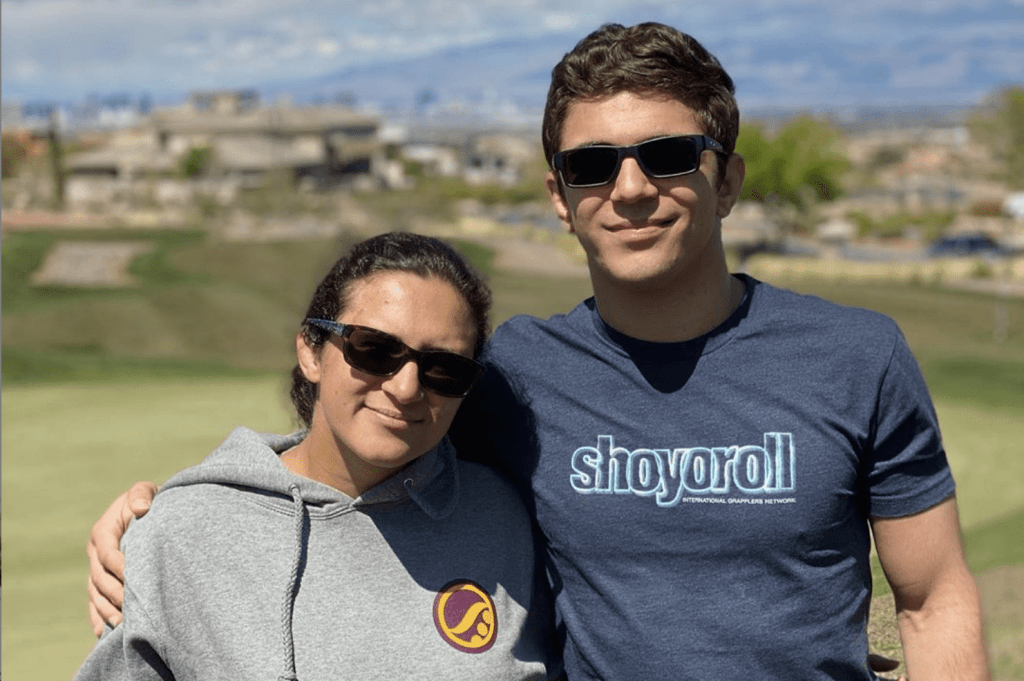 Tammi and Mikey Musumeci are a brother and sister combo that have been arguably the best representation of marital artists so far. Both humble, quiet, and extremely deadly on the mats, Tammi and Mikey are multiple times World Champions and an unmistakable part of the history of Brazilian Jiu-Jitsu. They also both started with Atos/AOJ, but later left for Caio Terra’s Association. In terms of achievement that have embedded them into the BJJ world, Tammi has 4 world championships (3 in No-Gi), and that crazy and unforgettable performance against Michelle Nicolini. Nicolini broke Tammi’s arm in the finals of the 2014 Worlds and Tami never tapped and kept fighting, to the end, even though she lost on points.

Mikey, on the other hand, is also a 4 x World Champion, but three of his titles are in the Gi. He is one of the most technical and innovative guard players of today, in a direct rivalry with the Mendes and Miyao bros. 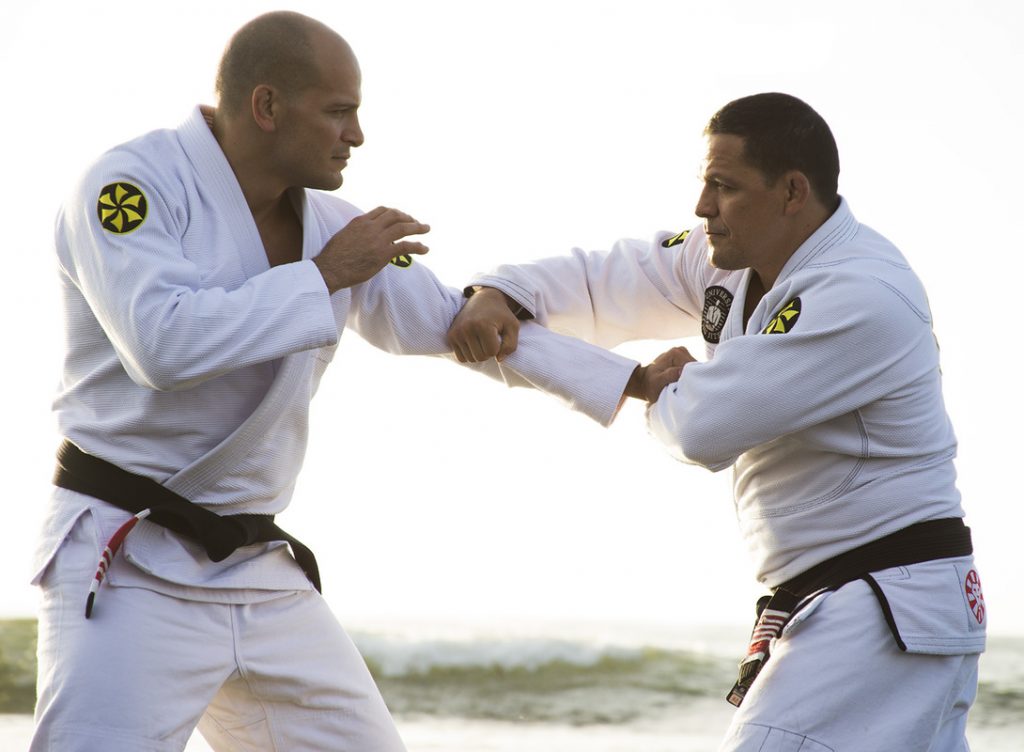 A World Champion since 1996, with 5 world and 2 ADCC title to his name, older brother SauloRIbeiro is known for having won those titles at light, middle, heavy, medium-heavy and super heavyweight, something nobody else has achieved ever. Six years younger Xhande is probably even more dangerous than his brother, with 7 Gi World titles to his name, and a couple of No-Gi ones along with two ADCC titles. The Ribeiro Jiu-Jitsu Association is one of the largest and best academies in the world, and the brothers are known for their University of Jiu-Jitsu instructionals which have really changed the way people perceive BJJ. Still going strong, Xhande is an active competitor to this day, while both are shooting DVDs and holding seminars around the world. Oh, and one more thing. Xhande has only had his guard passed 4 times in competition in his entire career. 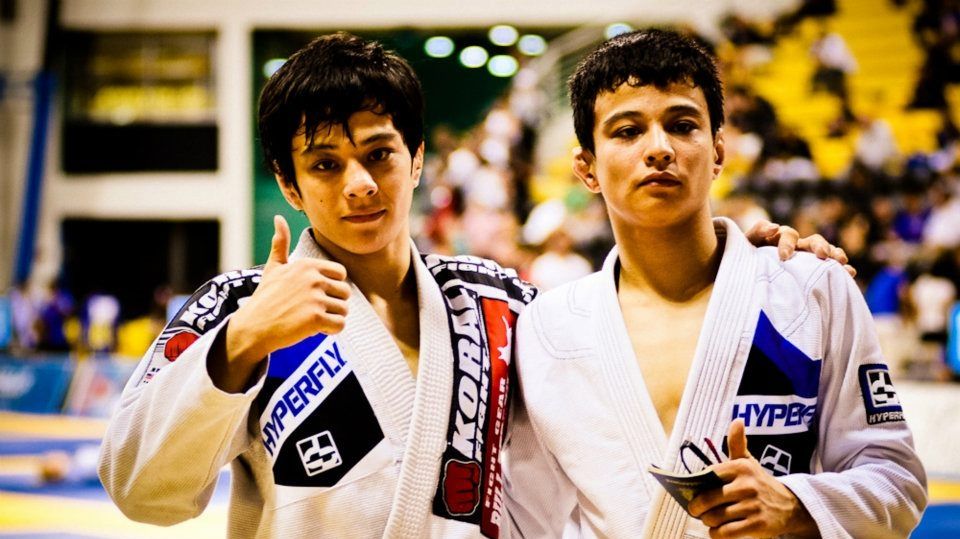 The Miyao brothers are another ultra-famous BJJ brothers couple. Paulo and Joao Miyao came into focus with their incredible dedication to the sport. Apart from their huge competitive success (they have a total of 8 World titles between them, GI and No-Gi) they were known for living in the gym for years, eating and sleeping on the mats, and spending every waking moment training.  Apart from running rampant in their own divisions (feather and light feather) they also made a name for themselves by winning the absolute division. Both represent the  PSLPB Cicero Costha academy but are also associated with the famous Unity JJ in New York. 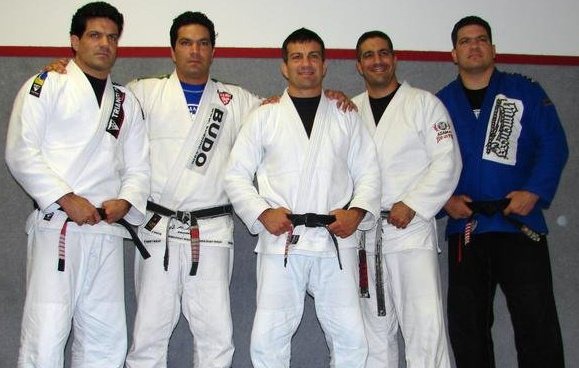 The Machados are another family that’s right up there along the Gracies. I say family because they’re not just a couple of BJJ brothers, but rather a true clan of BJJ experts. Rigan, Jean-Jacques, Carlos, Roger, and John Machado are all high-level black belts, world champions, and cousins to the Gracies. All of the Machado brothers have their black belts from Carlos Gracie Jr. They run a highly successful association, with most of the world’s celebrities choosing to train at their Holywood establishment, which was open thanks to Chuck Norris’ fascination with Jiu-Jitsu.

The modern faces of Gracie Barra, Victor, and Braulio are pioneers of Jiu-Jitsu and the GB in Europe. Based out of the UK, the brothers are extremely active, although lately more in GB affairs rather than competitions. However, they don’t just have world championships (Victor is a No-Gi World champion, and Braulio a 3xGI World Champ and ADCC double gold winner). Both have brought a lot of innovation to the sport, like the inverted triangle (Victor’s bread and butter) and the nasty Estima Lock (Braulio’s invention).

The Behring brothers are pair of people that were true representatives of Gracie Jiu-Jitsu. Sylvio and Marcelo were the sons of Flavio Behring, one of the best students of the Gracies in Brazil. Marcelo himself stood out as Rickson’s top student, until his early death. Both brothers had huge challenge matches back in those days that helped put Gracie Jiu-Jitsu on the map. Sylvio is now an 8th-degree coral belt and the head coach at the X Gym in Rio de Janeiro, where he works with most of the Black House MMA fighters.

Whoever the next combination or clan of BJJ brothers and sisters might be, I am really looking forward to seeing what they’ll bring to the sport. There are several very promising young siblings that are racking up wins in the kids’ divisions and it is only a matter of when they’ll step into the limelight. Until then, though, almost everyone on the list above is still active, so we can definitely expect big things from the already well-established siblings of BJJ, especially the younger ones like Nicky Ryan and the Ruotolos.