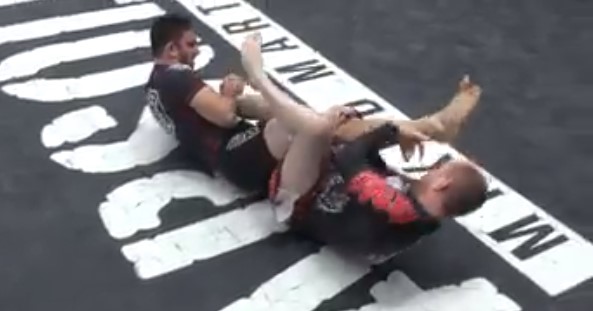 This should be a reminder for everyone to TAP ON TIME.

There’s nothing more important than your Health. Unfortunately for this guy he had to learn it the hard way.

In round 7 of the recent MA1 Challenge Qualifier, Ashley Wright sustained a break of the fibula and tibia while fighting off a heel hook.Even though Ashley had trained with heel hooks before, and is an amazingly competent practitioner of Brazilian Jiu-Jitsu, this was a freak accident and a reminder that these things can happen in combat sports. If anything, Ashley's accident reminds us all the importance of tapping early in submissions, even when competing!With Ashley's permission, we've uploaded the footage of his accident. We have also set up a GoFundMe to help facilitate his recovery, and get him back on the mats as soon as possible! It's important to rally around our training partners in times like this and we know how amazing the BJJ community is.All the best in your recovery Ashley, we are with you 100% of the way and look forward to seeing you back on the mats. Donation link: https://www.gofundme.com/ashley-wright-recovery-supportA message from Ashley describing the moment of the submission -"Obviously somewhere along the line "I fucked up". I went into this match with the intent of walking out. This was not a case of me not wanting to tap and trying to tough it out. I've got a job to go to and I wanted to keep training the next day. I tried to counter attack my opponent and when I let go of my opponents leg I had decided to tap. I didn't get there. As many high level jiu jitsu practitioners have told me this was a freak accident. I suffered a butterfly fracture to my Tibia. This type of fracture is caused by bending and not rotation as is commonly seen in heel hooks. If my Tibia broke due to rotation you would see a spiral in the fracture instead.What I felt prior to my shin snapping was not the typical pressure that indicates a heel hook is on. My shin was feeling tight and as I let go of his heel I had decided to tap because I couldn't escape.I can only say that I have been amazed at the support everyone in the jiu jitsu community has provided and it has made a considerably tough time that little bit easier." – Ashley Wright

WARNING: The Worst Leg Break in Jiu Jitsu Ever