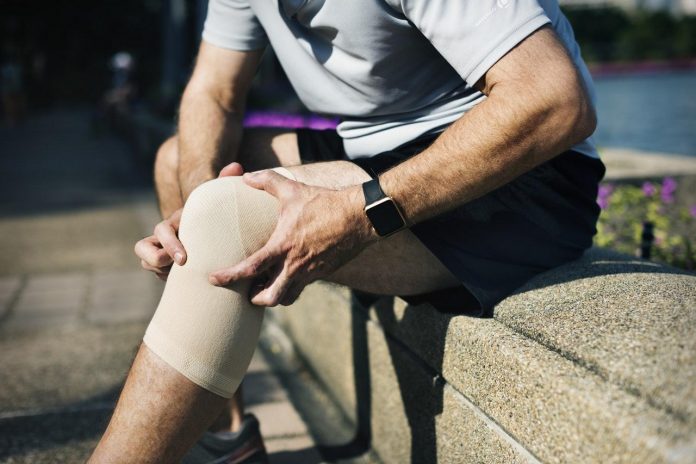 BJJ injuries are a part of the sport, and most grapplers come to terms that they’ll never wake up pain-free again. In most cases, injures tend to be stuff that is either not serious at all, or will pass given time. Usually, BJJ injuries come down to stuff that is more uncomfortable and just painful rather than injuries that require surgery or other dedicated medical help. That said, nobody likes injuries. In all the ways you can get an injury doing Jiu-Jitsu (and there are many), getting one doing dumb stuff is the worst. Check out six examples of the dumbest wats in which you can injure yourself on the mats.

One of the most anticipated fights in UFC history (and one that never materialized) was the match between Khabib Nurmagomedov and Tony Ferguson. The fight got canceled five times (I think), and one of those was down to an injury Tony sustained. The injury was a severe one – ligament tear in the knee. How did Tony get it, though? He tripped on some cables while on UFC media duty. Talk about a dumb and unexpected way to get an injury! Well, there’s a lot of that in terms of BJJ injuries, especially when people goo around on the mats. 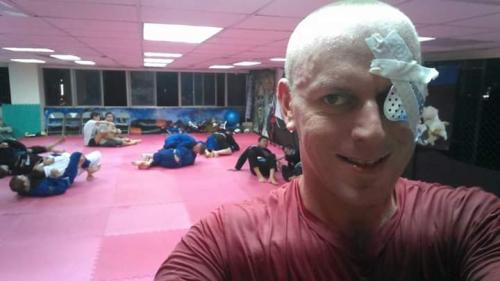 To be honest, there’s no uncommon injury for people that train BJJ. I’ve seen or heard just about everything in terms of BJJ injuries, from stubbed toes to broken necks. I guess in a sport as crazy as Jiu-Jitsu you could expect everything to be common. That said, nobody likes injuries, even though there’s a lesson to learn from training with one (or three).

I have to insert a disclaimer here: do not train while you are injured. I know absolutely nobody apart from those having to undergo surgery will listen to it (including me) but still, I have to state the obvious. Now that we have that out of the way, we can talk about how to actually train with common BJJ injuries.

While training with BJJ injuries is possible, rolling with them should be avoided. Since most of you are not going to heed that advice as well, let me share a few pointers. When you have an injury, you have an opportunity to widen your game. Try different things out, preferably those that le you use your body without aggravating your injury. It is a great way to learn new stuff and still be able to train while allowing your injury to heal up.

That said, I have to also note that training with an injury and not adjusting your game should perhaps be considered as another very stupid way to get injured. It not only risks further damage to the injury you have. It also risks developing a new one which is bound to appear as a result of your body compensating for you not using a certain part of it.

6 Dumbest Ways Of Getting Injured In Jiu-Jitsu

Of course, if there were only 6 dumb ways of getting injured in Brazilian Jiu-Jitsu, not so many of us would end up nursing bumps and bruises (to put it gently). There are plenty of other ways, some dumb, some not, but the ones I’m about to list below just keep on being reasons for stupid BJJ injuries over and over again! If I never see another injury because of one of these, I would be a very happy grappler indeed! Somehow, though, I doubt that will happen.

Too Stubborn To Tap 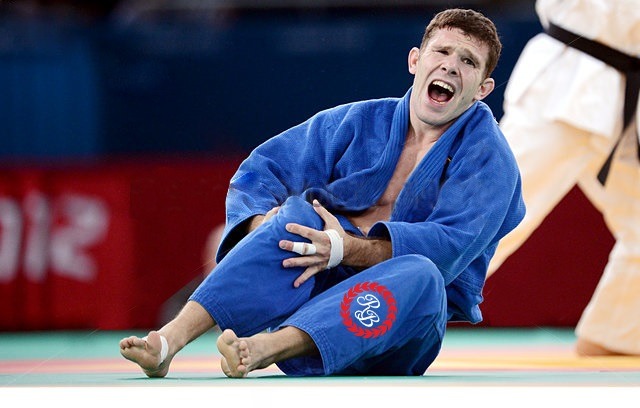 How many times have you tapped too late to a submission? Yeah, I know, you don’t like to tap out. You’ll learn to love it soon enough, but it would be great if you don’t get an injury while you’re working on taming your ego.

After a while, you’ll figure out that tapping out is a must. However, you’ll need to learn the fine line between being too stubborn to tap and looking to get better at late escapes. Sacrificing a leg/neck/arm just because you don’t want to tap is neither a good way to defend nor a smart thing to do. In fact, it is one of the dumbest ways that guarantee you get an injury unless your training partner has the composure to let go.

Oh, and another thing – not tapping in a tournament won’t make you a tough guy/girl, but rather a very injured one. Admit the defeat and tap instead of having to sulk about getting an injury in one of the dumbest ways imaginable.

For all of you out there that love to do flying stuff – don’t. Apart from there is absolutely no reason to send your body flying in the air when doing Jiu-Jitsu, there’s such a high risk to reward ration with flying attacks that they’\re simply not worth even considering. Yeah, if they work, it’ll look very cool, but can you really perform the move on everyone with a high degree of success? In most cases, it is either you or the training partner that will let injured. I’ve seen people end up with the most idiotic of BJJ injuries while attempting a flying something.

On that note, also consider that inverting like a fidget spinner is one of the dumbest ways of overusing your neck and developing chronic injuries that might even rule you out of the sport for good. Just sayin’.

There is a good reason why every athletic activity starts with a warm-up – we need it! Moreover, BJJ is such a crazy athletic activity, that it requires a thorough and specific warm-up. And yet, most people skip warm-ups like their Covid-19 positive lamas that are spitting everywhere.

Well, try and go to the open mat and just roll and see what happens. OR even dumber, go to a tournament and jump straight in. There’s not a tendon in your body that won’t come close to snapping, and I’m not even going to talk about ligaments and your spine. If there was ever a dumb way to earn BJJ injuries it is trying to fight with people without getting your body ready for it.

“Anything that can go wrong, will go wrong”. This law is just perfect for Brazilian Jiu-JItsu. While there’s no way to predict if someone is going to fall not you. Or come crashing into you when you roll, you can definitely factor for it. I’ve seen folks come to train at 100 square meters facility, and with just two pairs rolling, they still end up crashing into each other. With gyms usually packed for rolling, there’s just no way past this in the sport.

There is, however, a way to mitigate things. Be aware of what is going on around you. If you’re about to roll with a 110 lbs. white belt girl, and next to you are 200+ lbs. purple belt competitors, move to the other side of the gym. It is common sense, but one not often employed by grapples. Conversely, it leads to some of the dumbest injuries when someone else’s body comes crashing or flying on top of you out of nowhere. Joking aside, this is the way in which people get the most gruesome injuries, so really do try and develop spatial awareness on the mats.

I’ve seen some horrible finger injuries happen when people get their fingers stuck in shorts, T-shirts, or even the Gi! While this one is right out there in Murphy’s law territory, it is still something you should factor in when grappling. If your partner has baggy clothes, warn them about it. Roll, but be wary of how and where you place your grips. Moreover, every time there is a Gi involved, grip with clear intentions rather than just holding on to a part of the cloth. You can easily break fingers or toes tangling them up with the Gi, and I’ve even seen ankle injuries because of it. 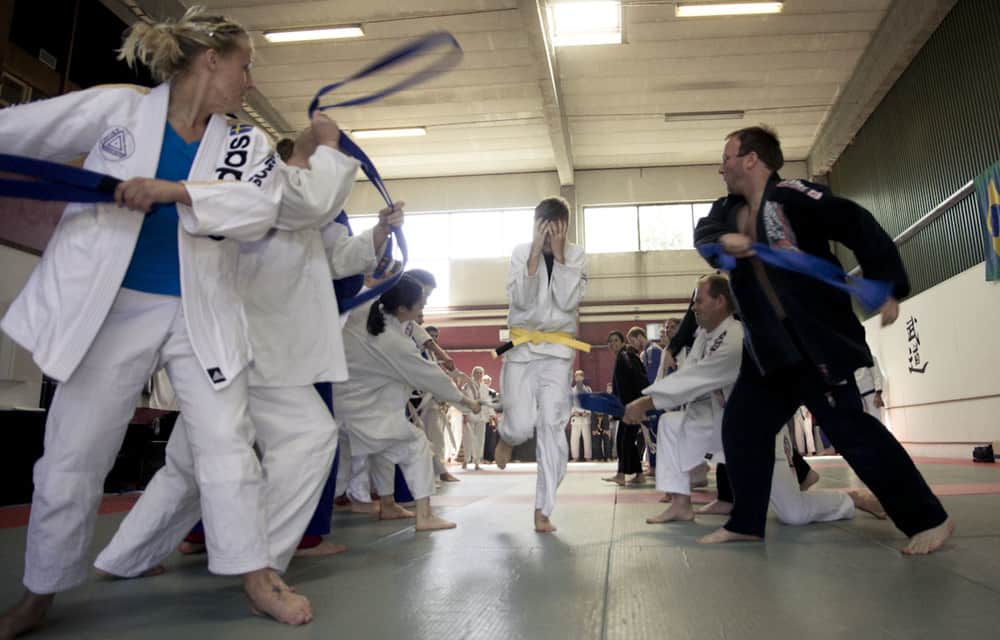 It has to be one of the dumbest ways that I’ve seen someone get injured in a way that it sidelined them for years! The belt promotion gauntlet is not a good idea anyway. In terms of injuries, it really does cause some of the dumbest BJJ injuries ever.

In one example, I was a person trying to run in order to avoid a few of the more vigorous hitters, only to end up slipping at the end, flying off the mats, and breaking his wrist. It took surgery and a couple of years for him to get back on the mats. Those belt whips also have the potential to cause injuries, especially if someone strikes the neck or head. If you’re looking for one of the dumbest ways to get an injury, not just in BJJ, but in general, the gauntlet has to be it.

Getting BJJ injuries is unavoidable. Doing dumb things that get you BJJ injuries, on the other hand, is completely avoidable. This doesn’t mean living in fear of injuries and never attempting a flying armbar, or trying to escape a leg lock very very late. It does mean that you should use common sense and stay safe first, and to everything else second. Why? Because if you have to stay at home or in a hospital with a serious injury, you can’t train. that’s why.

BJJ Attitude: Be a Martial Artist On And Off The Mats