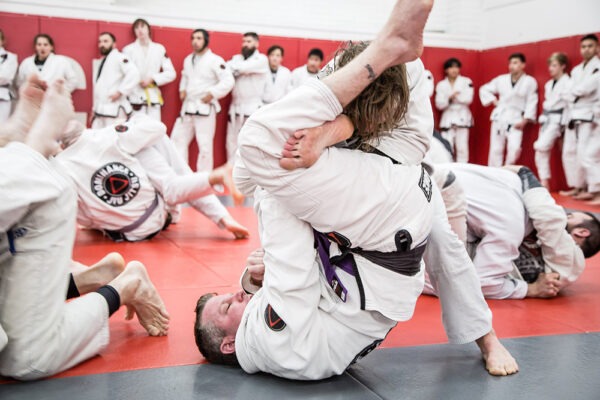 What is the number one thing that annoys you on the mats? I’ll help, it has to do with open mats and rolling. Let me help you even more – it has to do with lots of people rolling on the mats at the same time. Yeah, you got it – the rolling collisions. If there’s one thing that annoys people when they’re rolling are a couple of other grapplers, especially if they’re of the heavier variety, slamming into them like a freight train. Speaking from experience, this is not fun. However, it goes beyond just fun or annoying, because lapses in attention like this can cause serious injuries to people. How to be safe in BJJ, then? Work on developing mat awareness.

Often times rolling is so encompassing and requires so much of our attention that we completely ignore everything happening outside the grappling exchange we’re into at the moment. I get that. However, others do exist on the mats as well, and the thing is, they’re also deep into grappling exchanges of their own. That does seem like a recipe for disaster. All it takes for one pair of grapplers on an open mat to “lose themselves” and they could potentially injure plenty of the others on the mats. While we might think mat awareness is just common sense, once you’re deep in a roll you’re not really having much to do with common sense. However, thinking about how to be safe in BJJ, for yourself and others, has to be in the back of our minds every time we roll.

You’re Not Alone On the Mat

Open mats are the classes most people look forward to. Actually, they’re the classes everyone looks forward to. However, they also happen to be the most chaotic, injury-ridden training sessions, especially when you’re training among competitors. It is one thing to have injuries that just come with the territory of training a contact combat sport. It is a completely different thing to get injured by people that act as if they’re the only ones on the mats while you’re minding your own roll. 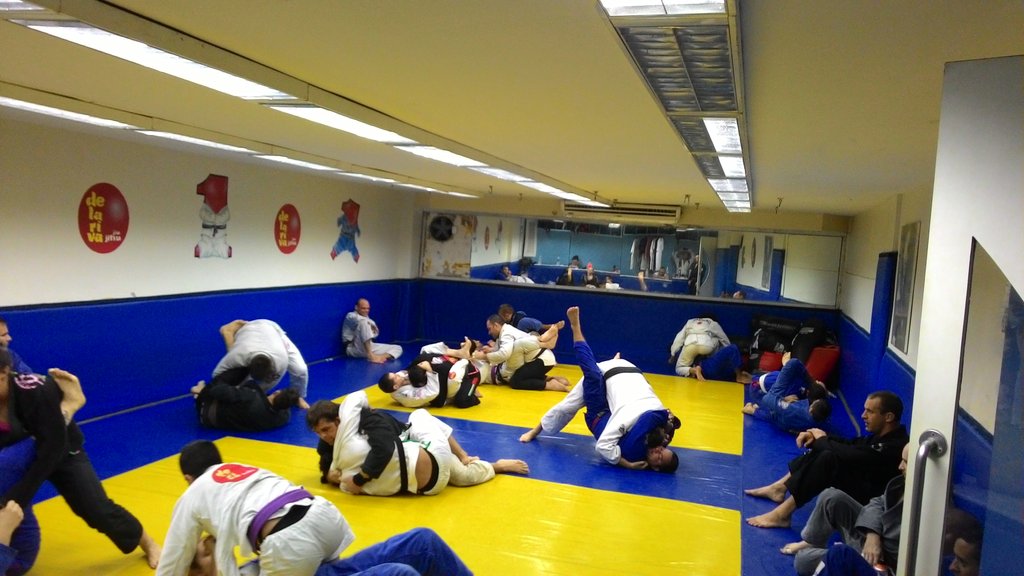 I already said that people sometimes get so deep in a roll, they forget about everything going on around them. Moreover, when that roll is not a “chess match” but rather one of those scrambly affairs that reminds of two cats fighting each other, the dangers of injuring someone in the vicinity is really high. Now imagine if another pair of people acting in the same way. Or, even worse, if everyone just rolled like there’s nobody else and no tomorrow. Suddenly open mat sessions don’t seem like such an attractive thing any longer, do they?

Having mat awareness and common sense when rolling is really the staple of how to be safe in BJJ. A lot of the injuries some highest-level athletes have sustained have been when others bumped/crashed/fell onto them. Both GSP and Dominic Cruz suffered knee ligament tears in that manner during wrestling training. It is not hard to see how really bad injuries can occur when mat awareness is not high on our list of priorities. Unless you’re in a competition, where there’s nobody else on the mats, you have to consider that you’re not alone. Even in competition, innocent photographers by the mats can still end up suffering, as we saw at the 2019 ADCC.

How To Be Safe In BJJ: Ground Rules

No amount of prefab, rehab, stretching and supportive gear will keep you safe on the mats if you and your teammates are not aware of your surroundings. That doesn’t mean stopping every roll all over and over again to check on people near you. It means knowing who the couples rolling next to you are, whether or not you’re a danger to them, or they are to you. Moreover, who you’re rolling with is also important as some couples tend to be explosive rolling combinations however you put them. It wouldn’t be fun, though, to end up injuring a couple of beginners, or worse, one of the top competitors in the gym, just because you wanted to submit a blue belt with the latest crazy move you saw on YouTube at any cost. 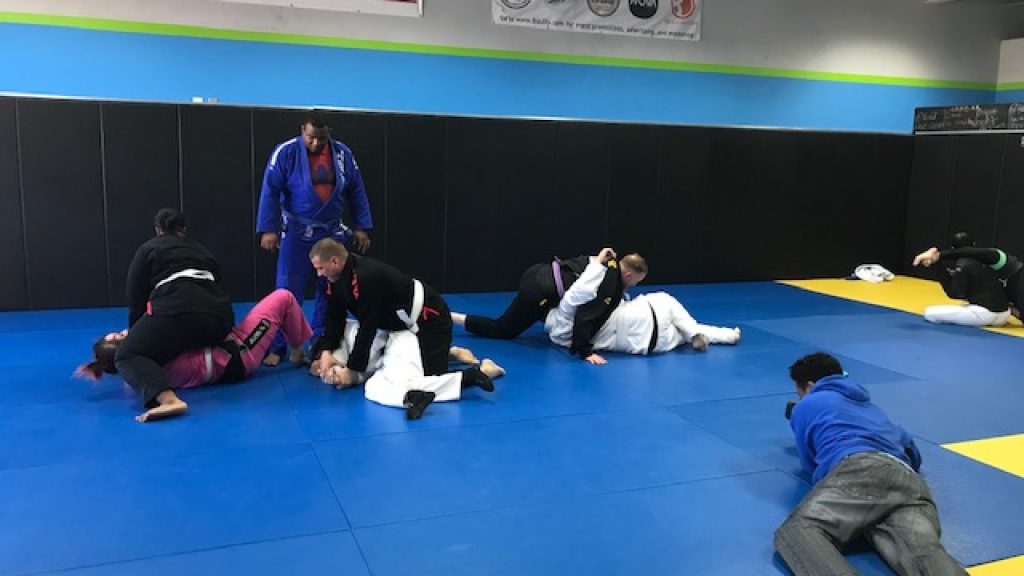 There’s no philosophy to how to stay safe in BJJ, it’s just like when you’re crossing the street: Look around, and make sure you recognize if there are any potential danger, or if you’re a potential danger to nearby pairs. This is what mat awareness is, in essence. Along with keeping a few ground rules in mind, you can easily make sure you are in a safe rolling environment.

The main thing that will help you figure out how to be safe in BJJ is knowing how seniority works in rolling. When you do the look-around before you roll with a partner, see if there are any higher belts around you. If there are, consider that running into them will mean that you need to stop your roll, perhaps even disentangle with an opponent, and reset away from them. It doesn’t matter if you’re a brown belt rolling with another brown belt, and you have a black belt and a white belt next to you – the pair with the black belt has seniority.

Another thing that’s also among the unwritten rules of BJJ is respecting competitors, particularly really active ones. There’s no point in going crazy in a roll when you’re rolling next to a couple of folks who compete a lot, perhaps even professionally, injuring them can really affect their BJJ career.

Also along the lines of seniority, the ladies have the status of a black belt. Normally if there are two pairs of ladies that are nearby, the higher belt seniority principle applies. However, if there’s just one girl among two pairs, the pair where she rolls has seniority, even if the other pair is a brown and black belt, and she is a lower belt. Figuring out how to be safe in BJJ comes down to minimizing the potential risk to people around you, and despite being very tough, BJJ ladies will always be in danger when a couple of ultra-heavyweight competitors are rolling extra hard nearby.

Wrapping up with hierarchy, we’ll take a look at some positions. In most cases, positional hierarchy applies when people area of the same belt color, or really entangled deep in a very complicated position,. The ground rule here is that the more complicated the position, the higher it is on the hierarchy. Having someone in a tornado guard trumps a pair nearby that’s just hanging around in closed guard when the two are in danger of collision. In that case, the closed guard pair will reset a bit further away, or watch out for the other two.

Most open mats are noisy affairs. People breathe heavily, there are all kinds of sounds, some talk, others laugh, there’s often music blaring on a speaker. That means that if you don’t know how to tap, you might find yourself in danger. The same holds true for people rolling next to you. Sometimes it is not possible to tap on your opponent’s body so that they know, and tapping the mats is the only option. If you hear a tap from a nearby pair you have the obligation of letting the person submitting know, since they might not be aware of it. How to be safe in BJJ during rolling extends to much more than just rolling in a respectful and careful manner.

The final piece of the puzzle is common sense. If you want to be safe when rolling, develop mat awareness by looking around and staying vigilant to what’s going on in the vicinity. If you expect others to do it, and you’re not doing it, you’re’ contributing to an unsafe environment. Just don’t do what you don’t want to be done to you. Simple.

Also, consider that some people, like the instructors and some competitors, actually make a living from training. An injury caused by someone crashing into them might cost them dearly, and three’s no good reason to justify it. Actually, plenty of people need their limbs to work, so an injury might endanger their livelihood. How to be safe in BJJ is no rocket science, but it is based on common sense, which some people tend to forget.

All in all, mat awareness is a crucial skill in your BJJ skill set that you can’t do without. There’s no point in discussing how to be safe in BJJ training if you’re not going to look out for your training partners while you roll. Simple looking around before you start rolling, and respecting the ground rules we shared above is more than enough to ensure a safe and progressive training environment for all, even if there’ are a hundred people on the mat.