Getting out of submissions is the most difficult task you can face in Jiu-Jitsu. The thing with submissions that they’re designed to make you tap while holding you firmly in place. When someone does a submission precisely, there’s no way out. Well, that’s not entirely true. There are stages to each submission and there are solutions to specific problems that each stage presence. The moment where there’s no way out apart from a tap is called the point of no return. As long as you know where the point of no return is, you can defend all previous stages in ways that address them specifically. Today’s focus is going to be on beating the Omoplata shoulder lock. We’re going to use the stage by stage approach and offer an Omoplata escape for each.

There are plenty of submission escape strategies. Some focus on merely escaping a position and getting as far from your opponent as possible. This is great for self-defense but not as good for sports BJJ. Defense is a more viable option, where you find a way to make prevent the move from working while you improve the position. While better than simply escaping and disengaging this is still not an optimal solution. The best way to deal with submissions is escaping right into a counter attack. Furthermore, having multiple defense options, all ending in a different counter is the best defensive gameplan you can utilize. So, when you’re thinking about using an Omoplata escape, you’ll have to ask yourself a few questions first.

There’s no point in doing an Omoplata escape if all you’re going to do is give up another position. Rolling out and ending up in bottom side control is one example. Instead, try to figure out which stage of an Omoplata you are in. If you’re past the point of no return, tap and get back straight into it. If you still have options though, focus on the ones which turn your escape into a counter. The idea is not to accept an inferior position just to avoid a tap. The best version of events here would be to get out of the Omoplata and end up straight into a submission attack yourself.

The Main Problems With The Omoplata

There are a few consecutive stages to the Omoplata shoulder lock. Getting into position is first. Here, prevention is what is going to help you stop the attempt in the first place. Next up, once your opponent has your arm controlled, and their legs in position, you’re in a different stage. Once they manage to get an arm on your belt, around your waist or your leg, you enter a different stage. Also, when an opponent manages to break your posture and get your head to the mats, things change significantly. All these stages have solutions to the common problem that is the Omoplata lock.

The reason why you need to choose your Omoplata escape carefully is the nature of the attack. The Omoplata shoulder lock is one of the best trap positions in BJJ. Once people manage to get to the first stage of it, they can chill and wait for you to open up options for them. Apart from getting the Omoplata, your reactions could get you in trouble with other submissions. OR, you could end up in another position that’s hard to get out of. In order to avoid these, you’ll have to use an Omoplata escape that can keep you safe and turn the tables quickly.

Achieving this, mean that you’ll need to be aware of the common problems during an Omoplata. The three main ones to focus on are your posture, your hand positioning, and secondary controls. Posture is easy to understand, the better your spine alignment is, the more you can defend. Hand positioning is crucial in escaping traps in multiple directions, as you’ll see later on. Finally, knowing where the opponent has their secondary control (belt/Gi/waist/leg) is and dealing with it is important for preventing the point of no return.

An Omoplata Escape For Every Stage

Now that we’ve broken down the Omoplata to 4 distinct stages, let’s take a better look at each of them.

The first stage usually has you on your knees, posture still intact but with your arm trapped between you and your opponent. Also, the opponent has their legs crossed, which gives them immense control over your shoulder. The central problem you need to solve here is getting your arm out while keeping your posture.

The second stage is where your opponent has most traps. You’ll have to tread carefully here. In terms of positioning, you’re still going to have your posture, but now you’re in a battle to keep it. This battle opens up plenty of follow up opportunities for the opponent, along with a few tricky traps.

Stage three is where your opponent finally gets your posture broken. Here, you’re in a position similar to the turtle, hand trapped and forehead on the mats. There is still hope but you need to be very careful what you do. What you shouldn’t do, is the usual Omoplata escape where you simply roll forward. Giving away the Omoplata sweep is bad for you for multiple reasons.

Finally, you’ll need to know how to deal with the opponent’s added points of control. The thing with them is, that unless you address them first, you won’t be able to either go for a stage 4 Omoplata escape or get back into an earlier stage that’s easier to defend.

Whenever you still have your posture, you need to focus on getting your arm free. This is really easy if your time it right. By this, I mean react the moment you know you’re in trouble. Here, you still have your posture so you have no immediate threat. The goal is to try and place your arm on the opposite side of your opponent’s body.  Once you do that, grab their thigh and start rotating to the other side, straight into a pass.

This is where things get interesting. Once your opponent has your hand tight, you know that posture is the next thing they’ll go for. the best way to retain your posture is by retreating down to the mats. However, you need to do this in a very specific manner. The goal is to sit your butt down on the mats, right beside them.  To stay safe, grab your own thigh with the trapped arm first. Once you’re down, make sure you keep your free arm hidden from their legs. If they manage to sneak a leg through, you’ll end up tapping right there.

You have two great options from that position. One is to go straight for a toehold. This is your best bet for completing an Omoplata escape for two reasons. One, you can get a tap straight away. Two, you open up the opportunity to pass directly. For the toehold, look to catch their fingers and transfer the leg behind your own head. From there, a simple twist will get a tap or a fast break. If that fails, or the opponent resists, you’re now in a position to switch to a pass because their leg is behind your head. All you need to do is turn towards the opponent and let go of your thigh. 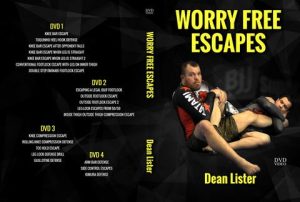 Dean Lister has many more Omoplata escapes in his “Worry Free Escapes” DVD set. Actually, he has Omoplata escapes that end up in leg locks. He also has escapes from every other submission or position in BJJ that you can and can’t imagine. It is a Dean Lister DVD after all, so I can’t think of a reason not to go and get it right away!

As you progress through the stages, you get into more and more trouble. In stage three, your posture is not as secure as before. If you do not have perfect posture, sitting back like in stage 2 is going to be impossible. Instead, you need to think about going in the direction in which your opponent is pushing you. However, there’s a wrong and a right way to do this.

Simply rolling forward is going to get you in bottom side control at best. At worst, you’ll tap to a Monoplata/Armbar/triangle choke from mount. Instead, you still want to roll out, but in a way that blocks your opponent’s attempts to follow up. To do that, keep your hand on your thigh, just like in stage two. Then, look to roll over the free shoulder instead of your trapped one. This will land you in a much better position where you simply have to turn to your side an get into a passing position from the top.

Finally, this is the best thing you can do when your opponent has your arm trapped, your posture is broken and controls your body. In most cases, they’ll either place an arm around your waist or control your belt or pants. They might even go for ankle control to stop you from rolling.

Since you’re now really close to the point of no return, you need to be very precise with your Omoplata escape. The trick is to go for a roll once again but in a completely different fashion. Instead of rolling forward you want to roll your opponent over. The added control he has over you is going to work in your favor here. Secondary controls mean that he is connected tightly to you. To get out, you need to get your far side knee and elbow close to each other and straighten your near side leg. Then, you’re going to roll like a log, over to you back. For a brief moment there, you’re going to be in a bad position, but the inertia of the roll is going to get you out straight on top of a turtled up opponent.