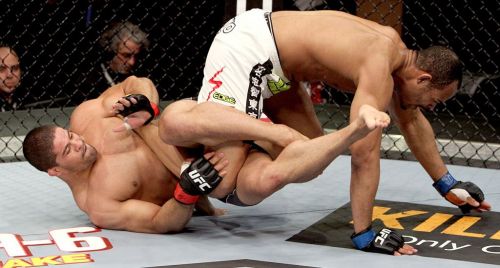 Let’s get outside the box for a little while. Like with everything else, every BJJ rule has exceptions. In fact, I don’t really believe there are any rules in BJJ, just some common principles that make things easier. Nonetheless, with everyone now believing there’s only the Ashi Garami way of doing leg locks. People tend to be content with the options they have. That, however, doesn’t mean we shouldn’t be looking to expand our knowledge of leg locks even further. And, contrary to some beliefs, leg lock setups against standing opponents are a viable way of getting a tap. They’re just not as numerous as the leg locks against downed opponents.

Nowadays, you do not have to know every second of Danaher’s leg lock instructional to be a solid leg locker in BJJ. Most coaches have a working knowledge of how the revolutionary system works, and leg locks are now a regular part of any Jiu-Jitsu curriculum. That said, it would be a shame to stop here. Yes, the system is very efficient, thought out, and proven to work. However, Jiu-Jitsu is all about evolution, and we can use the knowledge we have to further explore leg lock setups and combinations. One option is actually finishing a leg lock against standing opponents without having to “break them down to a hip“.

The Rule Of Leg Lock Setups Vs. Standing Opponents

The “rule” of modern leg locks (well, one of them, anyway) is that you need to break an opponent down to a hip to have control over their leg. That is one of the 6 foundational principles of the DDS leg lock system. Suffice to say, it makes a lot of sense, and it works. 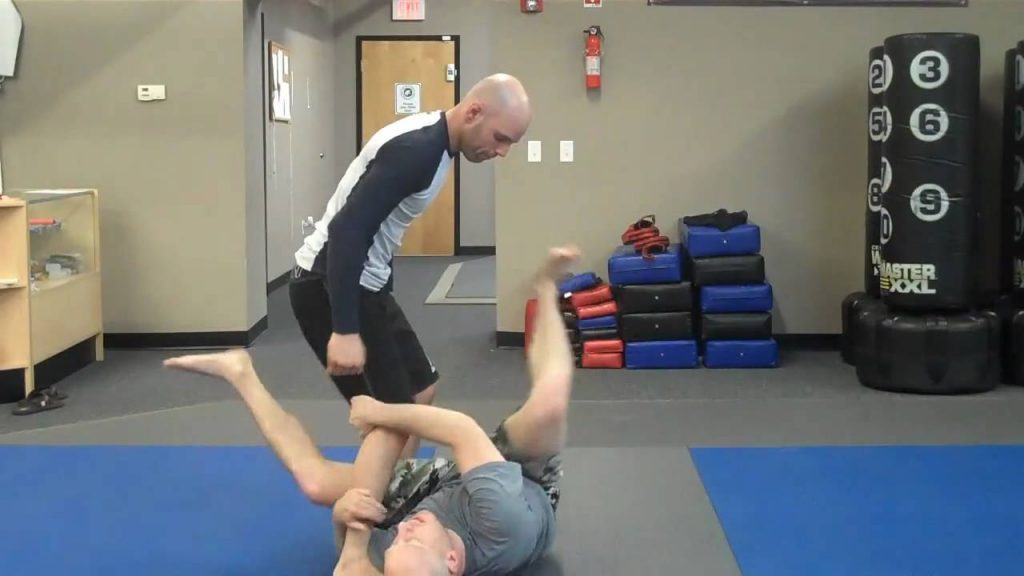 When I show people leg locks for the first time, they all tend to focus on the submission aspect of it more than anything else. This is understandable, as we’re talking about leg locks per se. However, the submission itself, or the breaking of the joint will only work with a high degree of reliability if certain conditions are fulfilled. Without going too much into the entries into leg locks I’ll just mention the basics once an opponent is down.

First and foremost, you want to control every joint of the leg, but most importantly, the hip. This is why we use the Ashi Garami or leg entanglement positions. Holding an opponent’s hip to the ground prevents them from having a base, which they can subsequently use to create motion and get out of the position. So, controlling a leg is far more important than getting a breaking configuration as quickly as possible after attacking with a leg lock setup.

When it comes to standing opponents, the reason why most leg lock setups don’t work is because of the freedom of the hips. The notion is that if an opponent has their hips free, they can rotate or kick out of any leg lock attempts you go for. This is the case in most situations, but not all of them. There are exceptions to this rule, and, like most exceptions, they’re highly efficient and unexpected ways of getting a tap.

The Exceptions Of The Rule

Rules are there to be broken, but only if you have a smart way of doing it. It took a lot of trial and error (mostly error) to figure out which of the leg lock setups against standing opponents that actually work. These are a few that exist, but let me be clear from the start – these are not part of an elaborate system. They’re simply one-off moves that happen to be exceptions to the common rule that you can’t pull off leg lock setups against standing opponents.

When and why would you go for moves like this? Well first of all, because they’re there. Not really an in-depth philosophical explanation, but still a very practical one. When you’re attacking with a leg lock setup from the guard, your opponent will be standing in most cases. So, instead of heading directly into an Ashi Garami, which would be ideal, you now have a checkpoint halfway through. This means you can stop, threaten with a submission, maybe even get it, and then if continue to the original Ashi Garami in a much more controlled manner. It is the transition when people manage to wiggle out the most. Having a submission along the way will double the chances you get of a tap, whether an opponent is standing or on the ground.

Moreover, there are different locks you can execute against standing opponents. The one thing that I still haven’t found a way of pulling off is an ankle lock. However, kneebars, calf slicers, heel hooks, and toe holds are all a possibility, if you do the exception to the rule correctly.

Enough theoretical talk. Let’s look at 4 different leg lock setups against standing opponents that have really proved efficient for me. The reason I am sharing them is that they don’t just work for me, but anyone I’ve shown them to as well. There has to be something there, then. That said, none of the setups are of my own making, just stuff I saw online and ended up pulling off successfully. Imagine how many more things I tried and failed to be content with before I figured these four out. Now, you get to enjoy the result without going through the same.

This setup works great in just about any situation when you end up with both your legs near the belt of an opponent. It does work from the closed guard, but you can also use it from most X-guard variations as well. For demonstration purposes, let’s talk to someone trying to do a standing opening while in your closed guard.

The moment an opponent plants both feet on the ground, you go for the kneebar. Choose a side and have it underhooked (usually, this is the first leg you can get your hands on). Once both feet are on the ground, simply spin around the leg, trying to hook your leg behind their butt, while keeping the other hook on the front at hip level. You have to be careful though, as the kneebar can come on while an opponent is still standing. This is one of those leg lock setups that are dangerous, so practice carefully while rolling. For the ideal finish, you’d still take your opponent to the ground and wrap the kneebar up.

This is by far my favorite against standing opponents. Given that it works from the Single Leg-X Guard, you can pretty much get there from any spot you like. Once in the Single Leg X, you want to get the foot of that leg of the ground anyway, if you’re looking to so leg lock setups. Usually, this gives opponents time to turn and try to corkscrew out. If you keep the Single leg-X guard configuration, they will achieve their goal 9 times out of 10. Since a heel hook is a twisting submission, you need to think about stopping them from rotating in the direction you’re trying to twist to. That’s what you need to remember.

Before you force them to lift the leg, you should actually lock a triangle on the leg. Knee reaping, I know, but you’re hunting for a heel hook anyway. Once you have a triangle you want to take it a step further and lock the top triangle leg behind the far leg knee. That will both lock the opponent in place and lift their leg, exposing the heel. A finish from there is very simple – just like a regular outside heel hook.

One of the smoothest things you can do is e get someone in a calf slicer while they’re still standing. What I prefer is to go for a calf slicer slicing with the forearms here, rather than the shins. This is mostly because I like to do it when opponents try to counter my leg lock setups by getting their leg out of the shin-to-shin guard and in between my legs. Since I already have the arms in place, it only takes a couple of steps to get a tap.

The key moment is getting the inside leg out wide so that you basically pull your opponent into a knee slice pass. However, before their knee hits the ground, your leg is back in play, with the foot now on the outside of the hip. No pass from there and all you need is to triangle your legs for a very painful finish. Legal for brown belts and above.

Speaking of legal leg lock setups against standing opponents, let me provide you with an alternative to the heel hook from earlier. If you want to keep things legal, you can switch the heel hook with a toe hold. However, since you need to get rid of the knee reap as well, you’ll need to improvise a bit.

From the Single Leg-X Guard, you’ll be looking to go into an outside Ashi Garami on a standing opponent. Yes, this may expose you to a leg drag, but only if you don’t use the triangle. With this setup, you simply switch the triangle to the outside, ad hook the top leg in the opponent’s far hip. Now you can lift the leg and push the toes to the butt. This both sets up the toe hold and opens up enough space for you to get eth figure four grip. Finish as you would a toe hold.

Leg locks are fun and they’re still far from being completely discovered. There’s so much to improvise and experiment with them, that I feel we haven’t even touched on the best leg lock setups yet. Getting taps on standing opponents is one of my favorite ways of utilizing leg locks. The reason they work is easy – in all of them, you have at least one foot frilly planted on the ground. Well, that and the factor of surprise.