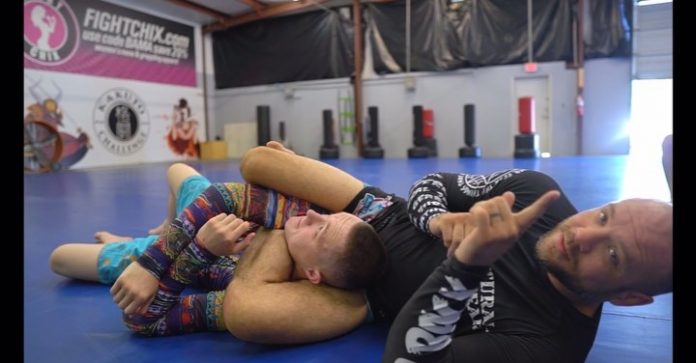 The triangle choke is a real hallmark of Brazilian Jiu-Jitsu. Despite the fact that it was used in old Judo curriculums, the triangle never really broke through in martial arts until BJJ came along. The UFC, Mel Gibson in Lethal Weapon, and the Gracie family’s logo is all it took for this strangle to establish itself as one of the defining techniques of Brazilian Jiu-Jitsu. Over the years, it has developed, and today, we see the rise of what is arguably the most efficient variation to date – the rear triangle choke.

Up until a few years ago, the rear triangle choke was a move that people use d sparingly in Jiu-Jitsu or MMA. The front triangle, and even the reverse triangle to a point, was much more utilized options than the rear triangle. A part of it may be because we usually got there form the back, and in BJJ, people are taught to never give up on back control. However, with the evolution of BJJ, the rear triangle transformed from a choke to a very useful position of control that opens up lots of options with next to no effort.

First and foremost, let’s look at the mechanics of the rear triangle choke. I’ll start talking directly about the position, and I’ll cover entries later in this article. As with all triangle chokes, the rear triangle utilizes a closed wedge around the opponent’s neck. What makes it really potent is the fact that the wedge includes one of the opponent’s arms, making it extremely difficult to get out of. 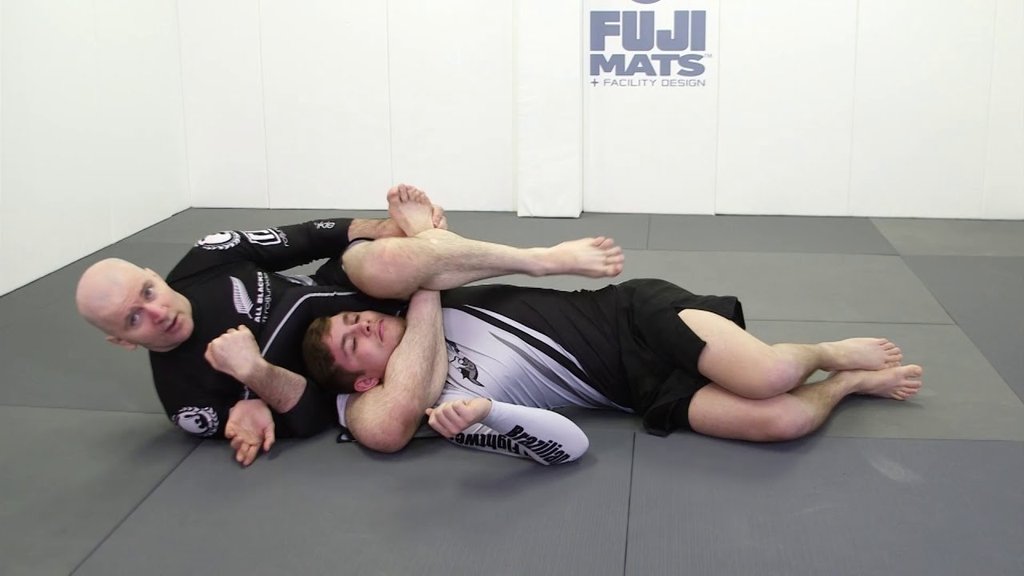 As the name suggests, the rear triangle is done from behind. The configuration you’re looking for is that same as with every triangle choke. What you basically want is to have one leg on the opponent’s shoulder, with the shin running across the neck to the opposite side. The knee of the leg that’s directly on the neck should be on the ground. This means that you’ll close the triangle on the top side, which also happens to be where you trap the opponent’s arm. As with all triangles, the point is to place the back of the knee of the top leg on the ankle of the bottom one, for the most powerful lock. Furthermore, if you can wedge the foot of the top leg behind the small of the opponent’s back, you’ll accentuate the lock even more.

Why is the rear triangle choke better than the front, side, or reverse variations? To begin with, you’re behind your opponent, which provides you with a great advantage. Moreover, you remove any chance of an opponent posturing or using strength to get out of the choke. ON top of it all, you control how, when, and if they can turn to their side, which gives you complete dominance over the opponent. And that’s before you even think about tapping people out with the rear triangle choke.

The rear triangle choke is something you can actually get from a host of different positions. Of course, setting it up from the back is the most utilized entry. However, you can get there from virtually anywhere, like for example top side control or turtle. In fact, the ability to get to a position from as many different spots as possible is a huge determinant of how effective a move is going to be. It suffices to say the rear triangle choke is one of the most effective moves in modern-day Jiu-Jitsu.

When you have someone’s back, the rear triangle choke is a perfect go-to, if your opponent turns out to be a defense specialist. Even though you might have a superior position, sometimes, choking from the back is next to impossible. In fact, getting a choke from the back is one of the hardest things to do in BJJ. The Rear triangle offers a great way to still keep back control, and transition into a different set of submissions.

The main thing when setting up the rear triangle from back control is getting that first leg over the shoulder. And it is all about the grip. Using a cross grip is the best way to set it up as the elbow of the arm needs to stay close to the opponent’s ribs in order for you to get the leg over. Plus, a cross grip means your arm is in place to help the leg thread through and wedge the opponent’s arm in. Once you have it, you simply lie down to the side of the top leg and start working for your rear triangle choke, or other available submissions.

By far, my favorite and most used setup. The setup is from crossface side control and utilizes an Americana to get into place, which makes it even more fun. The goal is to use your arms to set up an Americana on the far arm, but without releasing the crossface. This opens up space for you to start forcing the opponent to turn away from you. You then head for an S-mount like position, with your top leg going deep under the head of the opponent. At all times you keep a grip on the far arm to prevent them from wiggling out.

You only let go of the grip on the far arm, when you’re ready to fall to your side, in order to lock the rear triangle choke up. It is cruise control from thereon.

When you can’t really break a turtled up opponent down to get them back in a meaningful way, the rear triangle choke is always there. The key moment is to control both hands of the opponent, form the usual seatbelt style grip configuration. The goal is to pull them towards the “over” side so that you can use your leg to hook the near side arm. With that, half the job is done.

You now shift your legs so that you sit back down, all the while holding on tightly to the “under” side straight grip. You can simply transfer the leg up like previously, or make it a lot more uncomfortable by extending the top arm first. To do that, you just hug it with both your arms across your own chest. Now you can lock up the triangle and finish at will.

Submitting With The Rear Triangle Choke

The rear triangle choke itself is easy to get, but people usually get the pressure wrong. If you simply squeeze with your legs you won’t get much. Sure, you’ll get the odd tap or two, but that’s not what you’re after. Instead, it is a three-step process. First, you pull the arm that’s trapped towards your chest. This places their shoulder in a position to compress their carotid artery. Then, you look to press down with the top leg, looking to hook as far behind the back as possible. Finally, if there still isn’t no tap, you’ll start moving your knees towards one another. This is certain to get a tap from anyone!

The amrbar from the rear triangle can be tricky to get. That’s because you need to be locking an elbow that’s pointing to the ceiling, rather than your groin. But it doesn’t have to be that way. The simple rule of armbars still applies-their thumb should be pointing to the ceiling. This creates torsion in the arm to increase the presser that you place on the elbow for a quick and very painful submission.

One of the most brutal, unexpected, and downright evil things you can do to a person from the rear triangle choke position. This is one of those times when you use your control to get the opponent with both shoulder blades to the ground. The goal is to reach up and look to grab one of their legs at knee level. To achieve this, you might need to pick your hips off the ground, which makes things really uncomfortable for the opponent. Ultimately, what you want to achieve is to compress their body so much that no air is left in the lungs. It is a brutal catch-wrestling style submission that can turn into a kneebar if you run into an opponent that somehow doesn’t tap to a lung compression. I haven’t found one so far.

The rear triangle choke ticks all the boxes of a top BJJ position – you can enter form a multitude of other positions, you can control an opponent, decide to transition towards the back or top control, or finish in a myriad of ways. What’s not to like? The rear triangle is getting the reputation it derives, and with many people messing around with it I can’t wait to see the next step in this move’s evolution. Stay tuned!