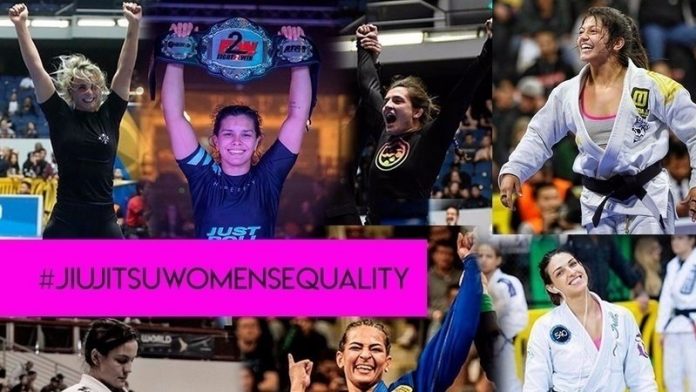 In today’s world, being politically correct is becoming a real nuisance. There are even instances when being ‘politically correct” can actually cause real danger to people. Still, there are some aspects of the modern lifestyle that require no second thought, the equality of both Jiu-Jitsu women and men in any possible way is one of those aspects. It is a given that gender, just like race, religion, etc should not be an issue in any sort of way. This is particularly true when it comes to sport. unfortunately, we still seem to be holding on to some misguided old ways, and one of them is sadly still at play in BJJ. It is the issue of equal pay for both male and female fighters. Jiu-Jitsu women are having none of it, and we’re throwing our support with them.

There’s no place for politics in Jiu-Jitsu. I’m a firm believer in that, and I think politics will only ruin this beautiful sport of ours. Still, some things aren’t even politics, but boil down to just common sense. We have people of every ethnicity, religion, race, etc training. The same rules apply for all of them, so why would we single out women? And still, it happens, and it does so at the highest levels of the sport. Apart from a few organizations out there who are actually leading by example, like Fight2Win, it seems others are really falling behind. Equal pay for every professional athlete should be a no-brainer. By equal pay, of course, I mean equal criteria for determining how much someone gets. In that sense, Jiu-Jitsu women have been wronged, and it is time to rectify that.

Contents hide
The Best Sport In The World
The Petition For Jiu-Jitsu Women Equality
A Few Examples Of Inequality
Why Are We Even Talking About This?
In Summary

The Best Sport In The World

Brazilian Jiu-Jitsu is definitely the best sport in the world. It is all around the globe and has millions of people training and competing. Of course, among those, you’ll find both men and women. In fact, Jiu-Jitsu si often portrayed as the best possible option for women. I firmly believe in this. It offers women a realistic and practical way of self-defense. It is actually engineered to beat larger people and is the perfect fit. Moreover, it offers the same benefits as for everyone else, in terms of lifestyle, comradery, physical training, etc. 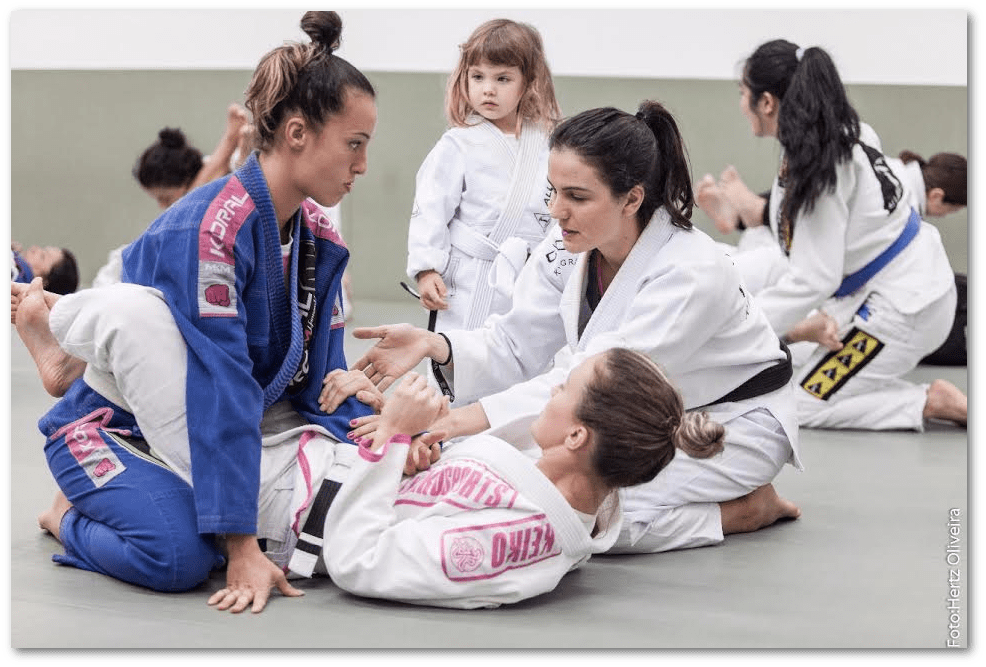 However, if we take a closer look at the perfect picture painted above, we’ll see a glaringly obvious problem. At the professional levels of the sport, Jiu-Jitsu women are actually shunned. It is not that they don’t get the same opportunities as men, but rather a question of recognizing this. And those rep[sosnible ar at the very top fo the Jiu-Jitsu world. If you work at an office, and you have a female colleague in the same position as you, will you get different salaries? In most places in today’s world, the answer is no. Still, in BJJ, the opposite seems to be true, and since we’re in the 21st century, I think it is time we change it.

In that sense, it is not like Jiu-Jitsu women need our help. They’ve actually have everything figured out and are easily winning the fight for their equality within the sport. The issue that bothers me is that it had to come to such a struggle, and the use of petitions to raise awareness and get what’s obviously more than deserved.

The Petition For Jiu-Jitsu Women Equality

Two of the world’s greatest Jiu-Jitsu women competitors, Ana Carolina Vieira and Luanna Alzuguir have set up an actual petition you can sign. It seems it takes pointing out the obvious in order for people to react. In their petition, though, they do address some key points, and equal prize money is just one of them. To be really honest, one of the points the outlined has actually been bugging me for a while now, making no sense whatsoever.

The petition is for Equal Pay And Opportunities for Jiu-Jitsu women. It doesn’t get much more clear cut than that. In fact, the ladies have a great definition of the word athlete by the Merriam-Webster Dictionary quoted in their petition: Athlete: a person who is proficient in sports and other forms of physical exercise. And there’s no mention of gender in there whatsoever. The issues outlined by Vieira and Alzuguir are in terms of the inequality of prize money, the fact that women’s divisions are fewer, with fewer competitors and usually crammed as well as the opportunities for taking part in professional events and tournaments. All are more than valid points.

As you can see, there’s one point in there that’s baffling. When I was writing a preview of the ADCC earlier this year, I noticed that women’s divisions are not only two (under and over 54 kg) but the number of competitors is half of that in the men’s divisions. While 16 per division grapplers get to compete in 5 male weight divisions, only 8 women per division get an opportunity. This is not restricted to the ADCC, as other promotions also usually try and cram women in large divisions, often even without regard to belt level. And it is not like there er only a few Jiu-Jitsu women competitors out there. In fact, there are around 300 female black belts in the world at this moment. It’s not like there are not enough people.

The final point is also a huge one, as it has to do with motivation. Of course Jiu-Jitsu women won’t look to compete as often. They are getting less money for doing the same job as their male counterparts. And in most cases, women’s matches actually end up being much more entertaining. So far, events like the IBJJF Grand Prix, UAEJJF King Of The Mat and ADCC have failed to provide the same platform. For example, there’s no open weight division at the ADCC for the ladies, and both the IBJFJ and UAEJJF ignore women when it comes to their paid pro events.

Why Are We Even Talking About This? 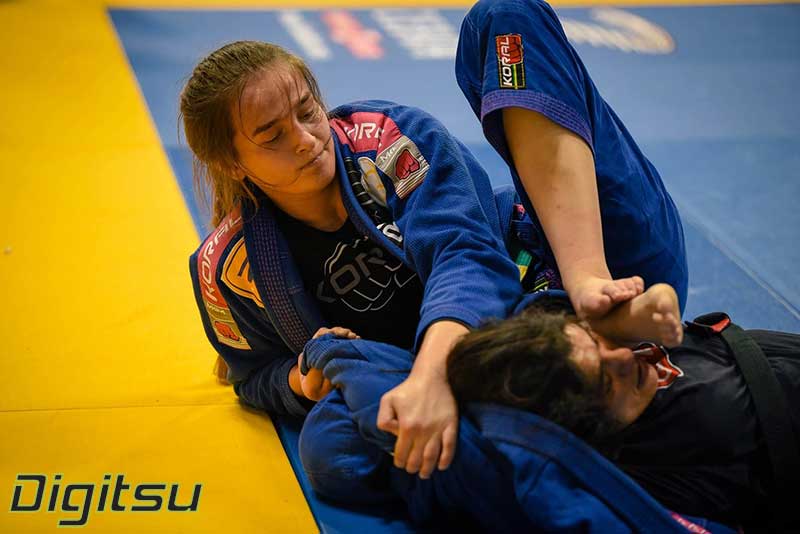 To be honest, I have absolutely no idea why we actually need to talk about things like this. I’d much rather write articles about techniques and tactics. An article like this might have had it places a century ago. And still, here we are. Let’s keep a clear mind and not sabotage our own sport. Jiu-Jitsu women are just as much a part of the BJJ community as men are. There’s no need to downplay anyone’s importance. Moreover, the male athletes all agree on this point as well, so there; no real reason why promotions aren’t responding in a positive manner. Once again, I’ll single out Fight2Win and EBI, and for all the good reasons. Both promotions give a huge and more than a fair platform for Jiu-Jitsu women to do what they do best – grapple.

In addition to Ana Carolina Vieira and Luanna Alzuguir’s petition, there are other movements fighting for equal pay. World Champion Dominyka Obelenyte also launched a campaign for equal pay. She even managed to get the IBJJF to re-evaluate the prize money they give out. Despite the apparent success, it seems that we need a bit more to finish the job. So sign the petition without wasting any more time, and let’s get back to rolling.

There is a Dominika Obelenyte DVD out there that is just as good, if not better than most male instructionals. Her take on the spider guard, and in particular Omoplata is explained in detail in the “Spider Variations And Domoplata” instructional. All the submission hunting secrets the founder of the Domoplata are in there!

A petition like this is obviously what we need. Let’s all try and contribute to what’s fair for Jiu-Jitsu women, and settle the issue once and for all. If it takes a [petition to achieve it, then a petition it is. Let’s hope that in future events, we’ll see more women’s divisions organized as precisely as men’s. Let’s hope that pro grapplers will receive equal pay regardless of fo gender. Finally, a shoutout to all promoters to increase the motivation for Jiu-Jitsu women to compete. Trust me, the more of these bad-ass ladies we see on the mats, the better BJJ is going to be for it!