Say what you want about Marcelo Garcia, but he is like a pit-bull in anything he does. Just like when he fought, once he sets his sights on to something, there’s no stopping the man. In the case of DVD instructional, we’re all ecstatic that Marcelo has early decided to dedicate to issuing a brand new series. So far, we saw him explain signature positions like the butterfly guard and the North-South choke, the latter of which has never been shown better before. Now, it is time for a third instructional in quick succession – the Marcelo Garcia Guillotine Choke DVD is now out and about. And it is just as juicy as his previous releases, if not more!

If you roll No-Gi, then there’s no way you’re not relying on the Guillotine choke. It may just be a way to execute a takedown, get the back or hit a sweep, but that Guillotine always seems to be there in No-Gi. In fact, there are not just many ways to use it, but also plenty of variations on the move. And three’s one man out there that knows them all, and then some! The Marcelo Garcia Guillotine choke is the stuff of legends, the choke every ADCC grappler that ahs went against the Brazilian tried to avoid like wildfire, in most cases without much success.

With Marcelo Garcia, it is either everything or nothing. The man went without issuing an instructional for more than a decade, instead of focusing on short clips that left people frustrated. It wasn’t a bad strategy though – if you want to learn Marcelo’s secrets, go train with him. Luckily, for those of us that are not so lucky to have access to his Academy, or to any of his black belts, he obviously reconsidered. And, Marcelo being Marcelo, now that he started sharing, he really doesn’t hold anything back. 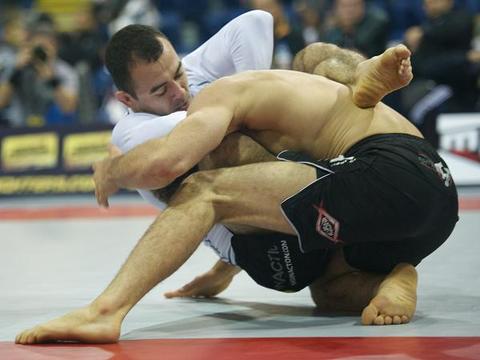 This Marcelo Garcia Guillotine Choke DVD is the complete guide to everything you’ll lever need to know about this fundamental grappling choke. It is one of the most reliable chokes to use, and, despite some people’s opinion, it does work perfectly even with the Gi. In fact, the power of the Guillotine choke is in all the variety it comes with. There’s so many of them, that you might even get lost at some point. And that is where Marcelo steps in.

Marcelo Garcia is so good at the Guillotine choke that there’s variation named after him – the Marcelotine. In fact, it is so effective, that it is the nastiest guillotine you can get. However, apart from that, Garcia knows everything about the low elbow guillotine, the ten-finger grip, arm-in variation, and any other guillotine you may think of. And, as you might expect, they all fit perfectly in a system he uses which leaves absolutely no room for escape. Finally, after decades of waiting, the Marcelo Garcia Guillotine choke details are no longer a tightly kept secret!

The Complete Marcelo Garcia Guillotine Choke DVD  is just what the doctor ordered. If you do not have much experience with Guillotines. It is the perfect way to start. For those of us that have used them more or less before, it is a great source to learn new things and re-learn some old ones in the correct manner. That said, Marcelo did an outstanding job organizing this DVD in a very simple manner.

The Instructional has four different volumes, with each focusing on a couple of Guillotine related subjects. There are Guillotine setups from virtually anywhere, starting at standing, transitioning through different guards, and ending with top positions setups. Like side control. Moreover, Marcelo shares one of his best kept secrets so far – how t escape and evade getting caught in a Guillotine choke.

With takedowns, it is pretty easy – Guillotines are a great way to deal with wrestling takedowns. The entire first volume of the Marcelo Garcia Guillotine chokes DVD addresses the famous Guillotine counter to single and double leg takedown attempts. There are 9 chapters total, and, with next to no introduction, Marcelo jumps straight in the deep end.

The first 5 chapters detail all the enticing ways in which you can use a Guillotine to stuff a single leg takedown attempt. Of course, Marcelo doesn’t’ stop there, providing different ways of finishing the move at different stages of the takedowns. The same is true for the double leg, where, in 4 chapters, Garcia will teach you how to choke anyone that attempts to grab your legs.

There’s no more recognizable spot for setting up Guillotine chokes than the butterfly guard. As it seems, this s the guard most submission specialists like to use to set submissions up, particularly in No-Gi. Marcelo’s Butterfly Guard is notoriously effective, and was, in fact, the focus of his first DVD instructional after the extended hiatus.

Looking to paint a complete picture of how you can use the Guillotine, Marcelo doesn’t just go over setups from the butterfly guard. Granted, he has almost half a dozen different ways of lifting your opponent into a tight Guillotine, which also, varies from case to case. However, he also shares just as many ways of defeating someone’s butterfly guard by utilizing – a Guillotine choke.

This is something you might not have expected, even from a Marcelo Garcia guillotine Choke instructional. While top positions are often used to set the choke up, it is mostly the top Half guard, or perhaps the mount. Not many people op[t for a Guillotine from side control, but then again, Marcelo is not most people.

In this part of the instructional, he focuses on some extremely cool and innovative ways of catching people in a guillotine when in side control. So much so, in fact, there are options for finishing from top or bottom, depending on what your goal is. Moreover, he also deconstructs the turtle, and how you can beat the turtle guard with a very simple guillotine setup.

This is also where Garcia does a gradual transition, switching in the last few chapters to the essentials of escaping Guillotine chokes which is the subject of his next, and last volume.

I guess this is the volume where most people will find the most useful information. There are plenty of guillotine choke instructionals out there, but very few offers escape details. In fact, this is the only DVD that covers more ways of dealing with different stages of a guillotine choke than any other out there.

Once again, Marcelo uses the same positions as before as examples. That means you get to learn how to escape when in the butterfly guard, turtle, side control, and the closed guard to name a few. Most of the focus is on butterfly guard escapes, as there are plenty of setups form both top and bottom, as we saw earlier.

If you really made it to the end of this review, you must be convinced by now that getting a Marcelo Garcia Guillotine Choke DVD is a good idea. For most people, it is a no-barrier even from the moment they read the title. It was the case with me, and I have to admit, I went through all the footage in record time, it was that good! As far as the Guillotine goes, it is a quintessential BJJ move that everyone needs in their arsenal, even those training only with the Gi. Actually, they might just need it more. 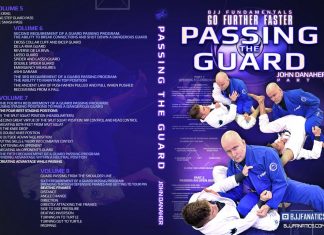 BJJ World - 0
I love leg locks and front headlocks just like the next BJJ guy or girl, perhaps even more. However, I have been waiting for...