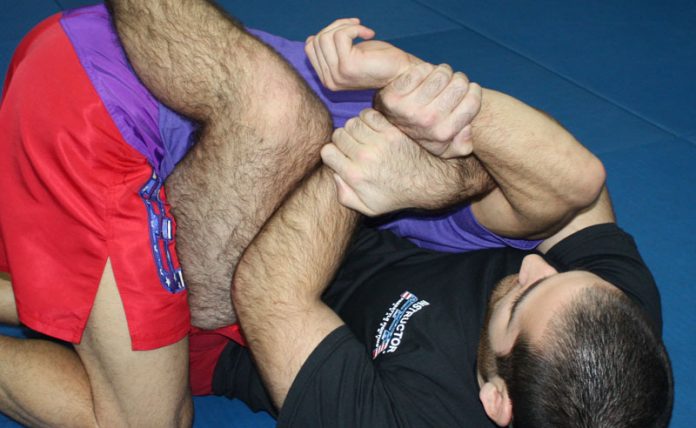 How often do you goa about using the Kimura trap system? I’m not just talking about hunting Kimuras here. Instead, you can use the trap system to open up a bunch of other attacks, or even finish the original Kimura. This system is one that most people stumble across, whether it is intentionally or by accident. The fact of the matter is that the system works perfectly, but not many people spend time training it specifically. The system was hugely popular at a certain time but then faded a bit. That is strange because the Kimura trap system is that it is still very much applicable in all Jiu-Jitsu situations. So, let’s get back to it for a bit.

I personally am a huge fan of the Kimura trap system. The way it was presented to me was a part of a single leg defense. It turned this high-percentage takedown into the perfect counter-attacking position. A bit of experimentation and some digging taught me that the Kimura trap system extends to much more than just one trap and one counter in one given situation. In fact, I’ve used the Kimura trap successfully to sweep people, submit people, pass their guard, get their back… IN other words, the Kimura trap system opens up pretty much every door you can think of.

The Power Of The Kimura

Marcelo Garcia might see the Kimura as a strong man move, but it has been proven to work throughout the years. And not just for the buff guys. The move itself is an old submission, one dating to ancient wrestling. There’s no real specific geographic location to pinpoint. The variation we use today is one that comes from Judo. Conversely, it carries the name of the person that actually managed to pull it off against Helio Gracie. Mashiko Kimura was a formidable Japanese Judoka who also engaged in professional wrestling. In 1951, Helio Gracie challenged the Judoka to a match, which ended up with Kimura winning by a bent armlock. In fact, he broke Helio’s arm and his brother Carlos threw in the towel. The Gracies later adopted the move, naming it after Kimura, in honor of his big win.

In modern BJJ, the Kimura is a staple submission, one that’s taught to people very early in their Jiu-Jitsu journey. The move is particularly useful in BJJ as you can get a Kimura from virtually anywhere. The closed guard variation is where most people start, but the half guard is where this move truly shines. You can get it from both top and bottom, as well as from most side control variations. As a submission, the Kimura is powerful and works with a high percentage, but is not too difficult to defend.

However, the Kimura is much more than just a simple arm lock submission. Granted, this is the most desired version of the Kimura. However, it also serves as one fo the best positions of control in JIu-Jitsu, even though it may not score points by itself. The Kimura trap system is the perfect example of how the Kimura can be used in ways that go beyond its original use as a submission. In fact, the Kimura trap system is one of the most intricate trapping systems available in Jiu-Jitsu. That, and there are so many more Kimura variations that were born out of the trapping system.

How The Kimura Trap System Works

The Kimura trap system, as I said is an intricate one and it requires a lot of finesse. However, in essence, the system can be simplified. So much so, that a white belt with fairly little experience can use it to great success. The key thing with the Kimura trap system is how to hang on to the Kimura while doing transitions around your opponent. For that, you first need to understand the Kimura.

Executing a Kimura in BJJ requires you to place your arms in a “figure four” configuration around an opponent arm. The breaking pressure for the submission comes for rotating the arm towards the opposite side shoulder. That inevitably leads to the shoulder you’re attacking popping out of its socket. This is exactly the movement people will try to prevent. Most often they try to grab on to their other arm or the belt or parts of their Gi when available. This can make finishing the Kimura extremely hard but opens up the Kimura trap system. It also brings us to the first and most important thing to know about the Kimura trap – how to hold on. The trick is in extending your arms. The straighter they are, the tighter your Kimura trap will be and the harder it will be for an opponent to escape.

Some of the usual applications of the Kimura trap in Jiu-Jitsu is in defending the single leg takedown or transitioning to the back. In terms of a single leg, the positioning of your opponent’s body offers you the perfect option to warp a Kimura grip on their arm. While the inside arm is usually the target, the trap works on both sides. Form there, any single leg that succeeds will actually open up Kimura submission options or easy transitions for you. One such transition is going to back control, off of a Kimura grip that you’re holding with your extended arms. All it takes is lying on your side like that, and the opponent trying to escape. This alone will get you straight on their back.

This is definitely not where the Kimura trap ends, though. If you want to develop your own system, simply get to the Kimura, and hold on. I’d suggest starting in the North-South setup, as it will be easiest to practice control from there. One thing I really love to do form a North-South Kimura trap is going for a scissor choke. Instead of trying to get to the back, which is not easy against seasoned opponents, all you need to do is lie down on your side. Then, place both your legs on each side of the opponent’s neck, top and bottom. The old catch-wrestling scissor choke works like a charm from there, especially with you holding on tightly to the Kimura.

One modern transition is going into an Ashi Garmi from the Kimura trap. Whether you do it on your own, or the opponent tries to survive by pulling you into half guard variations, you’ll get an opening to transition. Opponents will usually pull you into deep half.  moreover, they’ll try to hide their arm under their leg to stop the Kimura. This is the perfect moment to actually let go of the Kimura trap and your opponent will find themselves stuck form their own defense. All you need is to now hug the leg and you’re straight into the Inside Senkaku. We all know what follows from there.

Finally, my absolute favorite use of the Kimura trap system is to pass the guard. The same works from the bottom though, and you can use the strap to execute sweeps. However, when it comes to dealing with the half guard, or modern butterfly and shin-to-shin guard variations, the Kimura trap system is my go-to. Whatever your opponent is trying to do form the bottom, all you need is the figure four Kimura grip. Well, that and the all-important extension of your arms. Whether you roll through, fall down or stay on your feet and maneuver. You’ll get one of the easiest passes of your life. If you time it all right, you might even end up with a Kimura submission at the end of it.

The Kimura trap system can be as easy or as hard as you make it. All it takes is spending some time in it, and figuring out how to hold on to your opponent. That’s why North-South is a great starting position for practicing the Kimura trap as opposed to the bottom or from standing. Once you’re comfortable, the opponent’s movement will open up different opportunities for you. All you need to do is just lay there holding on to the Kimura.