At one point in time, most people involved in Jiu-Jitsu are going to attend a BJJ tournament. Regardless of their motivation behind signing up, it is an experience that is as much a part of Jiu-Jitsu as training and rolling. That said, going to a BJJ tournament without preparing kind of defeats the point of going. If you’re going to step on the mats, whether it is your first or hundredth time, you need to be prepared. And by prepared, I mean mentally and technically ready for anything you might come up against. Yeah, this includes being prepared for unexpected surprises as well.

Competing in Brazilian Jiu-Jitsu requires you to put some time and effort in your preparation. Leading up to a BJJ tournament you’ll need to work in a very precise and organized fashion. It is your instructor’s task to help you understand exactly what you need. Why should you always have a game plan ready for a competition? Because going in blindly is not only going to end up in you losing, but it’ll most likely take away your will to compete. There’s nothing worse than giving up during a BJJ match because you have no options left. Whenever you’re in such a situation, it is a clear reflection of your lack of preparation and thought leading up to the competition.

For most people, having a game plan is the same as bringing they’re A-game to the tournament. In truth, your A-game should be just a fraction of your complete game plan. It might be the most important fraction, but still, it does not make up the whole. In most cases, especially with seasoned competitors, your A-game is not going to suffice. You’ll have to revert to a plan B in certain situations or even improvise completely.

What to Expect At the BJJ Tournament

Never let your “success” during training and rolling to make you think you’re actually better than you are. This holds especially true for higher ranked belts. Remember that at a BJJ tournament you’ll be up against people at your level, all fo them bringing their A-game. The moves you easily pull off on lower belts, or even those equal to your rank in training, are most likely not going to be enough in a competition setting.

Grappling tournament area wild affairs. People that are there to compete have just one goal in mind – winning. They won’t’ be as inclined as your training partners to tap or easily accept a pass or sweep. Furthermore, they’ll be doing their best to smash you, submit you and completely block your escape attempts. This raises the bar of expectations much higher. it is not that it’s different from rolling, it is just more intense. And, the intensity is something you must factor in your gameplan.

In your first match at a BJJ tournament, you’ll be up against a rested opponent, weighing roughly as much as you and at a similar skill level. They also have grappling training and techniques that they favor. They also have an A-game that they’ll be trying to impose on you, against your will. This means you’ll need to be adaptable and rely on tactics and strategy as much as you do on technique and athletic strengths. What you can expect is well-prepared opponent’s that are looking to go right through you and your A-game. And the most dangerous ones are going to be those that can move past their best moves in order to get one over you.

While it is not enough on its own, you absolutely need to have a complete A-game ready for competition day. While the term itself is self-explanatory, let’s look a bit deeper into what exactly a BJJ game is. As you know, all grappling matches start standing. That means you’ll have to find a way to get the fight to the ground and end up in your preferred position. As far as positioning goes in general, you have two options – fighting off your back or being on top. In all three of these aspects of a BJJ game, you’ll need to have your top offensive and defensive moves.

Listening to Kurt Osiander is always a good idea. The legendary coach has immense BJJ knowledge of fundamentals, along with a sprinkle of originality. “Fundamentals Of A Jiu-Jitsu Renegade” is a DVD instructional set that has all the building blocks of BJJ. It also has great variations to help you define your tournament A-game.

There’s no point in going to a BJJ tournament without having some fundamental takedown knowledge. You may like wrestling takedowns, Judo throws or even to pull guard. All are viable options as long as you’re comfortable on your feet. In order to hit off your A-game immediately, you’ll need to understand how to win the gripping battle so that you can set your takedowns up. 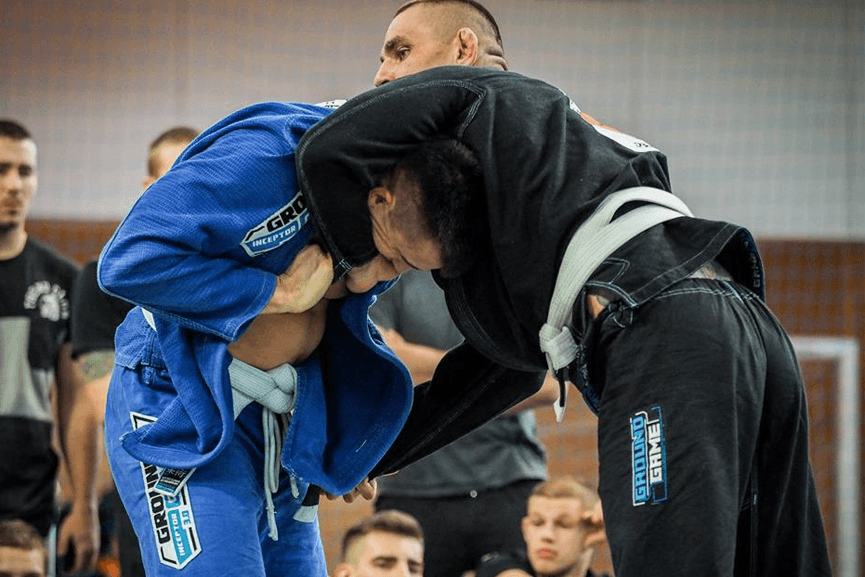 After you’re in position, the best outcome is to execute your takedown and finish in your preferred position. If you like to fight from the bottom, pulling guard is the best option. Conversely, going for to position means you need to find a way to throw or take the opponent down.

Defensively speaking, you need to be ready for the opponent to attack first. Let’s say they get better grips before you set up. You need to understand what they’re after so that you can defend long enough to go for your favorite move. This means recognizing whether you’re up against a wrestler or Judoka and knowing to counter. Sprawls and shifting weight from one leg to another are crucial concepts you have to master.

If you like ending up on top you need to know exactly where you want to land. If you go for a double leg, for example, you need to make sure you end up in side control. From side control, you should either look to finish or get to mount or the back. From there on it is all about your favorite ways of finishing.

Form a defensive standpoint, be ready for your opponent’s guards. While ending up in the guard is definitely not a preferred choice, you need to have a pass ready to go. Actually, you need three – a closed guard pass, an open guard pass, and a half guard pass. Those are the three spots where you might land after your takedown, or where your opponent might aim to escape to. Imagine executing a perfect power double and instead of hitting your favorite side control choke, you end up in the top half guard for the reminder of the match. Not A-game material.

If you pull guard in a BJJ tournament, you need to make sure you know how to play both open and closed guard. it doesn’t matter if you prefer one of them. Pulling guard, especially after the purple belt, rarely guarantees you’ll end up in closed guard. Submitting your opponent is, of course, the best way to go. However, if you prefer to sweep, make sure you have sufficient follow-up options.

Defensively speaking, know how to prevent most passes that your opponent might try. If you end up pulling guard against a passer, you’ll have a field day if you’re not ready to play a little defense. Guard recovery and retention need to be on top of your list, well above submission hunting.

Your BJJ tournament B-game is the selection of moves, techniques, and concepts you use when things do not go according to plan. The B-game comes into play whenever you realize you’re caught in the opponent’s A-game. If you do not have a B-game ready, you’re setting yourself up to fail. It may not be in the first or second match, but as the day goes by, you’ll hit a stumbling block for sure.

The B-game is what you need to have ready to use in order to get back to your A-game moves. You can see why it is just as essential to a gameplan as you A-game, if not more.

You’re up against an opponent at a BJJ tournament and, the moment the fight starts, they get their takedown in. You couldn’t even flinch, let alone sprawl. Your own A-game requires you to be on top in order to be maximally efficient. Now, you’re stuck on the bottom, with a top position expert mauling you. What you need is a good way of preventing your opponent from advancing. That means having a closed or open guard variation drilled so good that you get it while you’re falling down. The ultimate goal is, of course, going to be to sweep so that you return to your preferred top position and go for your A-game.

In the opposite scenario, where you like to pull guard, but the opponent was faster, you’ll have to find balance. As a bottom player, you should know that submission and sweeps are the two main things you should worry about. Now that you’re on top, though, it would b stupid to go on your back. So, you need to have at least a couple of guard passes ready for just such occasions. Your B-game in this instance should include finishing options form the top or at least routes to top positions like back control.

If you’re a bottom person and you end up on top, you’ll need to quickly react and stabilize your position. IN most cases, you’ll be in closed or open guard and you’ll need to pass the guard as efficiently as possible. Your best bet is to threaten with submissions along the way so that you confuse your opponent. 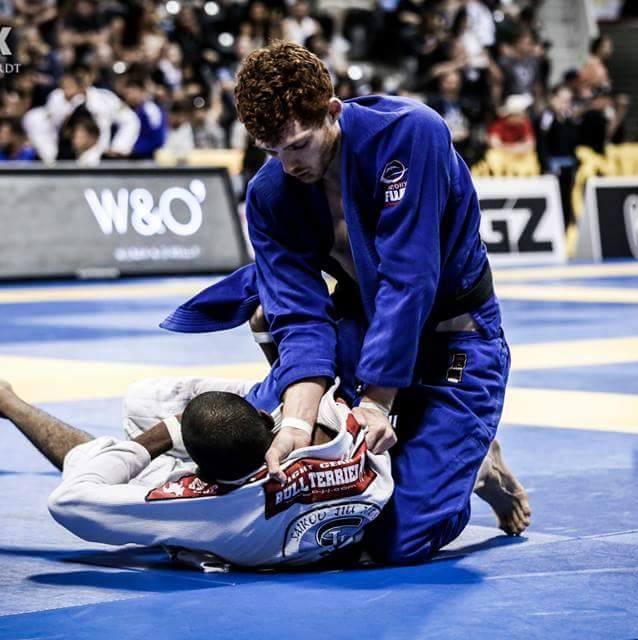 In a BJJ tournament, it is not advisable to go down to your back once you’re on top. This is especially true from the guard. If you do, you’re both gifting your opponent points and improved positions. If you’re so dead set on hunting from your back, do not go there unless you’re in mount or side control. Even then, your best bet is to use an A-game submission but know how to hunt for it from the top as well. A good example is the cross collar choke or the armbar. Getting a cross collar choke from mount means you can safely roll to your back without giving away points.

As before, the top or bottom positions tie into the takedowns. It may ba takedown or even a scramble that gets you to the ground but in your opponent’s A-game instead of yours. If you’re a top player stuck on the bottom, you have to follow a checklist. Your B-game should be all about safety first. Being in bottom side control, for example, means you need to stay safe from submissions first.

Only when you have your limbs and neck safe, and your position secure, you can think about getting out. Here, you need to have a go-to escape that works like a charm. the goal is to get back up and get the top position as fast as possible but in a safe and controlled manner.

Remember that A and B are just the first two letters of the alphabet. The highest-level black belts use all the letters in the alphabet when they’re devising their gameplan. The most important thing is to know that your A-game is not nearly enough to get you all the way to the top of the podium at a BJJ tournament.

Khabib Nurmagomedov: There are Great Differences Between Dagestan and American Wrestling