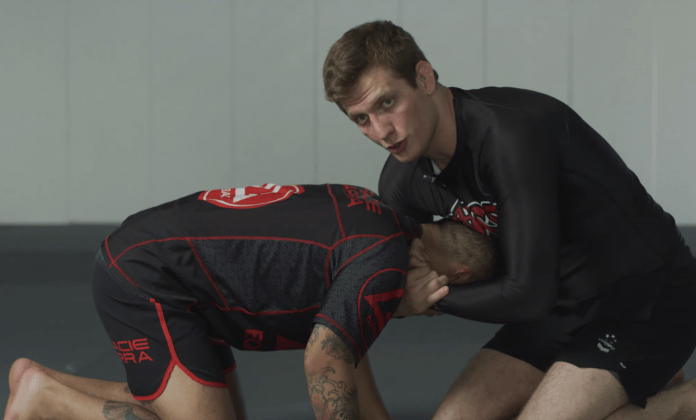 When it comes to innovative BJJ moves, people love working with the latest techniques and moves. And, when it is a world-class grappler demonstrating a new mover, or pulling it off in competition, the interest is even higher. Now, let’s add to that the fact that we’re talking about submission and I’m sure I have your full attention. I’ll raise the stakes even higher. This is a submission that works just a well in the Gi as it does without it. And, fro the finale, it is a sneaky submission, meaning it comes with an incredible rate of success. Are you ready for Keenan Cornelius to reveal all the secrets about the Diesel Squeezel choke? Well, it seems he is, jut a few weeks before he attempts to use it on the biggest stage in the world – The 2019 ADCC Championship.

There’s no doubt that out of all of the creations Keenan Cornelius is so known for, this is one of the best-named ones. Keenan is relentless at innovating, but when it comes to him, we’re used to seeing primarily Gi stuff. Actually, he likes not just GI Jiu-Jitsu but a very specific aspect of it – the guard. So far, we’ve seen a bunch of his innovative lapel guards the likes of the Worm, Squid and the Ringworm guard. In fact, he has a whole Encyclopedia of Lapel guards. However, what many people miss is how great Keenan is at No-Gi. Thankfully, as he is preparing for the ADCC, the grappling world can witness his No-Gi innovations as well. The Diesel Sqwueezel is one of Keenan’s latest creations and is a much better thing to learn than a fancy lapel guard system.

Contents hide
The Jiu-Jitsu Wizard: Keenan Cornelius
The Diesel Squeezel Choke
Diesel Squeezel From The Top
From The Bottom
Standing Setup
In Summary

Keenan Cornelius is one of the most entertaining grapplers of today. If there’s one thing everyone recognized him about, it was all his near misses at the biggest stages of Jiu-Jitsu competition. To be fair, he really was out of luck during the past couple of Worlds Championships. Moreover, he was in the center of controversy, with his bust-up with Andre Galvao and the Atos team a very public affair. Now that it has all subsided, though, Keenan is back to what he does best – Jiu-Jitsu innovations.

As the ADCC approaches, though, Keenan decided to treat us with a really nasty submission that falls under the guillotines category. The Diese Squeezel is a quick and easy guillotine variation that you can set up whenever most things guillotine-related fail. Or, when you’re in a hurry to get a quick and painful tap. In fact, you might know it a punch choke, and you may even have attempted it before. This time, though, Keenan explains all the ins and outs, plus offers several different positions to hunt it from. Granted, until we see him use it in high-level competition everyone should take it with a grain of salt. However, that doesn’t mean we can’t have fun in the gym.

So far Keenan has one No-Gi World title to his name as well as a silver and bronze at the ADCC. The Andre Galvao black belt is certainly one of the best competitors in the world today. However, will his innovations be enough to get him the ADCC title? Having trained with BJ Penn, Lloyd Irvin, Galvao and the Mendes brothers, he certainly has the pedigree. And, If the Diesel Squeezel is anything to go by, he certainly has the arsenal to go with it.

As I mentioned, the Diesel Squeezel is essentially a guillotine choke. In fact, this choke is not of Keenan’s own invention, but rather a product of a wrestler named James Kelly. The choke itself is something of a mixture of a guillotine choke, a loop choke, and an Ezekiel choke. However, it is done No-Gi, and it works better than any of the aforementioned chokes. The choke is extremely powerful because it uses the mechanics from all three chokes. It uses the squeeze of the guillotine, the fist placement of the Ezekiel and the torsion of the loop choke to put pretty much anyone to bed. And the best part is that you do not need long arms to make it work.

With this choke, the secret is in the grip. One arm that goes around the neck just likes for a guillotine choke. However, now you connect your palms in a butterfly grip, rather than the ball in socket or palm to the palm. To be more precise, the arm that goes around, comes on top of the free arm, rather than vice versa in a regular guillotine. To that extent, the choking arm now is the free arm. The goal here is to shove the fist of that arm into the opponent’s carotid.  This is very similar to an Ezekiel choke with the Gi. In all honesty, both arms work for a choke here, but the pressure you feel from the fist is overwhelming.

Let’s use a front headlock as an example. From the position, the goal is to get the arm that goes around as deep as you need to establish the Diese Squeezel grip. Make it a point not to go too far, though. That way, your fist can end up pressing on the back of the neck where you can’t get a choke. The power of the choke is such that you can freely choke from that position. In fact, one of the best things about this submission is that you do not have to go to your back like for a guillotine.

Keenan Cornelius offers two finishing options here. One is to tilt the opponent to the side and finish from a top side control-like position. Another is to actually sit down like for a guillotine and allow the opponent to drive into you fro common guillotine counters. However, they don’t work against this choke. All you need to do is roll on the side their head is pointing for the finish. Choking mechanics include squeezing like a guillotine, pressing like fro an Ezekiel and twisting like for a loop choke.

The bottom position is not something you want to use on a regular basis, but the Diesel Squeezel does open up new opportunities. You could hunt for it from the closed or half guard, and even the butterfly guard. In fact, if you use a leg over form any guard, like for a guillotine, you’ll geta quick and efficient tap. Where I particularly enjoy using the choke though, is bottom side control. Whenever you can get a guillotine-like grip with one hand, you won’t get many reactions from an opponent. As they think they’re safe. However, all you need is that one hand since your other is already close to your chest. A small bridge or hip escape (or both) will help you get the Diese Squeezel grip. From there, you can proceed to roll the opponent over like before and wrap things up quickly.

Rounding things off Keenan Cornelius offers as a standing variation of the choke as well. Since many people like to hunt from the front headlock when standing in No-Gi, this is the perfect opportunity for a setup. Instead of looking for guillotines or Darces, simply put the Diesel Squeezel grip in and you’re good to go. When you have it in, drop to the side of the fist, and do a gator roll. You’ll end up both getting a takedown, earning the top position, and finishing with a quick choke.

The best thing about the Diesel Squeezel choke is that if you have an opponent in it, you can finish them at will. You do not need to wait for them to react. If they, do, you have plenty of options, as we saw earlier. However, if they just sit still, thinking they’re safe, you can actually finish it from everywhere, as long as you get the grips right. Thanks for this one to Keenan Cornelius!

What Makes The Marcelotine Better Than A Regular Guillotine