Conor McGregor is undoubtedly the biggest name in the fight game. While all martial arts have their superstars, Conor transcends the borders of just one art. In all fairness, there’s hardly a person alive that is not aware of who Conor is, regardless if they’re involved in martial arts or not. Not to take anything away from Conor as the super athlete he is, but such stardom doesn’t just happen out of nothing. It takes hard work, enormous dedication, a lot of sacrifices, and most importantly, a solid team behind the athlete. MMA is an unforgiving sport and the people that get fighters ready need to really know their job. The Conor McGregor camp is arguably one of the best possible MMA camps out there. Featuring the likes of John Kavanagh, George Lockhart, and Ido Portal, one would expect nothing less.

To most people that are not in the fight game, the Conor McGregor camp members are nothing more than just names. Even people that just follow martial arts “part-time” might not know much about John Kavanagh or George Lockhart. They’re not as famous in the martial arts world as Mike Dolce or Greg Jackson. Ido Portal is even more of a puzzle. And that’s exactly what Conor wants. He has surrounded himself with people that are more than capable of making him the best fighter in the world (at one time), but who are also somewhat under the radar. Today, we’ll shed some light on the names behind Conor McGregor’s crazy success.

The Conor McGregor camp is definitely one of the best MMA camps put together today. Conor managed to get the best people in the three most important areas for any fight camp. Kavanagh leads the line as the head coach, while Lockhart And Portal follow closely, taking care of nutrition and conditioning, respectively. But who exactly are Conor’s coaches?

The three main areas that any fight camp needs are a head coach, weight management and strength and conditioning. Obviously, the most important out of the three is the head coach, the one who is going to pull all the strings and put the puzzle pieces together. Conor has one of the best in the game in every department. Not only that but each and every one of his top picks is far from your garden variety expert in their respective fields.

Ido Portal is the most unorthodox of them all, specializing in movement rather than weight lifting and/or traditional conditioning methods. Geroge Lockhart is the nutrition guru, the man who got Conor to featherweight with no problems. He has one of the most comprehensive nutrition systems for MMA in the world. John Kavanagh is the lead MMA and BJJ coach at SBG Ireland, Conor’s original base. He is the Notorious’ head coach and the man who makes the balance and comes up with the tactics and strategy. We all know how good Conor is at playing at his strengths. Well, the three people mentioned above are the driving force behind the multiple times UFC world champion.

Let’s start with the mastermind behind the Conor McGregor camp. John Kavanagh is an Irish mixed martial artist who heads Straight Blast Gym Ireland. He has an extensive martial arts experience himself, as well a brilliant coaching mind. 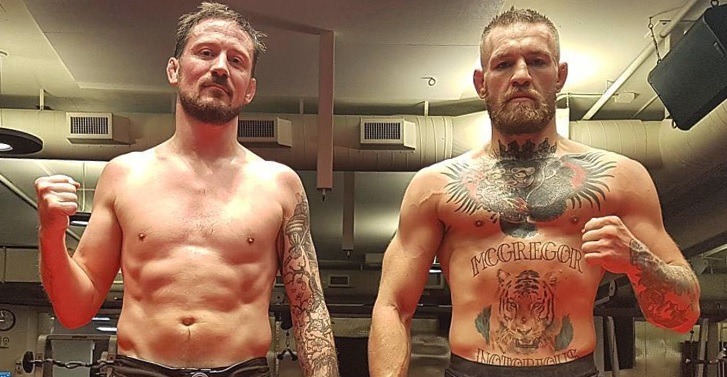 Involved in martial arts from the young age of 5, Kavanagh never really did anything else apart from martial arts. He is the man who brought BJJ to Ireland as far back as 1996. As a grappler, he has plenty of accolades, including fantastic performances at the Euros. In addition to being Ireland’s first BJJ black belt, John is also the first Irishman to compete in MMA. As a coach he is true to the SBG approach of training everyone together, both professional fighters an recreational athletes alike. So far, he has relocated about half a dozen times across Ireland, each time growing his pool of athletes.

Some of the most notable names that John Kavanagh has worked with include BJ Penn, Xande and Saulo Ribeiro, Ryan Hall, Ricardo Liborio and plenty of others. This is before even mentioning the greatest superstar to come out of his gym – Conor McGregor.

Kavanagh is a coach who likes discipline from his students. The first encounter with an overzealous Conor ended up in his body punching the life out of McGregor for acting out. From there on Conor knew he had the best coach in the business. Kavanagh is also a top class fight analyst and puts together great tactical gameplans for his fighters. Even in the Khabib fight, you could see that there was a solid gameplan for Conor to follow.

Apart from a head coach like Kavanagh, there’s nothing more important for a martial artist and fighter than a nutritionist that knows what they’re doing. MMA, BJJ and most high level competitive martial arts all take place in weight divisions. Today’s practice is to get as light as you can so that you can dominate a lower weight class. that means that fighters need to cut weight and perform at the highest level possible. Which is where George Lockhart comes in. 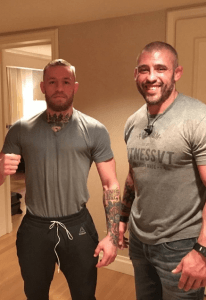 Lockhart is arguably the shrewdest addition to the Conor McGregor camp. He is actually an MMA fighter himself, which is something very few nutritionists can claim. The former Marine actually grew up as an obese kid, which led him towards nutrition and martial arts training. After coaching and helping fighters cut in smaller gyms, Lockhart landed fellow Marine and UFC star Brian Stann. After flawlessly taking Stann down to 185, a flood of UFC fighters came to Lockhart, looking for smooth weight cuts. So far, he has a 100% record with all his fighters making weight.

George is known for his science-based approach to dieting and nutrition. He stays as far away from bro-science as possible and likes to be thorough about his methods. Having worked with 11 UFC world champions so far is a statement on its own about how effective his nutrition system is. After all, he got Conor in perfect health as he won two belts in two different weight classes.

If you’re interested in further exploring George Lockhart’s nutrition and weight cutting secrets, you just need to grab his “Nutrition And Weight Management” bundle. It includes a 3 DVD set outlining all his methods, as well as a 100+ page E-book containing a number of great and easy recipes.

Leave to Conor to choose the best, yet most unusual methods of getting into shape for an MMA fight. The most unorthodox Conor McGregor camp member is Israeli “movement specialist” Ido Portal. Instead of looking at fitness and conditioning from a weight training and running perspective, Ido likes to ta take an alternative route. 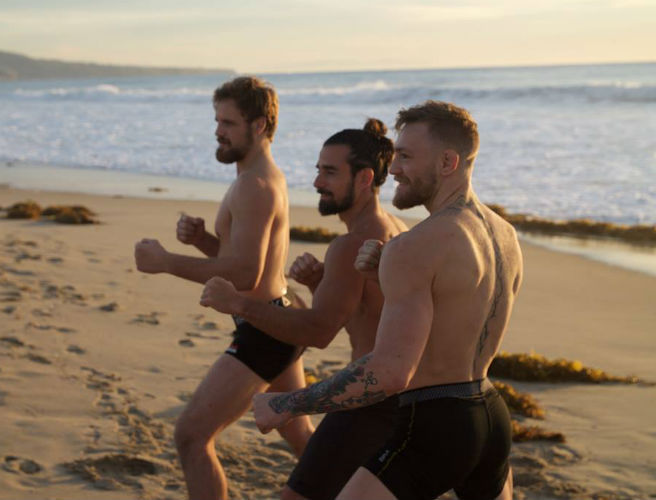 A martial artist himself, Ido trained traditional martial arts before discovering Brazilian Capoeira. This unique martial art led Ido to the realization that movement, as a practice, is not something athletes consider. And there’s no one that needs a maximal range of motion and flawless movement than professional fighters. Ido’s methods include principles and movements from gymnastics, martial arts, dance, acrobatics, and the like. They are all aimed at improving movement, range of motion, reaction time, overall strength and the ability of the body to work as a whole from mechanically inferior positions.

McGregor pioneered the inclusion of such methodology in MMA training. Adding Ido to Lockhart and Kavanagh was certainly a masterstroke by the Irishman. Conor is known for his impeccable timing and movement inside the cage. A lot of it is down to the methods Ido employs in preparing Conor for his fights. Is it unusual? For sure? BUt has it been effective for McGregor? Without a doubt!

Sparring Partners And Other Coaches

Of course, no MMA camp can be complete with just three members. While Kavanagh, Lockhart, and Portal make up the core of the Conor McGregor camp, others are just as important to his success. Some examples include striking coach Owen Roddy and his infamous Jiu-Jitsu coach, Dillon Danis.

McGregor also has a huge array of sparring partners that keep him sharp and at a world-class level. Some of them, like Artem Lobov, are also UFC fighters, while others specialize in different martial arts. Depending on opponents, Conor works with top level wrestlers, grapplers, boxers, etc.