Kurt Osiander is back, everyone, and he is more brutal than ever! Keeping it up might even land him in front of his former teacher Ralph Gracie in terms of brutal moves used. While Ralph’s off the mat behavior seems to be what people recognize him by these days, Kurt keeps on discovering new ways to torture people on the mats. Not that we’d expect anything different from him. This time, Jiu-Jitsu’s favorite rebel provides us with a unique BJJ move that’ll have opponents begging for mercy! Ladies and grapple men, in true Kurt Oisander fashion, we f$&*#@g present the Soul Crusher!

As we all know, Kurt is not one to sugar coat things. This is particularly the reason why he is one of the most entertaining personalities in the sport of Jiu-Jitsu. So much so, in fact, that people usually reference him whenever they come across a particularly brutal BJJ move. Do not get me wrong, Kurt is as legitimate a black belt as they come! He is highly technical and has vast grappling experience. He is, however, one that thrives on cooking people in torturous positions, something that’s no doubt been instilled in him during his years of training under Ralph Gracie. The soul crusher is one such move that will have people screaming underneath you. It has it all – pressure, pin, submission options, transitions, as well as both Gi and No-Gi applications.

Kurt Osiander is an American grappler who holds the rank of second grad black belt in Brazilian Jiu-Jitsu. He has been training grappling for the past 15 years and is a black belt under Carlos Gracie Jr. Up until recently, Kurt was the main coach at Ralph’s academy, but their amicable relationship ended with Kurt getting fired after decades of faithful service. Currently, he has his own academy in San Francisco, along with a huge online presence.

Kurt is known to the grappling community as one of the most brutal people to roll and train with. He has a no-nonsense approach to Jiu-Jitsu, that’s all about tortuous effectiveness. In fact, seeing Kurt training without profanity and loud heavy metal blasting is probably unheard of in all his years as a black belt. And we wouldn’t have it any other way!

Kurt is known as a fierce competitor, having competed at all belt levels. He kept fighting well up until his 40es, which is not strange as he got his balk belt at 37. That was about 16 years ago. He is a 6 time Pan American Champion, and Us Open and Grappling Quest winner, among other accomplishments. He is also the evil mastermind behind some of the most painful BJJ moves ever invented! In fact, one of those moves is exactly what we’ll be looking into today. 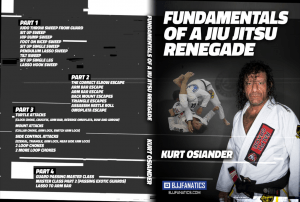 Check out Kurt’s “Fundamentals Of A Jiu-Jitsu Renegade” DVD set. It is one of a kind BJJ instructional that’ll teach you the essential basics of BJJ in a Kurt Osiander way! Across four packed volumes you can expect to learn brutal guard passes, slick escapes, great sweeps and much much more!

The soul crusher is a BJJ move that you se up from side control. It is something in between a pin, a pressure position, and a submission. Actually, it is all three at once and can lead to each of them separately with only slight adjustments. A true Kurt Osiander classic.

Now, before we get into it, you need to know that this move requires some previous grappling knowledge. You need to be comfortable at switching side control sides and transitioning into and out of North-South. That said, this BJJ move will all but guarantee nobody ever escapes your sie control again.

The Soul Crusher, which is basically a side control straight jacket, starts with one arm over the opponent’s head, and the other on their hips near you. From there, you need to be comfortable applying pressure and moving to either side. In this instance, you’ll head to North-South. The goal here is to trap both arms with your elbows in the opponent’s armpits. You then proceed to isolate one arm by pulling it towards your body and eventually go into side control on the opposite side than the one you started from. The whole way you use your ribs to keep your opponent under pressure.

Once you settle into side control again, you end up with the opponent’s far side arm across their chest and under your control. Use a triceps grip to keep their other arm in place. Now, the opponent can’t move in either direction. Make sure you introduce forward pressure and start “cooking” your opponent. Welcome to the Soul Crusher!

How To Use The Soul Crusher

Now that you’re all set up in the Soul Crusher BJJ move, what’s your next step? Well, you have several. Let’s assume that you want to keep being brutal and want to submit your opponent in the most Kurt Osiander way possible. Then, you head to the paper cutter choke. All it takes is to release the triceps grip and grab the back of the collar instead. Now, you do the ultimate BJJ mind trick-let your opponent get their trapped arm out. As they sigh in relief, grab the lapel with your top arm and sink in one of the deepest lapel chokes in existence!

Another option to be particularly brutal is to take the paper cutter choke to the very next level. Instead of using your forearm to apply pressure, this time you’ll use your knee to press on the opponent’s carotid artery on one side. The first part is the same, release the triceps and grab the back of the collar. As you release their arm, this time use your top arm to wrap their head around. Grab the back of the collar with it as well, pick your butt up and place one knee directly on their carotid. Straighten your arms and press down with all your weight!

The final option is a catch-wrestling move that’ll have people genuinely afraid of you. Namely, you’ll stay in the Soul Crusher and look to get the arm under the head as deep as possible, For this, you might want to switch your legs to Kesa Gatame for a bit. In order to sink in a choke, get your hips close to the opponent’s and establish a figure four grip with your arms. To finish, simply hug and sprawl!

Well, there you have it, a BJJ move straight out of Kurt’s brutality bag! The Soul Crusher will improve your side control, will make your pressure game much more precise and it’ll open up different avenues of attack! Remember that you’re not limited to the submission options above, and you should experiment with neck cranks, armbars, leglocks and everything else you can think of! Now, as Kurt Osiander would put it, “shut up and train”!

The Paper Cutter BJJ Choke For Gi And No-Gi