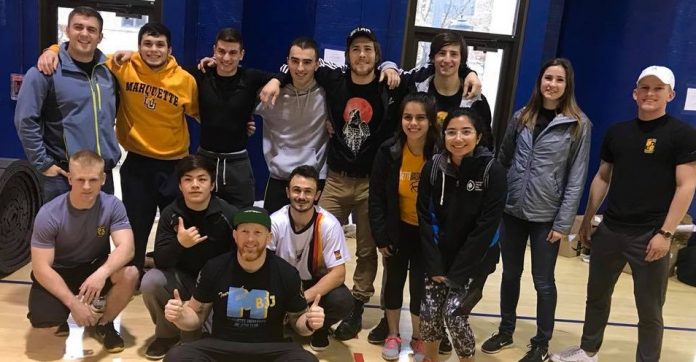 When I was an undergraduate at the University of Northern Iowa, I started a judo club after taking a single physical education credit in the art. We were lucky to find a competent coach and work out regularly, keeping the club going for the duration of my time at the school. In the many years (don’t worry about the exact number) since I was an undergrad, the popularity of grappling arts, spurred by the meteoric rise of MMA, has flourished.  For Chris Martin, founder and executive producer of BJJ 4 Change, that popularity presented a daunting but exciting possibility that would not have been remotely possible in 2003; a collegiate jiu-jitsu tournament league.

In addition to running his own gym, Nova Gyms in Wisconsin, Martin is also the head coach of the BJJ Program at Marquette University, his alma mater. Martin has reached out to coaches at other universities with the hope of creating a league of schools that could compete regularly as a club sport, under a unified set of rules. He believes that regular collegiate competition will not only raise awareness of the sport and provide an additional competitive opportunity for its students but will also benefit from unifying rules as a step toward increased legitimacy for IOC consideration. He has spoken with Matt Leighton, head coach of the University of Iowa’s jiu-jitsu club, as well as Mark Hamel, president of a club at the University of Oregon, and Roger DeCampo, who coaches at Texas Tech.

The idea of proliferating jiu-jitsu through established channels such as those that promote wrestling and even other mainstream sports like the track isn’t a new one. Dana White has notably expressed his belief that Jiu Jitsu would one day be a collegiate and an Olympic sport. Last year, the JJIF began preparations to submit a proposal to add jiu-jitsu to the Olympics. Martin, however, is focused on building the sport on a collegiate level and has paired with a number of coaches and organizations to document each tournament. Through this process, Martin hopes to introduce jiu-jitsu to a wider audience in much the same way as organizations like FloSports, whose FloGrappling promotions have grown in popularity in recent years.  Martin plans to go after sponsorships and other sources of funding as well. “Personally, I believe that recruiting is huge; plus, if wrestling is a money sport that brands spend money at, then why not BJJ?” he says.

The main obstacles inherent in a college program, shared by all coaches interviewed, include limited training time, lack of experienced students as well as less availability of high-level coaches for collegiate club programs (many are run by purple, blue or even white belts), as well as the struggle of fitting jiu-jitsu commitments in between academic responsibilities. However, the more organized, structured, and prolific jiu-jitsu becomes on college campuses, the more likely it is that these problems may solve themselves through higher student engagement and cohesion from year to year. Programs that become established could easily retain dedicated students for at least 3-4 years, and as the age that students begin training grows younger, it would not be unreasonable for people entering a jiu-jitsu club to have attained blue or even purple belt. Coach del Campo adds that some of his current students are alumni who have continued to train despite finishing their studies at the school. A more challenging puzzle to solve is the notion of constantly rotating leadership. Marquette is lucky to have Mr. Martin, an alumnus who coaches consistently, whereas other schools may stand to lose their leadership as they move on from their schooling.

One particular ruleset proved most popular with the coaches interviewed. Though not unanimous, the EBI-style submission only ruleset was a heavy favorite. Each coach listed individual preferences with respect to knee reaping, lower body submissions, etc. which presents another significant barrier to uniform club participation: competition rules. Even within the sub-only format, there was no clear consensus on submissions or issues such as guard pulling and the infamous butt-scoot. Clearly, this is something that must be clearly defined before a collegiate league is established.

Regardless of the barriers inherent in putting together such an ambitious venture, the result if successful would be a potentially nation-wide effort to promote the art of jiu-jitsu, an art that most StumbleUpon rather than seek out. It could lead to sponsorship programs, recruiting, and would certainly increase the profile of those non-collegiate jiu-jitsu programs as well. The benefit to the jiu-jitsu community is incalculable.

Martin plans further school-versus-school events in the future. If you would like to be considered for participation in this league, please contact him directly at [email protected]