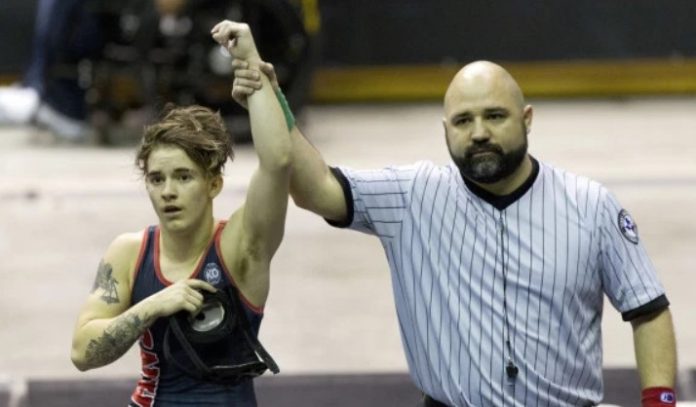 Cypress, Texas – For the second year in a row, the transgender wrestler is winning girls’ state championship in a Class 6A 110-pounds Division

Mack Beggs is an 18-year-old transgender from Euless Trinity High School in Dallas. Mack is currently being undefeated in wrestling. In a final match on Saturday, he wins the title beating Chelsea Sanchez

Mack Beggs is currently in the process of transition from Female to Male using low doses of testosterone. That’s exactly that forced a debate about competitive fairness and transgender rights last season. Unfortunately for Mack, he was almost stopped last year by the last-minute lawsuit.

On his way to the title this year, he had three girls to beat and now he’s holding a record of 35-0.

Mack Beggs mother, Angela McNew, said: “He has so much respect for all the girls he wrestles.  “People think Mack has been beating up on girls … The girls he wrestles with, they are tough. It has more to do with skill and discipline than strength.”

Beggs Mother, Angela McNew is not allowing his son to give any interviews or any statement for the media. She wants her son to concentrate on competition and tasks ahead of him. She also said that she’s trying to protect him from all negative comments and insults on social media and even insults on wrestling mats.

She also adds that Mack wants to compete in the boy’s division, but Texas High school rules would not allow him.
Also, last year he had two forfeit victories because one girl refused to fight him even though her coaches and teammates insisted the girls to fight Beggs.
Check out the video below and this dramatic finish and tell us do you think that strength coming from doses of testosterone or it’s based on Mack’s skill?

WATCH: in a dramatic finish, transgender wrestler Mack Beggs rolls out of a possible pinfall to avoid defeat and win state. Met with boos from the crowd. @wfaa pic.twitter.com/72xRpzsQGN

What do you think? Are we becoming too politically correct?