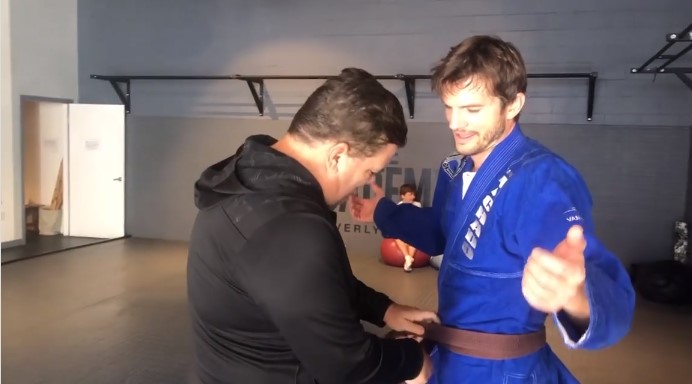 Hollywood Star Ashton Kutcher is now a Brown Belt. He was promoted by his Professor, Coral Belt, Rigan Machado.

Bobby Razzak posted a Video of Ashton Kutcher receiving his Brown Belt by Rigan even after he protested. The main reason Ashton protested is that he wanted to get himself in shape before being promoted. He stated that he needs two-three weeks to get in shape first.

Back in 2014, Ashton was criticized by the Brazilian Jiu-Jitsu community for receiving his Purple belt “so fast”. However, Ashton’s professor Rigan gave an interview for TMZ about the situation. He stated that he’s shocked by Ashton’s knowledge of wrestling and that he took a lot of private lessons with him.

In a case you didn’t know, Ashton was wrestling throughout his whole childhood and that’s probably where his love for grappling martial arts came from.

As Ashton stated multiple times his story with Jiu-Jitsu which turned into great passion started when he was traveling to Rio De Janeiro, Brazil. At first, he just tried Jiu-Jitsu to stay in shape and that led him to Ricardo De La Riva’s Academy which he visited many times after that.

Congrats to my bro today ?? and my Master the legendary Rigan Machado the ?#ashtonkutcher #bjj @aplusk