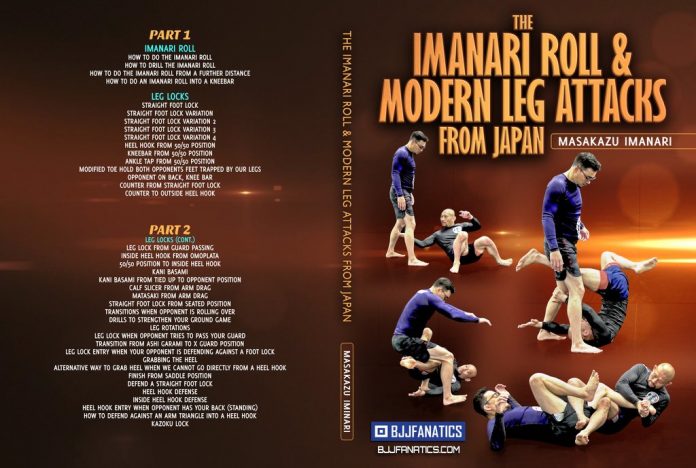 Masakazu Imanari. What do you think of when you read or hear that name? I immediately picture a white canvas, ring ropes and someone’s screaming in pain as their legs are bent in all kinds of unnatural directions. And at the end of it is a small Japanese man, moving around like a cat possessed by a demon. Well, that little Japanese heel hooking wizard, and the man behind one of the most attractive moves in grappling history, now has his own dedicated leg locking DVD instructional. The theme of the DVD is The Imanari Roll and Modern leg Attacks – exactly what the doctor ordered.

The Imanari roll is one of the craziest looking, and actually not really complicated moves you can do in BJJ. And by do, I mean that with all the knowledge we have of leg locks now, I mean that even white belts can use it safely under IBJJF rules to get a sweep or an Ashi Garami. That said, who better to learn the move from than the man who invented it, Masakazu Imanari? “Ashinkan Judan”, as he is known, shares a lot of crazy tips and tricks about his infamous roll that every leg locking enthusiast out there is going to go crazy for! You can’t miss this one!

Masakazu Imanari is a 44-year-old MMA fighter from Japan that is legendary for his use of leg locks. That said, Imanari is still an active fighter, with one of his signature leg locking victories coming in just 53 seconds of a match against Kwon Won Li in ONE FC that took place in 2019. 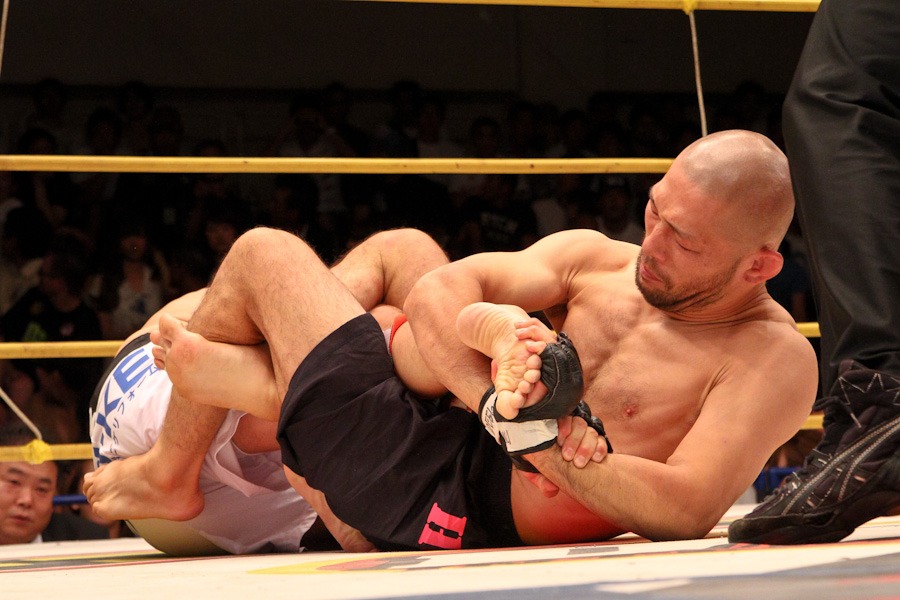 With 56 pro MMA fights to his name and a record of 38-18, Imanari has a staggering 27 submission victories in different MMA organizations. He fought under the banner of DREAM, Titan FC, ONE FC, Deep, Pride, and a bunch of others. A staggering 17  of 27 those submission victories have come via a leg lock, something Masakazu Imanari became notorious for from his earliest fighting days. Simply put, there’s no better leg locker in the history of MMA than Masakazu Imanari. Moreover, you’ll hardly find a more efficient and attractive leg lock setups than the Imanari Roll.

Imanari is a big fan of the 50/50, something that is the signature of old school leg lockers. As Lachlan Giles proved lately, and Ryan Hall is constantly demonstrating, the 50/50 is still one of the best positions to hunt for leg locks.

In essence, the Imanari roll is a Granby roll that takes you from facing your opponent, t an inverted position, and back facing them. The trick is that in the process, you shorten the distance, and get a tight Ashi Grami, or leg entanglement on one of their legs. Whether you go to the 50/50 or into different positions for attacking, can be down to you. Masakazu Imanari himself likes hitting the 50/50 position from there. That said, in modern grappling, the move works great as a sweep as well as an entry into leg locks. All modern leg lockers, including the Danaher Death Squad guys, use this move to set up some of the deadliest heel hooks attacks in existence, And now the master of roll himself decided to share all secrets regarding his trademark move in The Imanari Roll And Modern Leg Attacks BJJ DVD.

The Imanari Roll And Modern Leg Attacks DVD instructional by Masakazu Imanari is a two-part instructional. It contains a real wealth of knowledge regarding leg locks and covers several different positions that are highly useful for setting up leg locks, and particularly heel hooks, in modern grappling. Furthermore, he covers different submissions, from ankle locks and toe holds, to kneebars and his deadly heel hooks. While this is a NO-Gi instructional, all setups work just as well in the Gi, and apart from heel hooks, are obviously legal to use under any ruleset.

There are two parts to this DVD, with the first volume focusing mostly on the Imanari Roll and 50/50 leg locks that include all four types of submission holds. The second volume is Imanari putting them to use by demonstrating how you can set them all up from a variety of positions and across 23 chapters. As I said, this one is a real treasure chest for all leg lockers out there.

Opening up the instructional is a dedicated portion of the Imanari roll. In several chapters, Masakazu Imanari covers the basics of executing the roll, pointing out things that only somebody doing it as long as he has can figure out. Moreover, he has a very cool set of drills that are different from anything you might be doing to improve your Imanari roll at the moment.

The part I particularly enjoyed was covering distance with the roll. Imanari demonstrates how you can get the roll to work even if you’re quite far from your opponent. In that sense, the roll becomes a tool for both shortening the distance and entering into leg locks. Speaking of leg locks, the kneebar entry off the Imanari roll is pure gold.

About halfway through the first volume, Masakazu Imanari switches over more specific leg locks details. With the Imanari roll as an entry, he demonstrates what to do after you obtain the 50/50. He shared 5 straight foot lock variations, to begin with, and some of them have been tested against top names in the MMA world. And proven effective, of course. Speaking of the 50/50, kneebars and hell hooks follow the foot locks. There’s also a weird toe hold setup where you have both legs completely tied up.

A kneebar when someone has your back is a classic Imanari thing and marks his transition into counters. Heel hook and foot lock counters wrap the first volume up.

That is an understatement if ever there was one. This DVD contains leg locks, leg locks, and more leg locks. IN this volume, the focus is on getting to all the different leg locks Masakazu Imanari previously demonstrated.

HE shares entries form passing the guard, from an Omoplata, flying scissor takedowns, from the bottom, from arm drags… basically Imanari has a leg lock setup from every possible BJJ position. The real value, though, is in some signature setups like the calf slicer and Matasaki off arm drags that are really worth your time.

Apart from entries, Imanri also goes over some transitions and drills that will help you understand and master all his leg lock setups and combinations. True to the title of Modern Leg Attacks, Imanari doesn’t just leave it at the Imanari roll and 50/50. He also covers popular positions like the saddle, different heel hook variations as well as different heel hook grips. He even shares heel hook defense concepts that are completely different from anything we’ve seen so far.

One thing that really stands out (and seems legit) is the arm triangle escape that leads into a heel hook. Oh, and there’s the Kazoku lock too. Pure brilliance.

It is beyond a doubt that Masakazu Imanari was well ahead of his time with the leg lock game. He was just too focused on MMA to eve really shine in the grappling world. His decades-long pursuit of excellence in lower limb submissions though makes hi ma human encyclopedia on the subject. And now, that encyclopedia has just had its first complete edition, in the form of the Imanari roll and Modern leg Attacks DVD.