What is the side of BJJ that you really enjoy? If you ask me, it has to be the deception. Higher-level Jiu-Jitsu is always about dangling something in front of an opponent and then doing something completely else. In Fact, the ultimate Jedi mind trick is dangling something and actually performing it without much, or any resistance. To be honest, there are not that many positions that will allow you to do this. Well, at least not before you reach a coral belt level. However, the Lasso guard is one that might work in this fashion even for people that are not highly advanced. The Complete Lasso Game Plan DVD is a masterful instructional by Tarsis Humphreys that will provide you with the best arsenal of deceptive attacking moves.

Right off the bat, I’m going to make it clear – thiasi s a DVD for competitors. Yes, you can have it as a recreational grappler, and use it all the time. It will work, and it will work against pretty much everyone. That is the point. Those, however, that make competing for their focus, absolutely need to have the Lass guard as part of their gameplan. IN fact, what Tarsis Humphreys demonstrates is the most well-rounded competition game plan based on the leg lasso position. The Lasso ComplteGaem Plan DVD is going to teach you not only how to use the lasso guard, but also several innovative positions that have made Humphreys a real force to be reckoned with.

Who Is Tarsis Humphreys?

If you haven’t heard of Tarsis Humphreys it is not because he is a new, up and coming grappler. Quite the contrary. He is one of the pioneers of competitive JIu-Jitsu and has been around for quite a while. In fact, he got his black belt from Fabio Gurgel in 2006, which gives him well over a decade’s worth of competition experience. You could go as far as saying that he is the most “old-school” of the new school Jiu-Jitsu players.

Tarsis Humphreys was born in Sao Paolo and started BJJ as a 13-year-old under FamioGurgel. One of the most interesting things about Tarsis Humphreys is that he went through all the belt ranks under Fabio Gurgel, eventually earning his black belt. Moreover, he has been a loyal Alliance representative for his entire career. In fact, it is a competition success that rally marks Tarsis’ career. Grappling at 88kg / 194lbs he won the Pans, Brazilian Nationals, and Worlds as a brown belt,m and did it all over again, adding the Europeans as a black belt. One of his most significant accomplishments has to be winning the very first World Professional Jiu-Jitsu cup, AKA the Abu Dhabi World pro.

Another really significant trait of Taarsis’ game is that you can’t really find a hole in his gameplan. He is an extremely well-rounded grappler who is capable of scoring or submitting from literally anywhere. However, he does favor position that allows him plenty of attacks based on deception and leverage. OF course, the perfect example is the leg lasso guard, so no wonder his latest DVD instructional is one on the Lasso Complete game Plan.

Hopefully, there’s no need to mention that he is a Gi only instructional. That much should be apparent from the subject of the Lasso Complete Game Plan DVD by Tarsis Humphreys. This Instructional is truly masterful, and most of it is down to the vast experience Tarsis Humphreys has as a competitor. He knows perfectly well how to use the unbeatable old-school principles and blend them with new school concepts for the ultimate weapon. IN fact, this instructional is just that – a laser-guided weapon that’ll help you score over everyone. That said, and even though submissions feature, this is not a submission hunting DVD. On the contrary, it contains the best ways to win a sports Jiu-Jitsu match with the help of the Leg lasso guard.

The Lasso Complete Game Plan instructional is divided into clear sections. It contains just over 20 chapters that focus on the use of the lasso guard. What is really eye-catching about this instructional is the first section, which happens to be the longest one. Across 9 chapters, Tarsis Humphreys explains his take on the Deep X guard. This open guard variation is clearly designed primarily for tournaments. Going further, Humphreys looks into the turtle position and how you can use it to attack with the lasso. A Lasso De La Riva follows, offering even more attacks. Wrapping the Lasso Complet game Plan DVD up is a portion on troubleshooting, which contains several common Q and A situations.

What is the deep X guard? Well, the name says it all, rally. It is a unique hybrid of three guards: the X guard, the deep half guard, and the lasso guard. Yeah, I know, if someone told me to combine them all I’d say it is impossible. But that was before I came across the Tarsis Humphreys Lasso Complete Game Plan DVD instructional. Before the Deep X guard section, though, there’s an introductory portion that covers the shoulder drag sweep.

In terms of the DEEP X guard, where do I start? The opening few attacks are nothing new, featuring shoulder rolls, and Tomoe Nage variations. However, the position itself is far from the regular lasso guard, meaning each of these attacks is virtually risk-free. Moreover, there are four different Tomoe Nage variations to choose from, a couple of which leading directly to passes. Further options include back takes, and this is where things get interesting. Apart from various ways of getting the back, there’s also a quick and easy calf slicer setup. Moreover, there’s even a back take that ends up in a calf slicer. As I said, the ultimate Jedi mind trick collection.

The turtle position doesn’t get much attention here. The reason for that is that you won’t end up there if you’re using the Lass Complete Game Plan. However, if you do end up in turtle, Tarsis Humphreys doesn’t really offer much in terms of staying there. Instead, he outlines several ways in which you can burst out, attacking as you go. Options include rolling out, and sweeping as you do until you end up in the leg drag pass. Or, if you’re all about the finish, rolling through to a powerful kneebar.

The second-largest portion on this DVD covers a guard many people try to play often. Those having limited success with it probably never had the pleasure of learning the secret details from Tarsis Humphreys. I count myself among these unlucky people. Luckily, that’s all changed now. The Lasso De La Riva portion has half a dozen techniques that tie with one another in a neat little system. Just like expected, most of the attacks here area sweeps, given the positioning of your body. However, Tarsis Humphreys doesn’t like to stop at just sweeps.

All of his sweeping options, from the sit-up sweep all the way to the side and tilt sweeps offer subsequent attacks. It may be a knee cut pass, a way to obtain the mount or a direct submission like an armbar. The trick with each is to keep on going and scoring until you get a win, one way or another. And, just to balance things out, there’s also a Kimura sweep to an armbar so that you get a direct submission.

Finally, a few more chapters round off this incredible Tarsis Humphreys Lasso Complete Game Plan DVD. First up you get a few great options to sweep whenever an opponent decides to stand. However, the real gems in this portion come in the form of a couple of highly effective and attractive sweeps. One is the pinning overhead sweep and the other is the knock over the sweep. Personally, I prefer the latter simply because it ends up in an unstoppable footlock finish.

If you are serious about competing in Gi Jiu-Jitsu than this instructional should be your starting point. IN fact, think of the Lasso Complete Game Plan DVD like your Hail Mary. Learning the things Tarsis Humphreys demonstrates in his instructional will give you the security to try and do whatever you want. That way, you always know you have reliable options to fall back upon should you need them. 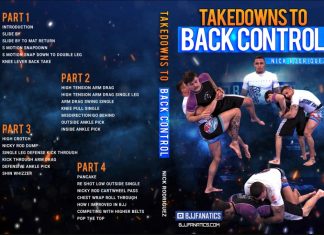 BJJ World - 0
There's, not one grappler alive that doesn’t know the name, Nick Rodriguez. It wasn’t the same a year ago. In fact, a couple of...