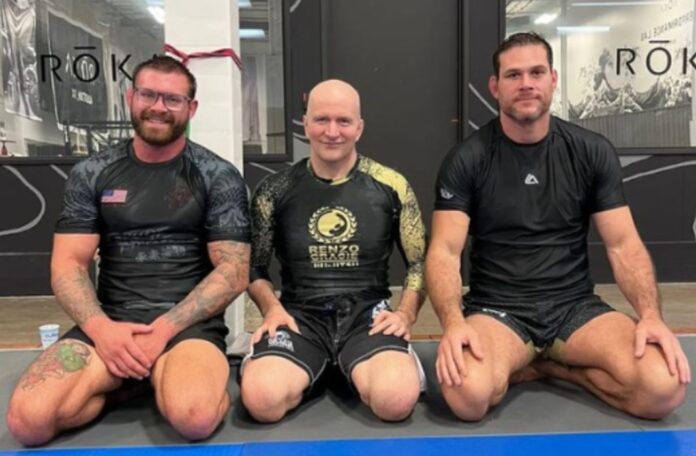 Roger Gracie and Gordon Ryan are two of the most accomplished grapplers in the BJJ world, and there have been many “what ifs” regarding a possible matchup. While that is most likely out of the question, given that Roger retired, a joined training session is the next best thing, and one just happened!

Imagine you walk into a gym and you see Roger Gracie and Gordon Ryan rolling, with John Danaherobserving / coaching the roll. Until a couple of days ago, this may have been a fantasy but is now a reality, after the three met up for a joint training session at NE Wave Jiu-Jitsu.

According to Gordon, this was a dream come true for him:

“This was a bucket list item of mine. I’ve been waiting years to share the mats with the GOAT of GOATS. After a few rolls it is VERY clear as to why Roger Gracie was as dominant as he was. I’ve spoken in interviews saying Roger was roughly 20 years ahead of the pack technically from 2004-2010 ish. After rolling with him today I can say with certainty he is still far ahead compared to the guys I compete against on a technical level. It was such an honor to have him on the mats with us this week.”

John Danaher, who has met Roger Gracie on previous occasions after working at Renzo’s gym for so long, added:

“The best two grapplers I ever saw: We had the privilege of hosting the great Roger Gracie at the gym today. Roger was by far the greatest Jiu Jitsu athlete of his generation and the greatest all round Jiu jitsu player of all time. He has always been a source of tremendous inspiration both to the jiu jitsu world at large and me and my students.

Roger and I met many years ago in NYC and I have have always coached according to the ideal that he set of ruthlessly hunting for submission victory above all else. It was amazing to see him training once again with my students as he did so many times back in NYC. His game still looks incredible!! Roger is in Austin doing a podcast with Lex Friedman I will write more tomorrow about this podcast – I spoke to Lex today and it sounds awesome! Stay tuned for more on Rogers thoughts on Jiu jitsu!”

Roger Gracie is a 12x World Champion and 2x ADCC champion. Gordon, on the other hand, won the ADCC in 2019, previously winning his category, and of course, making history at the latest 2022 edition of the sport, on top of beating the who is who of Jiu-Jitsu in various super fights.