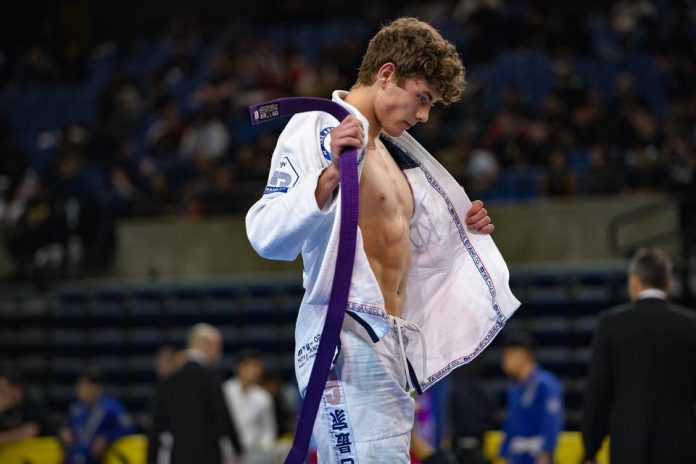 Contents hide
Becoming a world champion is a dream of almost everyone who signs up for BJJ class. Most people never even end up competing, while those that do rarely reach this goal. There are even fewer that truly stay on the pat despite having all it takes. Imagine the pleasure of not only winning your weight class, but also the absolute. Now imagine achieving that at purple belt while you’re not even 18 years old. That’s exactly what young Roberto Jimenez BJJ Purple Belt pulled off at the 2018 IBJJF World Championship.
Who Is Roberto Jimenez
The 2018 Worlds Purple Belt Emperor
Earlier Accolades
You Might Be Interested In Reading:

Becoming a world champion is a dream of almost everyone who signs up for BJJ class. Most people never even end up competing, while those that do rarely reach this goal. There are even fewer that truly stay on the pat despite having all it takes. Imagine the pleasure of not only winning your weight class, but also the absolute. Now imagine achieving that at purple belt while you’re not even 18 years old. That’s exactly what young Roberto Jimenez BJJ Purple Belt pulled off at the 2018 IBJJF World Championship.

Roberto Jimenez is the embodiment of most people’s Jiu-Jitsu dreams. he is a very young athlete that has a bright grappling future in front of him. Even though he is still a teenager, he is not unknown to the BJJ community. He already has very high accomplishments even as a blue belt. Now, as a purple belt, Roberto Jimenez got the highest honor available in the BJJ sphere. he is a double gold purple belt world champion. It can hardly get any better than that. Well, for now, at least, since he still has a lot to offer the grappling martial arts world in many years to come.

Who Is Roberto Jimenez

Roberto Jimenez is a BJJ Purple Belt training at Alliance Team Gaucho in Texas. He is a true Brazilian Jiu-Jitsu warrior. The young grappler is humble, respectful and as fearsome a competitor as they come.

The now teenager has been involved in Brazilian Jiu-JItsu since the age of 5. He went through all the kids BJJ belts before earning his blue belt. Precisely at the blue belt he became known to the BJJ community through some incredible grappling feats.

As far as he remembers, some of his earliest BJJ memories are not pleasant. Enrolled in the class by his father, young Jimenez used to hide in the bathroom not wanting to train. After overcoming his initial resistance he started training up to three times a day. And this is in addition to his daily school chores.

What stands out with Roberto Jimenez apart from his immense technical abilities, is his amazing attitude. He is truly the embodiment of the “leave your ego at home” philosophy. His father Raul Jimenez is also his teacher, meaning he expects more out of his son than any other student. And Roberto isn’t one to disappoint. This relationship has molded Jimenez in the world champion he is today.

As the 2018 IBJJF World Championship is in full swing, one grappler’s success cast a shadow even on the much-anticipated black belt matches. Not at all surprising, but also no less impressive, Roberto Jimenez managed to become a world champion. Actually, he managed to get the world title twice. At purple belt. As a teenager! 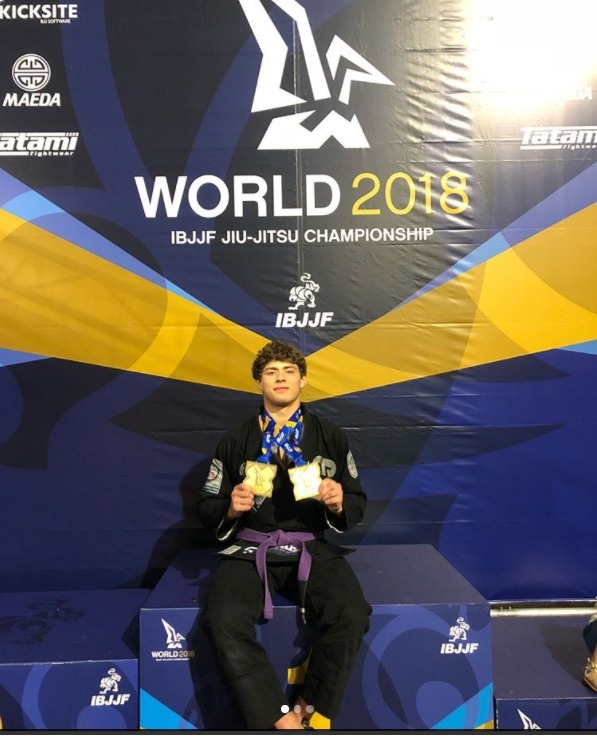 Alliance Spring’s Roberto Francisco Jimenez is the 2018 purple belt heavyweight and absolute world champion. He not only beat every opponent in his path but did so in an incredible fashion. The purple belt teenage sensation initially won six matches to claim the title in his weight division. Later on, he impressed once again by beating five more opponents to become teh undisputed 2018 purple belt world champion! The most impressive thing about his victory is that he beat all 10 of his opponent’s by submission! Yup, he never even saw one match go the distance.

The two sternest tests of Jimenez’s abilities came in the semifinal and the final match. First, Jimenez got back from a 9 point deficit to be Pedro Alex with a lapel choke. In the final, he squared up with MMA fighter Mason Fowler. Not surprising, the final didn’t last long. Jimenez got on Fowler’s back in no time and sunk in another lapel choke. Despite Mason’s brave attempts to escape, Jiminez got the bow and arrow finish.

Jimenez later wrote the following statement on his Instagram Profile: “I’m speechless right now as a dream of mine just became reality. I will make a post tomorrow explaining my joy and gratitude to everyone who has helped me so much and my emotions but right now all I can say is… 2018 DOUBLE GOLD WORLD CHAMPION ??? 10 FIGHTS 10 SUBMISSIONS”

The Latest Message from Roberto Jimenez:

“I’m 2018 worlds heavyweight and absolute champion. I had 10 fights total and finished all of my opponents. I’m beyond happy with my performance but the work continues. This is a moment I’ve literally fantasized about and it feels amazing to see hard work pay off. I want to thank everyone who has helped me and believed in me. All my friends and teammates from Vegas and Charlotte and all of you always pushed me. I want to give special thanks to @lucaslepriand @kinephys they both made a big impact in my game, confidence, and all around helped me grow as an athlete and human being. Also, huge thanks to my family who’s always there supporting me and by my side no matter what, they have raised me the best way possible with respect, modesty, and much love… love you.❤ Huge thanks to my sponsors who always believe in me and help me throughout my career. ECUADOR HAS TALENT.”

Just last year Roberto Jimenez was in the spotlight again, this time as a blue belt. He is famous for managing to finish not one, but two black belts even before he got his purple belt. At Fight To Win Europa in 2016, he battled Lucas Pinheiro of (Gracie Team Plano).

Roberto Jimenez had just recently turned 16. Yet he already had a double gold victory at the Pan Ams to boast with. He ended up grappling with a black belt because he was in the Advanced No-Gi Division. Actually, the only reason Roberto was not yet a purple belt was age. The IBJJF age requirements state that he was too young at the time to be anything but a blue belt. That didn’t stop young Jimenez from dominating an older black belt, though.

One thing is for sure though. Roberto Jiminez is a rising start that is going to provide much more entertaining matches at the highest levels of Jiu-Jitsu. He is a very driven and determined young grappler who is going to be downright scary for anyone to face in a few years time.  Remember where you read his name first and follow Roberto Jimenez as he lives the BJJ dream!

Day Two of the IBJJF World Championships was filled with wild upsets, crazy submissions and a new king of the purple belts. Catch all the highlights in the VLOG!

Posted by FloGrappling on Saturday, June 2, 2018