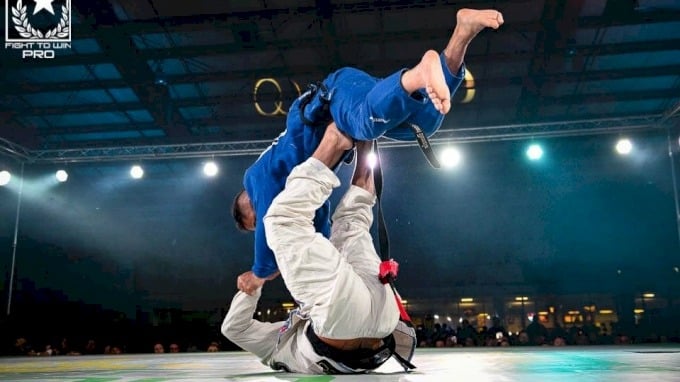 What is your favorite armbar setup? The armbar is a very versatile submission that you could set up from a bunch of BJJ positions. However, in most cases, it boils down to either going for top or bottom position armbar (except in the case of standing flying armbar setups). That said, top position armbars are a bit more secure and more reliable than bottom position ones, regardless of specific positioning. The Helicopter armbar is a setup from the bottom that allows you to end up in a top position armbar. In other words, the best of both worlds. Plus, it looks beyond cool!

One thing about spinning and rolling submission setups is that people often shy away from them. Sure, they’re fun in the gym when you’re rolling with lower belts, but doing it in a competition is usually out of the question. The helicopter armbar, though, is an exception. Not that you should sweat trying any move out in a match. With the Helicopter armbar, all the spinning comes at the cost of the opponent, instead of you. Throughout the motion, you’re in a very stable position and ready to use whatever follow-ups you might like form any guard you like. Win-win, right?

The Issue With Finishing Armbars From The Bottom

Before I get into the nitty-gritty of the Helicopter armbar, let me talk down the bottom position armbar for a little while. It’s not that I don’t like it, I just think it’s way less reliable than any top position armbar. There are plenty of reasons for this, but the main one is the most obvious one – gravity.

When you find yourself in a top position, the bottom person has nowhere to go – there’s a planet behind them. When the rolls are reversed, though, and you’re on the bottom, you’re’ the one that’s stuck. Moreover, the opponent can pull backward out of just about anything you throw at them off of your back. That’s why the guard is awesome as a defensive position that can help you achieve top position. It is not, however, a point-scoring position because it does not offer the same advantages that top positions do.

In the case of the armbar, going for an armbar variation from guard means an opponent can always pull back with their entire body. It may be very late into an armbar, but there’s a gap there you can’t close. Moreover, coming back to gravity, if opponents pick you up, your body tends to want to come back to the ground. That equals slipping down on the arm and losing the armbar.

These are just a few examples of how the bottom position impacts your armbar finishing rate. Of course, sweeping, getting on top, and then getting an armbar is a surefire way of solving this. Or, you could go for the Helicopter armbar and solve it all in just one move.

The Helicopter armbar is a setup from the bottom that can be executed from most guard positions, open or closed. The goal is to make your opponent act like the blade of a helicopter, literally. This completely changes the dynamics of the bottom and top situations, as now you have gravity working for you, rather than against you.

Let’s look at a closed guard setup, to begin with. You start off with the arm high on your chest, and a solid grip on either the sleeve or the forearm. The other arm holds the collar or the opposite side sleeve. The moment the opponent stands up to execute a standing opening, you open your guard and place both feet on the hips. This is where the most important part of the Helicopter armbar happens – the lift. Your goal is to extend your legs completely, while having your opponent balance on them, like a rag thrown over a wire. Remember never to push with the feet, but rather place them at the hips and pull the opponent towards you, before lifting directly upwards.

For the armbar itself, you want to remove one leg out of the hip crease. That is the leg which is on the same side as the arm your attacking. This way, you create an opening for your opponent to fall into. If you’ve kept a tight grip on the arm, they’ll fall straight down on their back, deep into an armbar. The finish is as you usually finish an armbar from the top.

Another option to set the Helicopter armbar up would be the De la Riva guard. The only difference to the closed guard setup is that you keep the leg with the De La Riva Hook in place. The lift here happens with one foot on the hip and one behind the knee. Everything else is the same – you need to isolate and really grip an arm, pull towards, you, and lift. This time though, removing the De La Riva hook will get you a much faster and more intense drop into an armbar.

The helicopter armbar has two crucial moments that make or break the move. The first is your grip. You need to have the arm of the opponent, completely attached to your chest. The higher up your chest their palm is, the better. Plus, remember to really grip and hold, whether it is the wrist or a sleeve.

The second key moment is the lift. This is something you need to spend some time drilling before you get it right all the time. The drill is easy- grab both wrists, place the feet in the hips, and elevate an opponent. The trick is to find a balance so that you keep an opponent “weightless” with not one part of their body touching the ground. This is easy to accomplish if you remember to keep your feet relaxed. The tenser your feet are, the easier it is to slip out.

Finally, the Helicopter armbar works mostly because it is a surprise attack,. The moment you have someone up in the air like that, plenty of things can happen. You might opt to go for a sweep, the helicopter armbar, or a Helicopter triangle. Or, you might just get back into a different variation of the guard that you prefer. The number of attack options makes your next move unpredictable which is why the Helicopter armbar is such a high percentage setup.

Last but not least, this mover requires patience. Form the closed guard if you don’t force an opponent to their feet, you won’t be able to get it. Moreover, you need to be patient once you lift them up and not rush to the armbar. Remember, it is gravity that will take them down when you remove a foot post, not you forcing them down.

The Helicopter armbar is one of those moves that will cause people to applaud you when they see it. Ti is also going to annoy opponents and bring you lots of personal satisfaction. It is just cool whichever way you look at it. Just remember to be patient, relax your feet, and have solid grips. The guard you choose to set it up from is down to you, and by all means not limited to the closed and De La Riva guards.