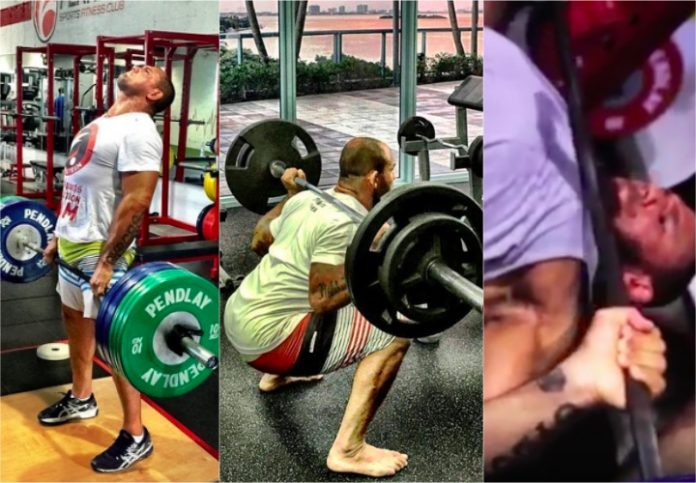 Grappling with a bodybuilder type dude that just walks through the doors is usually a lot of fun! Seeing them realize that muscle isn’t going to help them get out of chokeholds and leg locks are priceless. Until such a time you run into the bodybuilder type dude that actually knows how to grapple. Now, all of that muscle actually has a role to play and you’ll be into deep waters very quick. This raises the question when and how do bodybuilding exercise for BJJ athletes make sense and how you can make them work for you?

Being fit as a grappler is definitely going to make Jiu-Jitsu life easier. That said, it is not just about how strong and conditioned you are. The physical shape helps BJJ but it is not the end-all-be-all determinant. IF you can’t grapple you’re just another buff or jacked guy who only looks good if that. However, pair some good old strength with grappling knowledge and, most importantly good mobility and range of motion and you’ve got a winning formula. And the best exercises for BJJ strength might actually surprise you, at least when it comes to the modern-day strength and conditioning approach.

The Evolution (And Decline) Of  “Functional Training”

No aspect of the martial arts world is spared from the usual cycles of popular crazes that go around. When it comes to strength training for martial arts, we seem to be coming full circle. At first, the notion was that even looking at weights is going to make you slow and useless at martial arts. Boxers of old used to run for miles and focus on jumping rope, while wrestlers we’re religiously devoted to bodyweight exercises.

Then, someone somewhere managed to get great results while doing martial arts and bodybuilding and it all became tangled. For a while there, particularly during the early days of MMA, fighters trained like bodybuilders for most of the time. Hre’s undeniable evidence that this yielded good results. However, people soon figured out that training like a bodybuilder is actually a full-time job. combining it with another full-time job in MMA only got people partially good at both. Not really the goal.

And so, the hunt for the holy grail of strength and conditioning for martial arts began. People did anything and everything claiming it helps, from kettlebells to suspended yoga. While there are undeniable results form any physical training aspect, most of them just don’t make any sense when it comes to grappling. Lying on a BOSU ball while holding a barbell with different loads in a “spider guard” position is the definition of a waste of time. What grapplers and fighters in general need, is simple. Strength, explosiveness, a good gas tank, and some mobility to go with it all.

This is exactly where we come full circle. AS it turns out, some of those old-school stapes of bodybuilding are actually the perfect exercises for BJJ. All you need to do is do them right, and remove all of the nonsense.

Bodybuilding For BJJ – The Good Stuff

Before we get into the bodybuilding exercises for BJJ that make sense, let’s take al look at physique building first. In the old days, before all the steroid madness, people actually had to eat right and lift like crazy. That meant that building a physique like Frank Zane was a 24/7 activity. And even then, you’d most likely end up looking nothing like him, unless you won the genetic lottery. So, bodybuilders found the shortcut – steroids. Insanely crazy schemes of supplementing turned eventually ended up with the “freaks” of bodybuilding we see today. 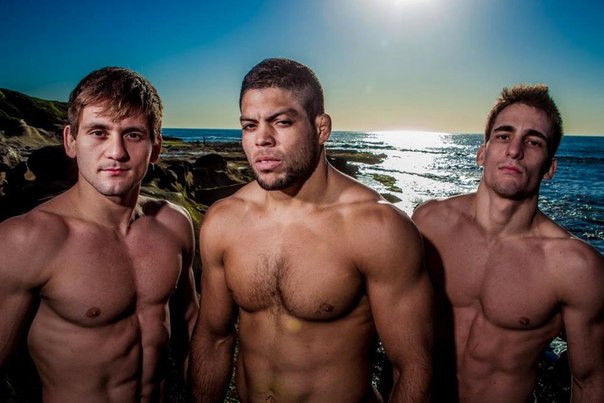 The thing with modern bodybuilders is that they have insane amounts of muscle mass and definition. However, they all start panting just by going up a flight of stairs. Now, I have no idea if Frank Zane ever grappled, but I bet he could hold his own if paired with a grappler. Any of the modern-day bodybuilding beasts that train and supplement in a very complex manner would have no chance. And that says plenty on the subject of efficient bodybuilding exercises for BJJ.

That said, certain exercises, like squats and deadlifts, are pretty much in everyone’s program nowadays. Well, news flash – these are also staples of bodybuilding as well! However, it is exercises like bench press, shoulder presses, and curls, to name a few, that get all the bad press. The simple answer is that every exercise can help you get better at BJJ. The secret is knowing how to use them.

The bench press is probably the one exercise that gets the most unwarranted bad press. It is considered to be the number on “bro” exercise out there, and there is a certain truth to it. However, that’s only applicable if you do nothing else except lifting. If you are grappling, you can actually benefit greatly from the bench press and all of its variations.

The bench press is actually one of the best exercises for BJJ athletes. It is a compound move that works a bunch of different muscle groups.  While the chest gets most of the attention, there’s also heavy involvement from the front shoulder muscles and the triceps. IN terms of grappling, being strong at a horizontal pushing movement is clearly a huge advantage. Whether you’re working from the bottom trying to escape, or attacking from the top, the bench press motion is used all over. The carryover from the bench press are numerous and extremely important in grappling. And you can’t get them just by squatting and deadlifting.

The shoulder press or any shoulder exercise for that matter is also something most grapplers avoid. The notion is that you do not need to press anything over your head in BJJ, so why train it? Well, why do pullups and chin-ups make for such great exercises then? Arent’ they vertical pulling ones? The answer here is that the range of motion and use of our shoulder extends much further than just overhead pressing. And even then, this is a movement pattern grapplers and fighters need to be strong at.

The shoulder press, particularly military press with a  barbell activates both your side and front deltoids, or shoulder muscles. Lateral, front and rear raise target every part of the shoulder muscle as well. In terms of grappling, any attempt on your part to fight off guard passes and finish throws and takedowns will include a lot of shoulder work. This is also true if you’re a fan of the front headlock position. 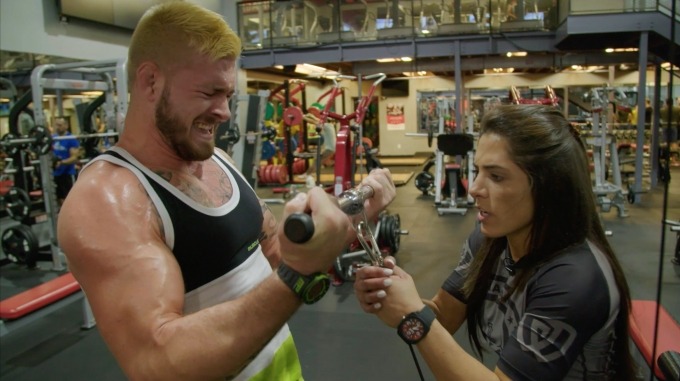 Another exercise that’s pretty much at the same “bro’ level of the bench press is the biceps curl. For a long time now, biceps curls are the marquee exercise of bodybuilding. Once again, if you’re using chin-ups, why not use different varieties of biceps curls as well? Give biceps curls on a TRX a try if you’re not a fan of weights and tell me that that pattern doesn’t apply to grapple.

The reason why curls are one of the best exercises for BJJ is the fact that they’re a multidimensional pulling motion. Grappling is much more pull-oriented as opposed to pushing, particularly in the Gi. So any pulling motion is hugely important, especially one that works at different angles. With curls, you can use different variations, from regular ones to hammer and reverse grip curls to greatly strengthen your pulling power, Furthermore, your grips and squeezing power on chokes will strengthen noticeably as well.

The triceps pushdowns and extensions are arguably the one exercise that seems like it has nothing to do with athleticism. Well, you’re wrong! The triceps are hugely important for grapplers and fighters. They are muscles that are involved in both pushing and pulling movements, which makes them pretty unique. Imagine being really stuck in side control. We all know straight-up bench pressing won’t get you out of there because you need frames to create space. Now imagine a basic side control escape and where your arms are. Form there flip the position and you’ll find yourself right into a triceps pushup.

To make this clearer, the triceps play the most important role in any pushing movement in grappling, particularly off the back. In fact, the triceps initiate movements, and the bench press takes over, for the most part.

As you can see, bodybuilding exercises for BJJ are not as useless as most people think. However, if you decide to train like a bodybuilder, you won’t get lots of success. There are two main reasons for this. First, the workload bodybuilder can take is inhuman, thanks to all the juice they’re on. Next up, if you did body part splits like a bodybuilder you’d have to train 7 days a week just to get to everybody part! The real trouble with training like a bodybuilder for BJJ has to do with programming and not the exercises themselves.

In terms of organizing your workouts, the best way to get the most bang out of these exercises for BJJ is doing some basic splits. The best ways here are going for a push and pull day, or a lower and upper body day. If you ask me, I’d go for pus hand pull, and depending on how many times per week you can train, further split that into vertical and horizontal movements. This is going to allow you to have exercises and shorter workouts, meaning you’ll recover better. In terms of sets and reps, focus on your goals – muscle building, conditioning, pure strength, or explosiveness and set them accordingly.

Bodybuilding exercises for BJJ are not useless. On the contrary, they’re the most proven way of getting stronger and more explosive. The only thing you need to consider is programming. Train smart and hard, use staple exercises, and keep things simple. This is the only proven way of actually getting better at martial arts as a result of strength training.

Strength And Conditioning For BJJ – What Is Best For You?

Solving BJJ Strength And Conditioning Once And For All