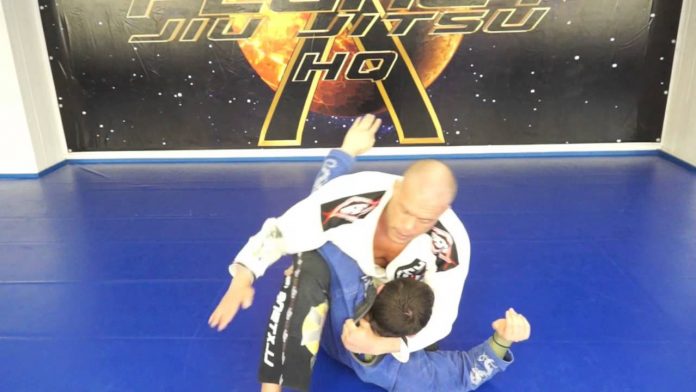 The mount position is one that you should definitely take seriously, And by seriously, I mean get into researching and trying out as many variations as humanly possible. Taking the mount for granted is only going to get you in trouble when you’re in competition or an MMA match. If you truly know the mount position, then you can reap all the benefits it offers, from positioning, through striking all the way to inescapable submissions. There are plenty of mount variations out there, and each of them has something original to offer. Speaking of originality, none of the mount variations are as unorthodoxly efficient as the monkey mount. It is one of Eddie Bravo’s innovations, but one that’s very applicable with the Gi. Perhaps even more so than in No-Gi.

The monkey mount is one of those 10th Planet Jiu-Jitsu positions that you run into by sheer chance. ti is exactly how I came across it. However, once you realize how potent the monkey mount is, it will soon become your go-to mount variation. Especially if you’re a smaller grappler or a female. This is not to say that bigger grapplers can’t use the monkey mount to great success. Lighter weights will, however, find a lot more of the control heavier guys take for granted. Today, I’ll do my best to shed light on the monkey mount and all the ways in which it can make your Jiu-Jitsu better.

One guy that certainly knows his 10th Planet positions down to a T is Brandon McCaghren. He is one of Eddie Bravo’s top black belt instructors and runs 10th PLanet Decatur. He has an awesome DVD out on all things rubber guard. Check out his “Rubber Guard: The Meathook” DVD today to introduce some 10th Planet slickness into your game!

The monkey mount is a position in which most of us end up, yet only a few recognize. the thing is that when an opponent tries to bridge as a defense, they open up direct pathways to this mount variation. Even if an opponent doesn’t give away the position, getting it from regular mount is a breeze.

To get into the monkey mount, you’ll first need to make sure you control the head. To do that, you’ll need an arm under their neck, lifting their head of the mats. Having the head high off the ground is imperative for controlling any mount. Once you have it, You need to focus on pushing the arm that’s on the opposite side down to the ground. Since you have one arm an all your bodyweight at your disposal, this is an easy thing to achieve. Once there, you can start working towards the monkey mount

Your opponent is likely going to try and bridge to that side, placing their free arm under your armpit. All you need to do is lift the leg on that side, and prop it against their back. this is going to keep your opponent on their side. Once again, aim to lift the head of the opponent as high as possible, while keeping the top arm trapped.

Finally, maintaining the monkey mount is going to require you to re-adjust a bit. Release the trapped arm and use that arm to control the head. Place your other arm around your own leg and grab the back of the lapel. Now you have perfect control. All you need is weight, which is fairly easy – simply take the weight off your leg in order to place it on their ribs via your butt. From there, it’s time to attack!

You can see how the monkey mount position has a lot to offer in terms of attacks. While you might be able to spot some direct attacks from there, keep patient and we’ll teach you how to develop a complete system. There are numerous options in numerous directions and they depend a lot on how the opponent reacts.

Even if submission attacks don’t work for some reason, you have a lot of transition options. One thing that’s always there from a monkey mount is the rubber guard. From there. you’re in a position to attack more or even return to the monkey mount with ease. Another readily available option is the back, which in itself, is the ultimate finishing position.

Let’s g over some submission attacks you can hunt from the monkey mount. While some are easy and often used, you’ll also see some more advanced moves that need a bit of skill to perform.

let’s start with something completely crazy. The Locoplata is actually as mad as the name suggests. When you get it down, though, you’ll see that it is actually a fairly simple move which can work often. the Locoplata is basically a mounted Gogoplata. However, compared to the Gogoplata, it has a lot more chances of success, given that gravity is now working for you, instead of against you.

Getting the Locoplata form the monkey mount requires just a small shift in position, the main thing to remember is to use your free arm to push down on the opponent’s head. For maximum effect, use the forearm to place pressure and cause discomfort in your opponent. From there, simply swing the leg that’s in a lunge position over, and aim to fall as close to the opponent’s shoulder as possible. This will get your shin deep enough so you can easily place the foot on their neck to get the tap.

For the straight jacket, you’ll need to start from a Locoplata. The only way to stop, or better say, to delay a Locoplata is for the opponent to grab your foot. When they do that, they’ll only fall deeper into the monkey mount trap. Now, they’ve given you access to the second hand via grips. Grab the Gi with a basic grip and strip it off your foot. Then, place the foot of the second leg on the opponent’s biceps. This is going to allow you to get the Locoplata leg off the opponent’s neck and place it around and under their head. Now slide the second leg over the shoulder and pull their arm behind their head. This is the straight jacket position.

From here, you can do whatever you choose to your opponent. You have easy choke options, neck cranks along with shoulder locks, straight armlocks and even wristlocks on both arms. You’re only limited by your imagination.

Since we’re talking about a Gi based system of attacks, we’ll throw in a great choking option. Yes, a Gi choke might be the last thing you associate with a 10th Planet technique, but it is a potent weapon form the monkey mount. In fact, the gi choke works great when your opponent tilts to their side too much. Now, your pressure is going to dissipate somewhat, and it’s harder to get into a Locoplata or the straight jacket. What you can do instead is to place the free arm across their neck, grabbing the lapel as deep as possible. Now, simply swing the kneeling leg over the head and fall to the other side. A simple leg extension is going to get you a tap due to a very powerful choke.

The triangle choke is one attack that’s really obvious from the monkey mount. However, going for a triangle is going to place you on your back in most cases. Doing that is not a particularly smart thing to do. As a general rule, you shouldn’t go to your back from an established dominant top position. However, in certain situations, it may be the best option for you.

When an opponent is turning to their side and propping on their elbow, the triangle is extremely easy to set up. All you need to do is focus on lifting their head as high as possible with your arms. The aim is to sneak your bottom leg over the shoulder of the arm the opponent’s propping on. From there, inertia is going to take you to your back for a strong finishing position. The best thing about it is that, if you adjust correctly, you might even end up back in monkey mount if the triangle fails.