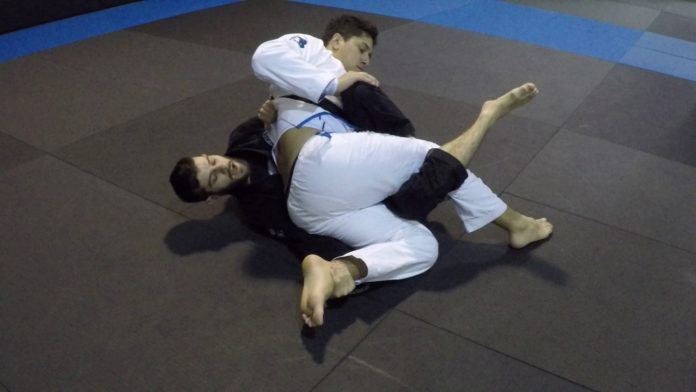 With so many complex and diverse guards in Brazilian Jiu-Jitsu, passing is truly a nightmare. Even for proficient guard passers, getting past the opponent’s leg is never easy. ti can be fun, yeas, but it can also be highly annoying. All the diversity and innovation people put into guards means you need to find adjustments and/or new passes for each guard out there. If you only focused on that part of BJJ you wouldn’t be able to master it, in a lifetime, let alone work on anything else! The silver bullet solution would be a BJJ guard pass that you can successfully use against multiple (or all ) guards with a high rate of success. Sounds too good to be true. That’s because it is.

There is, however, a BJJ guard pass that can get you as close to this as possible. It is more of a key BJJ movement than technical guard pass per se, but it has the power to slice guards apart.

The concept of the perfect BJJ guard pass to kill all guards is an unattainable one in reality. With that option out of the way, you can either go and train a different pass for all different guards or find some reasonable common ground. A good way to do it is to look back at what connects all guards. Once you find a common starting point, you can address it from a passing perspective. Doing this against most open guards, as well as some closed guard variations, there’s one movement that seems to have a universal effect on all of them. It is the simple, yet crucial BJJ hip switch.

The “Art” of Hip Switching In Jiu-Jitsu

Brazilian Jiu-Jitsu is a grappling martial art that places more focus on the hips than any other combat sport. All avenues of the hip movement have a huge role to play in Jiu-Jitsu. From flexibility to explosive power, the hips are the source of everything. Rarely any attack works without hip involvement, in one way or another. The same holds true for defensive work, where the hips are the main drive behind most escapes.

The movements which grapplers do with their hips are also very variable. Depending on the situation you could look to ship them away, open them up, rotate or switch them. This last one is a true staple of high-grade guard passing. Hardly any open guard BJJ pass is going to work without it as a starting point. But, what exactly makes this simple motion so potent?

The first thing you get when you switch your hips is a major change in weight distribution. The moment you start to shift your hips from one side to the other, your whole body weight is going to move in the same direction. This results in the creation of additional angles in a position where there aren’t any. These new angles mean less space for your opponent to work and more pressure for you. A guard passers dream combination.

next up is power. The hip switch is bot ha move anybody can easily do, and it is a very explosive move. Its power is only limited by the power of your hips, which is a highly trainable attribute. Explosion with your hips in a rotational manner means you can get past even the most flexible guard players. Furthermore, you gain a ton of stability in your final position, thanks to the hip switch.

As a BJJ guard pass, the hip switch is considered to be an advanced concept. The reason for this is that it won’t work unless you understand what we discussed above. Weight distribution, creating angles, the directionality of force and timing are essential. Unfortunately, there are all traits the take time to develop, so less experienced students need to take it easy and learn the basic guard passing sequences at first.

Against some open guard variations, like the butterfly or De La Riva guard, the hip switch is often the only way past. Form closed guard circuits it is a bit more difficult to use it, although not impossible. there are some really good passing options based on it, like the Tozi pass from closed guard, or several half guards passes.

Some people are simply better at passing the guard than others. One of them is Bernardo Faria, who has no trouble whatsoever passing anyone’s guard. His “Pressure Passing Encyclopedia” DVD has all passing essentials in it, including the hip switch. It is the perfect guide to get you through the door of advanced gaurd passing.

The moment your opponent elevates you, they’re going to try to sweep you to one side. The direction of your hip switch should be in the opposite direction. You should do it explosively and as completely as possible, before rewinding the hips back for the pass. The hip switch against their outstretched leg allows you to completely nullify the force of the sweep. Even better, the motion gets rid of the leg between you, leaving no more obstacles to a pass.

If the opponent has you in the air with both butterfly hooks, even better for you. Now you can look to pass in both directions.

Getting past the De La Riva guard when an opponent has good grips can be a real hassle. It is even worse when your opponent has crazy flexible hips that prevent all your passing attempts. The hip switch BJJ guard pass come to the rescue once again!

Form the De La Riva, the direction of your hip switch is going to be towards the leg that has the De La Riva hook. However, you’ll need to also control the opposite leg if you want to be successful. In order to do that, an underhook against the free leg is going to do the trick. Once you have it, switch your hips while swinging your back leg in a big arch around the hooked leg. You’re going to end up in a reverse half guard, or, if you like it more, in the 4/11 leg locking position.

Despite leaving it for last, this is where you need to start with your hip switch efforts. Messing it up from the half guard won’t cost you as much as doing so against open guards. So make sure that this is your starting point.

This is the easiest application of the hip switch for passing purposes. The reason you’re stuck in half guard is the fact the opponent has their legs locked, plus the knee shield to create space. In order to solve both, you simply need to switch your hips. this is going to get you past the knee shield and in a good position to establish a cross-face. Once you have that, wiggling your leg free is going to be easy.

Or, if you like a more dynamic BJJ guard pass, you might opt to isolate the far side arm from the cross-face. From there on you switch the hips again, landing in the knee slice position with an underhook. Again you can pass or go for yet another hip switch, this time on the other side and land in reverse half/leg lock.

The hip switch is not a complicated movement. In fact, some people do not perceive it as a technical move. The truth is that the hip switch is an advanced way of creating the best platform for any BJJ guard pass. Take a look at some of the world’s greatest guard passers. Do you notice how often and how explosively they switch their hips? The hips which not only helps with passing the guard but also with the retention of your newly acquired position. Although beginners might struggle with it, advanced students should aim to get this move down as soon as possible. It is the one move that opens the doors to a successful passing game. It is not a silver bullet but it is as close as a guard passing enthusiast can get.

If there is one BJJ guard pass you need to call your own, then you have to pick the hip switch pass. this simple motion can help you deal with just about any open guard variation, and a few closed ones as well. Make sure you do work on your hips, though, as explosiveness and flexibility can only further help your guard passing goals.

Three Ways To Open Up The Closed Guard