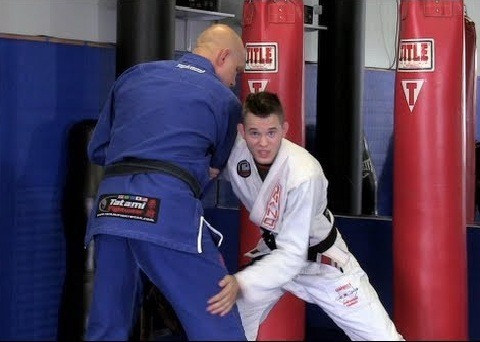 Jiu-Jitsu is for everyone, or at least so the mantra says. The truth is, Jiu-jitsu is Jiu-Jitsu, and it does offer something for everyone. However, if you want it to work for you, you’ll need to modify it and adapt it to your own strengths. That’s when Brazilian Jiu-Jitsu truly turns into something magnificent. This is a formula that works perfectly in every aspect of BJJ but it is particularly effective when it comes to standing. This is where the height difference in people is the most apparent. So, if you’re on the shorter side of things, that doesn’t mean that pulling guard is your only alternative. On the contrary, we have a selection of the best BJJ takedowns tailor-made for shorter grapplers.

Not one physical attribute you have is considered a weakness in Jiu-Jitsu. Yes, that’s right. Bulky or lean, tall or short, lanky or stocky, you have your own advantages in the sport of JIu-Jitsu. All you need to do is accept your strengths and start building your game around them. IN the sense of takedowns, this usually means tailoring a game according to your height. Your height will dictate the leverage you can get, and no, all takedowns in Jiu-Jitsu are not made equal. But how do you go about figuring out which are the best BJJ takedowns for smaller people? Worry not, we did it for you. All you need to do is read on.

Height (Or Lack of It) Is An Advantage

Brazilian Jiu-Jitsu is all about leverage. The only problem is, people, take a lot of time to actually figure out where that leverage is and how to best use it. In the meantime, they’re stuck parroting techniques that may or may not work for them. That said, learning as many techniques as you can is never a bad thing. However, focusing on those that will actually help you perform better, is a smarter approach to grappling. It is what all the “big boys and girls” of the highest levels do.

The beauty of BJJ is that there’s nothing that is actually a weakness. Every physical attribute, or lack of it, that you might have, is actually an opportunity for you. Height is something that’s bound to be different between people, and you need to factor it in your training. After all, grapplers from other martial arts like Judo and wrestling have been doing it for years. You don’t see them give up on takedowns and go for a guard pull, do you? So why should anything be different in Jiu-Jitsu?

When it comes to height, smaller people have a distinct advantage, particularly when squaring off against taller opponents. Their center of gravity is lower, and they have the mobility factor working to their advantage. Sure, you might have to “sacrifice” some leverage and perhaps distance, but that’s more than worth it, given the options you have for BJJ takedowns. Being on the shorter side of things means you can throw just about anyone with ease, given that throwing people that are smaller than you is actually harder. To that extent, there are takedowns that might work, and then, there are the best BJJ takedowns for the smaller framed grapplers. Do you know what your best bets are?

Preparing the best BJJ takedowns for your height and reach is easy – you just need to practice them over and over again. In fact, the more you do them against different sized opponents, the better you will be at them. In the standing portion of Jiu-Jitsu exchanges, height really does matter and can change how well your takedown attempts work.

With smaller people, the trick is to manipulate your center of gravity into a better position without letting the taller person control the distance game. This is where movement comes in to play. Simply use your feet to keep changing the angle and bating your opponent into your preferred grip configuration. Being shorter means you will have to work for your takedowns, but once you set them up there’ll be no escape.

The best BJJ takedowns for smaller people work by getting you either low or behind an opponent. You could try to go for the head but that oftentimes proves less effective than aiming to go low. By low, I mean going low on the legs, or even underneath the opponent. Moreover, going around is always a perfect option, as it is an easy road to the back, all but guaranteeing a takedown. Finally, attacking the legs with carefully chosen sweeps is also a solid strategy, particularly if you can blend in some of the other attacks as well.

Let’s look at several of the best BJJ takedowns we can seal from wrestling. Whether you do them in the Gi or No-Gi is down to you, but they do tend to work better without a kimono. Here, the focus is on moving a lot and getting really low, really fast. Of course, distance makes or breaks your attempts at takedowns, so we have several that work from different ranges.

The Duck Under is a real wrestling classic, one that kids learn as they start wrestling training. It is also takedowns that work perfectly at all levels of wrestling, and for that matter, Brazilian Jiu-Jitsu. It allows smaller people to get a takedown without actually shooting for the legs. Since it works from a clinch, it is a close distance takedown. IN essence, you set up your arms like going for a high crotch but turn outward instead, ducking under the arm. Turning back towards the opponent begins you in total control to finish the takedown.

Working form a middle distance, when you’re grip fighting, but not yet in the clinch, going behind is your best bet. The arm drag and or Russian tie work perfectly here, although I’d say the Arm drag is a better option for BJJ. Things o remember is that you need two arms on one, as well as that you need to pull on the shoulder and not the elbow. You’ll get some neat takedowns this way, or, at the very least, full back control.

Last but not least, one of the best BJJ takedowns in general – the single leg. This one works from the furthest distance but is somewhat of a modification. In fact, it is a low single-leg takedown. How low? The lower you can get, the better. And, when you’re on the smaller side, you also have to look for the outside angle before you set it up. Remember that it is all about driving with your shoulders once you’ve got that leg up from the mats.

For those more entertained by grappling in the Gi, every option outlined above is definitely going to work. However, factoring in the Gi grips your opponent might grab, and grab first due to reach advantage, is very important if you want to be efficient at takedowns. Once again, Judo has a wealth of moves that work perfectly for shorter grapplers, and all you need to do is train and repeat them.

One thing you’ll notice in Judo is the tendency to either stay away and foot sweep or go down underneath ana opponent. At least in the case of a smaller grappler. A great example is the Kata Guruma AKA Fireman’s Carry. This is a great move to hit, particularly as you can make it with a high crotch attack. Moreover, you need a sleeve grip to get it, and oftentimes, the opponent will provide one for you anyhow. Once you get to a high crotch grip you go to your knees, Placing the opponent over both your shoulders. That’s the moment of truth and the point of no return for them.

Another real favorite of mine when it comes to the best BJJ takedowns for small people is the Sumi Gaeshi. Make a note that I do not say Tomo Nage, but rather Sumi Gaeshi. There is a difference. The best way to set up a Sumi Gaeshi is to make your opponent ben at the waist, which is easy to accomplish with a high grip on the collar. From there on, Once your foot is hooked behind their thing, you’re just a backward roll away from a takedown that ends in the mount.

Finally, if you want to work off a distance, forget about hip throws. Those are designed for the taller grapplers and you’ll be hard-pressed to execute one if you’re the smaller person. Instead, opt to sweep the feet from under your opponents. Any of the Judo footsweeps or Ashi Waz will do, but one to focus on is the Kouchi Gari or inner trip. It works like a charm.

Thre are plenty of takedowns out there to consider if you’re a smaller grappler. All it takes is factoring in height but do it as an advantage, not as a drawback. That will lead you to the best BJJ takedowns that will work for you. Whether they’re wrestling based or Judo based. From there on, just keep repeating whatever it si you choose until you can pull it off on anyone.