One of the idiosyncrasies of training Brazilian Jiu-Jitsu is people showing up for class late. This is a worldwide phenomenon and not one that usually has sound reasoning behind it. There’s something about BJJ class structure that seems to put lots of students off. Or is it just that rolling is so much more fun? The problem with this practice is that it is disrespectful and tends to lower the quality of people’s Jiu-Jitsu skills. All in all, you wouldn’t be late for a school class or your job, so why should Jiu-Jitsu be any different?

BJJ students often have their own reasons for not coming into class on time. Been there, done that, to be completely honest. However, now I’m in a position to give both sides of the story. I’ve been one of those students, that, justifiably or not, was repeatedly late for BJJ class. From a coaching standpoint, I can also attest how instructors feel on the subject, and what it does to the class structure. As trivial as it may seem, coming in late does affect everyone in class, and should be something that’s not tolerated in Jiu-Jitsu.

Contents hide
The Common BJJ Class Structure
Why Are People Late For BJJ Class?
How Soccer Can Help BJJ
Conclusion 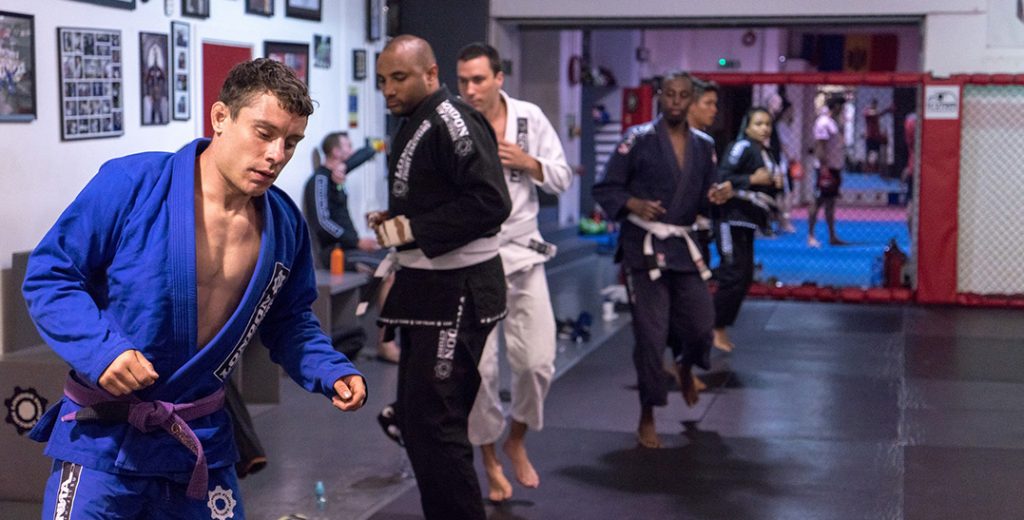 Jiu-Jitsu classes around the world tend to have a common structure, apart from some subtle differences. In essence, it all starts with a warm-up, followed by some technical work. After that comes specific training, either as drills or in the form of positional sparring, sometimes even both. Finally, a few rounds of live rolling usually cap things off. Unless it is an open mat, this is the structure you’re most likely to run into at any given BJJ academy in the world.

Now, the logic behind such a structure is a sound one. Yers upon years of training have demonstrated what eth best class structure is. After all, the point of a BJJ class is to learn, not just fight. This is precisely the distinction people that tend to habitually late fail to make. Open mats and competition training classes are intended for just that. During regular class, the emphasis is on learning. And not only learning submissions and guard passes.

The first lesson is one of respect. Coming in early, getting ready and getting on the mats as you’re supposed to, shows respect first and foremost. It also allows A BJJ class to start, flow and finish as intended. Secondly, you should never ever skip warm-ups. BJJ warmups are much more than just random sequences of exercises. In fact, they serve the purpose of teaching you how to move for Jiu-Jitsu, something that is severely underrated. Finally, the drills everyone hates so much are the best way of really understanding the techniques taught during class. Remember writing the same sentences over and over again in high school? Well, it is pretty much the same.

Why Are People Late For BJJ Class?

Before I go into the reasons that have people late for BJJ class, let’s just get one thing out of the way. Sometimes, people need to come in late due to very understandable reasons. Job schedule, family obligations and a bunch of other situations are among a handful of excuses that are genuine. As long as the situation is cleared with the instructor(s), you can show up later. Just stay quiet, get in and wait to be included in the class.

Some of the more common reasons for being repeatedly late to BJJ class include laziness, the unwillingness to take part in technical training and irrational hatred of warmups. In terms of laziness, you get those that simply want to come in and roll. They do not like to warm up, nor actually participate in class. These people come in and strut about getting ready until class ends. They make no effort whatsoever to join in before the rolling rounds. In some cases, people are not lazy, but they think they’re better grapplers than they are. The cold hard truth is that you do not know what’s being taught in class just because you’ve done it before. Thinking you won’t learn anything new and just showing up to roll is the worst possible reason for coming in late.

The phenomenon of trying to avoid warm-ups at all costs is another baffling one. Instructors could come up with new and effective warm-up ways for each class, and people will still do anything to avoid them. Going straight into training is like trying to write without really knowing all the letters. BJJ warmups are there for a reason. Do not skip them!

How Soccer Can Help BJJ

This is an area in which even the best academies still struggle to find a practical solution. Everyone that comes in late actually breaks the flow of a BJJ class. An instructor has to acknowledge you, and eventually, let you into class. Other students also tend to look at who is coming in and even wave at them. All of this means lapses in focus and attention and a less productive class for everyone.

This is where BJJ can learn something from soccer. Unless a student has a valid reason to be constantly late, the card system will do the trick here. A yellow card is a warning, and red is automatic DQ in soccer. The way this would work in BJJ would be by using yellows as verbal warnings, just like in soccer. Red would be a ban of some sorts. The threat of not promoting someone is as straightforward as it gets, but it doesn’t always do the trick. Not allowing people to roll unless they’ve been in class from the beginning is one great strategy though!

Just so it’s clear, even world champions can not afford to be late for class. The example of Keenan Cornelius’ punishment in Atos is a great one. Just recently, Keenan didn’t manage to show up in time and had to pay the price, just like everyone else. Cornelius was not allowed to train at all due to Atos’ no-nonsense policy on tardiness. Having everyone, including black belts subject to the same rules is a great way to enforce such a rule!

Discipline is a huge part of martial arts. Brazilian Jiu-Jitsu is probably the most laid-back martial art in the world. As such, instructors tolerate certain behaviors and always have a friendly attitude towards everyone. Everything has limits, though, and you need to know where the line is. Coming in late is bad for everyone in a BJJ academy. As such, make sure you’re not the person that ends up getting a red card and suffering further consequences! Show up on time!