One of the best BJJ fighters in the world, Kaynan Duarte revealed the plans to fight in MMA in the future. But he will not rush like many other grapplers have done in the past.

ADCC World champion Kaynan Duarte is planning his MMA debut in the future. Duarte confirmed this news in an interview with the FloGrappling portal, that he made before his match against UFC Middleweight Rodolfo Vieira at Who’s Number One Event. Kaynan Duarte Submits Rodolfo Vieira in only 2m30s.
They seem to have serious plans in Atos when it comes to MMA. A little over a month ago, Kaynan’s teammate Lucas “Hulk” Barbosa revealed that he is planning to make his MMA debut in the future. He posted footage of him working on head movement and striking skills.
In addition to Barbosa, Andre Galvao, the head coach of Atos, Multiple ADCC and BJJ World Champ Announces comeback in MMA, after a long break. 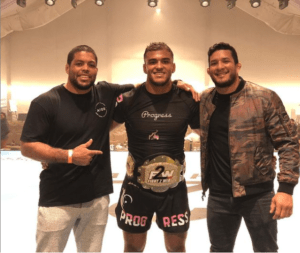 Kaynan has not confirmed when exactly we can expect his debut, he explained that he won’t want to rush.
In the interview with FloGrappling Kaynan said:
“I want to get good at boxing and Muay Thai, I want to get very technical, and I want to learn very well. So in two years and a half, I can be ready to fight MMA.
Since I was a kid I like to fight, it’s something that I have in my blood. I like this energy of fight and so I just put in my mind I’m gonna keep fighting in Jiu-Jitsu for sure, I don’t want to leave Jiu-Jitsu, but I want to get ready now, so in two years if I don’t change my mind, I want to be in MMA for sure.”