Rickson Gracie is widely regarded as the greatest Jiu-Jitsu practitioner of all time. The question is Why? What is so special about his game? When we listen to people who have trained with Rickson, usually the story goes like this: „Oh, his pressure and his control are amazing, I couldn’t do anything to him“.

In a recent interview with the Brazilian Portal do Vale Tudo, Jean Jacques Machado shared a little insight that we don’t hear very often about Rickson. It’s a very well-known defense concept. For sure, it’s great to have the confirmation that he uses this concept as the foundation for his game. 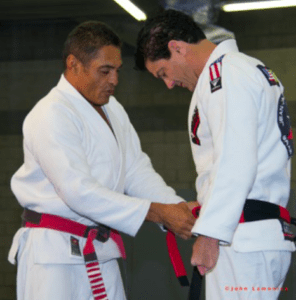 “What most people don’t see is that the best part of Rickon’s game is his defense. His defense allows him to play a super aggressive game.
So, he would go to Gracie Barra and they will have like 30 guys, all the top guys from Gracie Barra. Rickson would say choose way when it starts, from the back, from the mount, from the armbar position, anywhere. With all of those guys, he would train for 1-2 hours. starting from the initial position and then escape and submit you from that same position that you have to choose before.
But he wasn’t doing that against white belts, all against black blets.
Relly tough black belts. I’m not going to name names here but I saw a really good black belt there, and I would ask myself how’s that possible.
He wasn’t training with one person, it was 30 people in a row, he gets to the end of the line and says ok let’s do it again.
It’s really impressive because with his defense concept he’s already one or two steps ahead of you. It seems like he’s reading your mind. That gives you confidence, how you gonna beat me? You’re not gonna beat me, I’m gonna beat you. The best part of his game no doubt.
He reads your game through his defense, he finds the holes in your game through that. It’s really impressive.“

A great defense will give you the confidence to take bigger risks and to play more offensively. That’s because you know if something goes wrong you can always rely on your defense. At the same time, it will help you to read your opponent and find holes in his game.