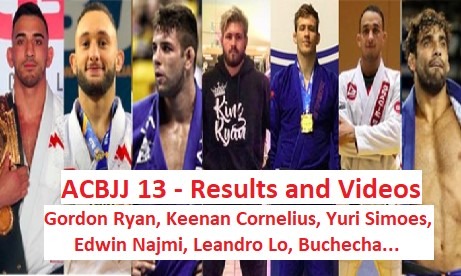 ACBJJ 13 Results and Videos. Acbjj 13 Gathered The most Famous BJJ practitioners and grapplers around the world. There’s a lot of good matches like Gordon Ryan vs Vinny Magalhaes, Marcus Almeida Buchecha vs Joao Gabriel Rocha, Leandro Lo vs Gabriel Arges, Keenan Cornelius vs Yuri Simoes… Here we bring you all the most interesting ACBJJ13 videos and also ACBJJ 13 full event video.

ACBJJ 13 took place on May 05, 2018 in Long Beach, California and it was probably event with the best names and grapplers ever. There is simply no event like this, besides ADCC, that features this many great BJJ practitioners and Competitors. This event brought us some very interesting matches and some results are really surprising.

Leandro Lo defeated Gabriel Arges on points in the 85 kilos division by winning all 5 rounds. Leandro Lo was able to impose his own style to Gabriel Arges.

In the first round, Arges tried the armbar on Leandro Lo but it was loose. Armbar from Arges didn’t really pose a real threat to Leandro Lo. He was able to escape from it pretty easy.

In the second round, Leandro Lo took Arges down with a single leg takedown. It was 2 points for Lo and that’s how round 2 ended up. Lo was trying to pass Arges’ guard but was unsuccessful while Arges was working on sweeps holding Lo’s Lapel throughout the entire round but with no success. Lo was very stable on his feet and all attempts were Arges easily amplified by Lo.

The third round had a similar start as round 2. Again, Lo was able to take Arges down, even passing Arges guard but Arges got his guard back pretty quick. Arges was again trying different sweeps but with no success.

4th round was a deciding round for Gabriel Arges vs Leandro Lo. He needed a submission victory in the 4th and 5th round because he lost the last 3 rounds by points. Arges immediately pulled guard and was golding Lo’s leg for some time but Lo was able to stop him. After some time Lo passed Arges Guard and went for his back but Arges was able to escape it going up on his feet. Again, Arges pulled guard and that’s how the round finished.

In the 5th and Final Round, Arges continued with his play to play guard. Lo managed to pass it and earn 3 points for it and that was it. Arges didn’t manage to keep the title and the 85 kilos division champion is now Leandro Lo.

This title fight was taken by Buchecha by pretty much dominating Joao Gabriel throughout the entire match.

In the first round, Marcus Almeida was able to take down Joao Gabriel Rocha with a Single Leg Takedown. He wrestled him down but Rocha somehow managed to stand up. Again Buchecha took Rocha down but the fight went off the mats. After that Buchecha pulled guard and Rocha was doing some good guard pass but without success as Buchecha turtled up and that’ the first round ended up.

2nd round was all about to stand up. Both athletes were on their feet and there was no action at all until the last minute. Jao Gabriel pulled a half guard and Buchecha managed to get on his back after the scramble in last 10 seconds but there wasn’t enough time to get the points for it.

The 4th Round brought some stand-up action at the start. Buchecha tried to double leg Rocha ending up off the mats. He continued with his strategy from the last round trying to take his opponent down and if it’s not working he pulls guard. This time Joao Gabriel tried to stay up but Buchecha managed to sweep him and get into the mount position working for an armbar. Rocha managed to escape from it getting on his feet. That round ended up with 9:0 point win by Marcus Almeida.

The 5th and final round started with Almeida trying to take down Rocha with a lot of wrestling and Judo takedowns. After the Single Leg takedown attempt from Almeida, Rocha defended it and mounted him but not long enough to earn points for it. They ended up on their feet with Almeida pulling guard and that’s how the match ended up. Marcus Almeida defeats Joao Gabriel Rocha by Points:  R1 0x0, R2 0x0, R3 0x0, R4 9×0, R5 0x0

You can check the Marcus Almeida Buchecha vs Jao Gabriel Rocha full match video in the full event video at the end of this article on 4:32:00.

In Gordon Ryan’s ACBJJ debut he was matched against Vinny Magalhaes. Gordon is a huge submission only BJJ and ADCC star but this time he wasn’t able to impose his own game to Vinny. Vinny Magalhaes played this match very good, imposing his own style to Gordon Ryan.

In the 1st Round, Vinny was able to take down Gordon Ryan very fast and pass his guard.

After the lead of 5-0 by Vinny in the first round he was able to maintain control and protect his points lead till the end of the round.

Second round seemed like Gordon changed the tactic. At the start of the second round, he tried to double leg Vinny but unsuccessfully. Vinny managed to stay on his feet and get double underhooks and outwrestle Gordon off the mat. Both athletes were trying to fight on their feet but after some time Gordon decided to pull guard. He was losing the first round and probably figured out he needs to win that round and staying on his feet against Vinny wasn’t didn’t seem to manage it. Vinny’s strong stand up didn’t allow him to do anything.

In the Third Round Gordon Ryan, probably, taught by experience from the previous rounds immediately sat down. In this round, Gordon was trying everything to catch Vinny’s leg but with no success. Inverts, scrambles, and tries from Gordon Ryan didn’t have any effect and at one point Magalhaes was able to catch Gordon’s leg. It’s pretty hard to finish Gordon with a leg lock so he got out, but Vinny Magalhaes was able to win the fight on points against Gordon Ryan.

We can say that Gordon’s gameplay was constantly shut down by Vinny who manages to neutralize all of Ryan’s attacks and tries to impose his own rhythm.

You can check out Gordon Ryan vs Vinny Magalhaes Full Fight Video below: