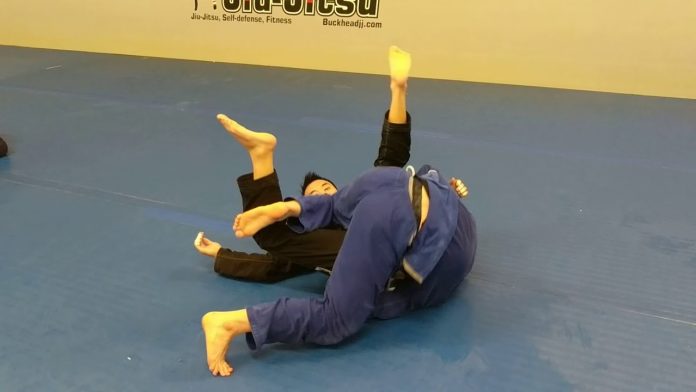 What I really love about BJJ is how much you can add to it from other grappling martial arts. There’s a goldmine in other arts such as Judo, Sambo, wrestling, etc that we’ve barely tapped in as Jiu-Jitsu practitioners. Some of the moves those arts offer are already a huge part of BJJ, whether they are just borrowed or modified. However, there are also moves that we do not explore, due to reasons we’ll look int later. The fact is, there are some grappling fundamentals form other arts that can really give your BJJ game a boost. One such technique is wrestling’s Crab Ride, the forefather of the BJJ Berimbolo.

Grappling martial arts do have a lot to teach us. The older the art is, the more hidden gems it contains. Given that wrestling is arguably the oldest grappling martial art ever, it’s easy to see how much-untapped potential it holds for grapplers. So far, we’re very keen on using wrestling takedowns on a regular basis. Although not as often, we also use some less known techniques, like the wrestler’s guillotine AKA the Twister. However, there’s one move that western wrestlers really rely upon, and it’s not about takedowns. It is a transitional move that helps with pinning. The Crab Ride is one of those grappling fundamentals that the potential to work in any grappling martial art. And it is a particularly good fit for BJJ.

The Power Of Grappling Fundamentals

Regardless of the martial art, some grappling fundamentals easily transcend the borders between different arts. Whether you go for an armbar in Sambo, Judo or BJJ, you’re still bound by the same mechanics. the same holds true for foot sweeps, chokes, etc. However, there area also grappling fundamentals that involve movement rather than a specific goal. They have the task of providing control and opening other options. The control part is what is valuable to all martial arts. The opening will vary depending on the art and goal at hand.

A perfect example of the above is the Crab Ride. Originally form freestyle wrestling, this position is a simple transitional move that offers a huge amount of control. The move utilizes foot hooks, something we take for granted in Brazilian Jiu-Jitsu. In the case of the Crab Ride, one hook goes under the opponent’s ankle. The other hook can be out, or, more often, at the level of the knee on the same or opposite side leg.

The power of the Crab Ride is in the indirect control that it provides over the opponent’s hips. Controlling both legs with both the hooks and sometimes your grips mean you can take your opponent into virtually any direction. it also means you can prevent them from moving if that is your goal. As fundamental and simple as it sounds, this move is actually the foundation of modern BJJ techniques like the Berimbolo, Baby Bolo, etc.

We all know that wrestling, in a nutshell, is about your opponent to the ground, and keeping them there, pinned. In most cases, once the match ends up on the ground, wrestlers will do anything to keep their backs off the ground. A position that they often end up in is the “all-fours”, or more commonly known as the referee’s position. This is where the Crab Ride can really make a difference.

The goal of rides in wrestling is to allow you to hold the opponent down from the bottom position. The difference between this and a pin is that you’re on the bottom as opposed to being on top. It is a highly technical move and part of the grappling fundamentals taught as early as high school wrestling.

Getting the Crab Ride provides the attacker with the option of controlling the legs and hips and getting the opponent all the way to the mats. There are plenty of different options that wrestler can do from this ride. Usually, the goal is to get upper body control against someone in the referee’s position an use that to force them to turn. This opens up the Crab ride, that, via the elevation that he hooks provide, allows wrestlers to get the opponent’s shoulders to the ground and hold them there for as long as it takes.

In BJJ the Crab Ride actually has many more applications than in wrestling. Due to the nature of BJJ, transitional moves such as this are really useful at all levels. Some of the most prominent BJJ fighters to use the crab ride are Caio Terra, the Miyao brothers, Gianni Grippo, Marcelo Garica, and many others.

Crab riding in BJJ can be done from a variety of positions. Give the position’s basic mechanic, you can see how close it is to back control. Conversely, transitioning in and out of back mount is really easy. Against a standing opponent, a whole new world of opportunities opens, by way of Berimbolos. The Crab Ride is also useful to break down the turtle, enter the 50/50 guard or even hunt for heel hooks. There’s even a great way to use it from standing and both get the fight to the ground and get a finishing position with just one move.

Attacking the back is extremely easy from the Crab Ride. These are two grappling fundamentals from different arts that work flawlessly together. Most often, it is done against a standing opponent, when you have the ride from behind. In this instance, you have a belt and ankle grip and both hooks behind the opponent’s knees. Once you lift their hips in the air, the goal is to transition into the truck position, briefly, on the leg opposite of the side of your belt grip. Once there, getting the back is as easy as extending your hips and bringing the opponent into the middle.

Gianni Grippo is a real maverick when it comes to the Berimbolo. Naturally, he is also very well versed at the Crab Ride, particularly from the De la Riva. Check out his take on riding your way to the back in his “All About The Bolo” DVD instructional.

A surprise contender from the Crab Ride is the heel hook, It is definitely not something people are used to, and it is a  real black belt killer move. In this instance, the ride is from the front, although the mechanics are much the same. In case of a double guard pull, this is a great way to finish fast.

Basically, you want to make sure you get a tight ride and lay on your back while pulling one of your opponent’s legs on top. The Crab hooks make sure you can do this with ease. Once there, you switch the grips on the top leg and get back up to your butt, while gripping the knee with the other hand. The other leg remains in the Crab Ride, thus allowing you to easily thread your now free leg in the Inside Senkaku position. From there on, you already know how to finish a heel hook.

The De La Riva guard is another position that works perfectly with the Crab Ride. It is actually down to this ride that the De La Riva became the launching pad for the Berimbolo. It works both against standing and kneeling opponents, but it’s much better when the opponent is kneeling.

Your goal with the De La Riva is to get the opponent on their butt. Whether you use a regular De La Riva or a spider/De La Riva hybrid is down to you. Once the opponent’s butt is on the ground, you invert and get your hooks in the Crab Ride position on the near leg. From there you can choose whether to get to the back like before or go up to get a seep. As a bonus, if you sweep, you end up in the leg drag position.

A very cool variation of the Crab Ride for BJJ comes from the top turtle position. In this case, you start off just like with any turtle attack, with one arm around the opponent’s waist. The goal is to secure a grip on their Gi so you have an anchor for the ride.

To set the ride up, you need to hook your far side leg to the opponent’s near side knee. Once there, you won’t be trying to pull the opponent down to the butt like in wrestling. Instead, you’ll look to use the anchor and hook to pry open the legs, so that you insert a second hook behind the other leg. Keep your free arm posted on the ground. With a cartwheel-like motion, switch to your other side and you’ll end up in the leg drag position once again. While this application might look fancy and acrobatic, it is still based on sound grappling fundamentals and has a high rate of success.

This is a real Marcelo Garcia special. The Crab Ride can also tie in well with takedowns, particularly those that get you behind the opponent. A simple option is to get into the ride straight from the body lock from standing.

Once you’re in the full body lock, an opponent is going to try and manipulate their center of gravity to stop you from taking them down and taking their back. From there, Marcelo likes to use both feet to put simultaneous pressure behind both of the opponent’s knees. This will get even the most stubborn of opponents down to their butt. From there on, you can get the back, go to the Truck or whatever it is you’re after.

All in all, using grappling fundamentals from one art in another is usually a good idea. AS long as you stick with real foundational, high-p[ercentage moves, you’ll be able to use them under any grappling setting. Although often used in BJJ, the Crab Ride does have its roots in wrestling. Therefore, it is prudent to turn to wrestle to learn the details and mechanics of the move. Then, it’ll not only work in BJJ, but it’ll work against all kinds of different opponents.

The One De La Riva Footlock That Really Works!

How To Do The Bulldog Choke Just Like Ben Askren