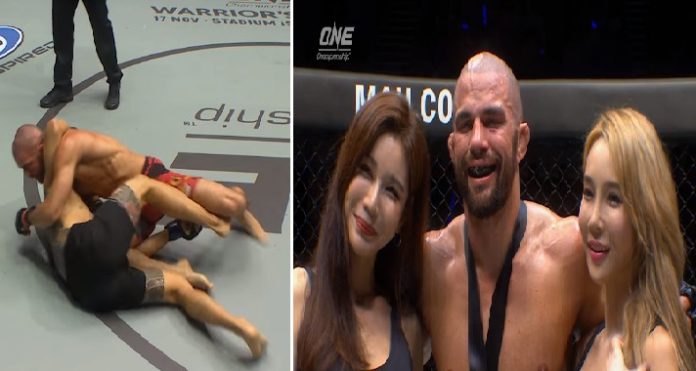 Garry Lee Tonon is still undefeated in his MMA career with 3 wins by submissions. A few minutes ago he submitted his third opponent in ONE FC Championship Sung Jong Lee.

The first round started with an exchange of few strikes until the point where Tonon secured a takedown on Sung Jong Lee. As it was hard for Tonon to keep Lee on the floor both fighters returned to the feet very soon. Tonon took the better of that situation and managed to land a few knee strikes, and Lee connecting a few nice strikes on Tonon.

At The beginning of the second round, Tonon was landing multiple kicks while Lee was responding with strikes. It was back and forth fight where Tonon got caught and got a cut under his eye although he was winning the stand-up exchanges.
With around three minutes left in the second round, Garry again did a great Takedown and immediately went for a guillotine choke. Lee was able to defend the choke for almost a minute but after Garry did some adjustments he got the tap from Lee with 2:20 minutes left in the second round.

The way Lee lost this fight was probably very disappointing for him as he’s the member of the 10th planet in Korea. Before the fight happened Lee was very thrilled with it.

“When I first heard his name, I couldn’t believe it,” Lee says. “I was surprised and thrilled all at the same time.”

“I am a mixed martial artist with jiu-jitsu as one of my strengths,” he explains. “I cannot ignore his power and experience, but I am a better all-around martial artist.”

As confident as Lee was he ever went so far to say that he wants to submit Tonon:

“Many people will tell you that it will be impossible to submit Garry Tonon, but I will try my best to display my jiu-jitsu on the night,” Lee said.

Unfortunately for Sung Jong Lee, he wasn’t able to submit Garry Tonon, and he was submitted instead.

As you can see in a video below “The Lion Killer” did a beautiful guillotine choke in the second round. Garry’s coach and friend Tom DeBlass commented Garry’s victory on his Facebook profile:

“Beautiful guillotine choke in the second round by @garrytonon. Garry showed an incredible amount of poise in this fight. Although Garry dominated the stand-up exchange, he got caught one time that opened up a cut under his eye. It didn’t phase him at all” – Wrote Tom DeBlass

Grappling wizard Garry Tonon locks in a tight guillotine to force the tap from Sung Jong Lee at 2:04 of Round 2!

Grappling wizard Garry Tonon locks in a tight guillotine to force the tap from Sung Jong Lee at 2:04 of Round 2! Watch the full event LIVE & FREE on the ONE Super App ?http://bit.ly/ONESuperApp | TV: Check local listings for global broadcast

Posted by ONE Championship on Friday, November 9, 2018