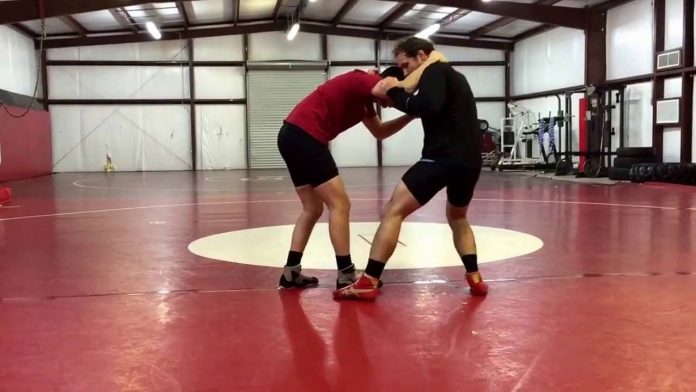 There are certain things in Jiu-Jitsu that we do that do not make much sense. For example, we tend to consider double leg takedowns, or Judo hip throws and sweeps as things beginners should learn directly. At the same time, there’s little talk of grips, posturing, balance, and footwork. It is like putting someone in a car and telling them to go straight into a rush hour without really explaining how they should be driving a vehicle. It doesn’t make sense for driving, so why should it for Jiu-Jitsu? The thing is not that people can’t learn that stuff, it is just shat by teaching them things directly, we tend to skip over some basic moves that will actually help them learn faster. When it comes to setting up a wrestling takedown for BJJ, the Shuck is one of those wrestling moves that are extremely underutilized in Jiu-Jitsu.

Have you ever noticed how much time Judokas spend perfecting their entries? They do those entry and footwork drills for hours upon hours. The same is true for wrestlers. Now, in BJJ, there are so many ways to organize drills, that we do tend to slack. And that is particularly true when it comes to the throws and takedowns department. While we don top have to put in the same hours Judokas and wrestlers do, given the different demands of BJJ, we still need to know some essentials. One reason why a double leg takedown needs a lot of time to start working for people in matches has a lot to do with how we teach the setup. And in BJJ, we tend to brush over it.

Ending up with a takedown for BJJ that is effective, but only after you spend as much time working on it as a wrestler. Not really the point, when at the same time, you’re also trying to learn other takedowns, and all the BJJ moves on the ground.

How does any grappling exchange begin? By placing your hands on someone, literally.  In a BJJ sense, that means grips. Now, whether we are talking Gi or No-Gi grips, the fact of the matter is, there’s no grappling from a distance. The current COVID-19 situation certainly made us aware of that. Well, let’s come back to the mats with an important lesson learned, and start focusing on the things that work for other grappling martial arts and incorporate them into our BJJ curriculums. After all, isn’t the point to teach people Jiu-Jitsu and make them highly effective in as little time as possible?

When it comes to wrestling, three of the most useful moves, from child-level all the way to Olympic level are Russian ties, arm drags and duck unders. And they all have something in common – they tie up the upper body. If you look at how most wrestlers set up actual effective takedowns, you’ll see that they tangle with their upper bodies first. In other words, the get a grip on an opponent. So why do we try to do double leg takedown, for example, from inconceivable distances in BJJ?

The shooting and penetration step and all that jazz are important. But all of it becomes so simple when you put a person on the back foot. And upper body ties do just that. In fact, there’s one wrestling move that can work as position zero for just about and takedown for BJJ worth giving a try. That is the wrestling Shuck, yet another of those upper body throw-bys that people don’t even notice when they watch high-level wrestlers grappler or fight in MMA. In Jiu-Jitsu, we have ourselves to blame, for trying to teach people how to run before they learn how to stand. It is not too late to re-discover the basics, though, both for seasoned grapplers, and those just signing up.

What exactly is the Shuck? It is a way of making your opponent expose their back. Since this is not a good thing to do in any grappling martial art or sport, both standing and on the ground, people tend to react panicky to it. It is exactly what opens up opportunities to realistically execute a takedown for  BJJ with a high degree of success.

The basic shuck works from a collar tie. Essentially, this is a misdirection move, one that forces your opponent to go past you. From a basic collar tie, the goal is to get your head free from their collar tie, by forcing their arm off. That is often quite hard to do directly, as opponents expect it. However, with the Shuck, you use a push-pull dynamic to create movement, and then simply guide their arm behind your head, while moving the head out of the way.

A basic wrestling setup is using the shoulder to direct their forearm upwards as you move towards the opponent, pivoting to face them at the same time. It sounds much more complicated than it is. It is basically a shoulder shrug on one side, done while you’re stepping forward and turning. Usually, given that you also have a head and arm collar tie, you help your shoulder by using the forearm fo the arm that is controlling the opponent’s triceps. It is a low effort but a very high reward move, given that the reactions you’ll get are panicked and big movements.

There’s also a variation where you can use a claw grip to set the Shuck up. It takes just a bit more time to master but is my preferred option when it comes to using the Shuck, particularly for Jiu-Jitsu. Here, you still shrug your shoulder, step forward, and pivot, but you position your arm over their elbow crease. As you go for the move, you actually grip their armpit from the top down as you perform the Shuck. This won’t just open up any takedown fro BJJ, but also direct routes to the back and/or certain submissions.

Setting Up Any Takedown For BJJ With The Shuck

Now that you have an idea of what the Shuck is, let’s see how you can use it to set up a takedown for BJJ. Regardless of which grip variation you use, the goal is the same – get past your opponent. This opens up their back, which usually has them overreacting to return to a position where they are facing you. This means they’re only thinking of getting back in front of you, and not about defending takedowns and throw. Of course, this is the best time to go for a takedown of your choosing.

If, for example, it is a double leg takedown you’re going for, having an opponent turning towards you will also have them coming forward. That really helps you remove distance as a factor in setting up your takedown, as people are going to step right in as you shoot. In wrestling, where people tend to jump like bunnies to face you or get up from the ground, the Shuck is the perfect thing to get the hopping so that you can take them down without much effort.

As far as BJJ goes, you also have the threat of the back, which makes people even more jumpy and wary when you get past their hip. And, if you don’t like standing back takes (why wouldn’t you?) there’s actually a perfect wrestling pairing for BJJ – use the Shack along with the front headlock. You can actually use the Shuck to get to the front headlock, snap someone down, and use the Shack again to get the back. The combination here is endless, and given that all you have to do is shrug the shoulder and pivot, I can’t see why we’re not teaching this to anyone that walks in the gym. I certainly intend to incorporate it a lot more once we’re back on the mats.

A big question is whether the Shuck would also work In the GI. When the grip is on the collar, it can be tougher to break it to actually manage to get to the back. However, the same move will definitely force the opponents to move and readjust, giving you an option to set up a different takedown for BJJ, like for example, the single leg. Use the Shuck and you’ll end up to the side of your opponent. The slack in the collar allows you to squat down and grab a leg, landing a single leg, or eventually getting the back from there. It is a very powerful move and the fact that not many people use it in BJJ works in your favor if you pick it up and add it to your game.