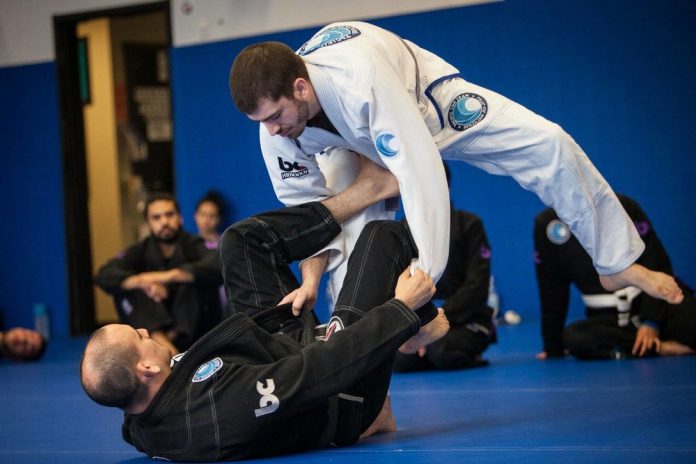 What exactly is the guard in Brazilian Jiu-Jitsu? Not many people can give you a precise definition that would refer to all the possible guard variations that exist. This is to be expected as BJJ really does have an endless supply of guards when it comes to the sport aspect of it, especially with the Gi. And still, Jiu-Jitsu is first and foremost, logical, that is why it is so effective. Conversely, if it is logical, there is systematization to it, and that must include a way to define the BJJ guard position in a way that would encompass all possible Jiu-Jitsu guards. Well, there is a definition, and that definition will further help us understand the fundamental anatomy of every possible guard.

The BJJ guard position is pretty much what made the sport/art stand out so much in the midst of all other martial arts. Fighting off the back was never really thought off as a possibility until Royce Gracie beat everyone up in the early UFCs. In the decades to follow, though, BJJ transformed into a sport, one that very much gravitates towards guard positions. So much so, in fact, that one could argue that we have an overabundance of guards that don’t’ really do us too much good at this point. So regardless if you want to play or pass the guard, you need to understand it, and that’s exactly what we’ll do today.

Contents hide
Defining the BJJ Guard Position
What Do All BJJ Guards Have In Common?
The Hook Leg
Active Leg
How To Use This Knowledge
All In All 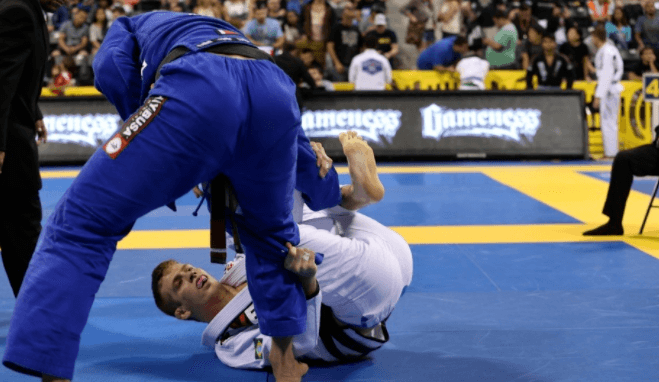 What is the most important question to answer in regard to any Jiu-Jitsu technique, concept, principle, position, or whatever else there is? It is not how things work, but rather why things work that we need to answer. And the answer is usually not easy when it comes to Jiu-Jitsu positions. In fact, the BJJ guard position is probably the one that took me the longest figure out.

The closed guard, as the initial Brazilian Jiu-Jitsu guard, is a very practical thing. You use your legs to control the inside space of an opponent’s torso. That’s not by accident. Your legs are the strongest part of your body, and allow you to manipulate the opponent any way you see fit, helped by your grips and body movement in general. That right there, the fact that you’re using your legs to manipulate someone’s body while on the ground is what actually helps us define a guard.

If we define the BJJ guard position in this manner, we can then look to figure out a common denominator that makes all guards work. In other words, we can figure out the “why” behind every Jiu-Jitsu guard. Whether you use the information to improve your guard gem, improve your passing game, or both, is entirely up to you.

What Do All BJJ Guards Have In Common?

Using the definition we came up above, we can summarize that in keeping our legs in between us and our opponent, we need to maximize effectiveness in terms of the guard with certain configurations of those legs. Leaving the closed guard to the side, for now, we’ll talk about what makes all open guard tick.

Speaking of effective guards, let’s define what that means as well. First and foremost, you need to be able to prevent people from getting past your legs. That’s the main point of playing guard in BJJ. Only when you’re certain that you’re safe, you can think about using offensive options to start and achieve one of two things – sweep the top person, or submit them.

The way things work in BJJ is that if you’re not connected to someone, you can’t hope to grapple with them. While people usually look towards grips to achieve this, legs play an even more important factor, particularly when you’re the bottom person. To that extent, you need to figure out a way to “hook” the top person with one of your legs, establishing a structure that allows you to be connected and prevents them from being able to pass. 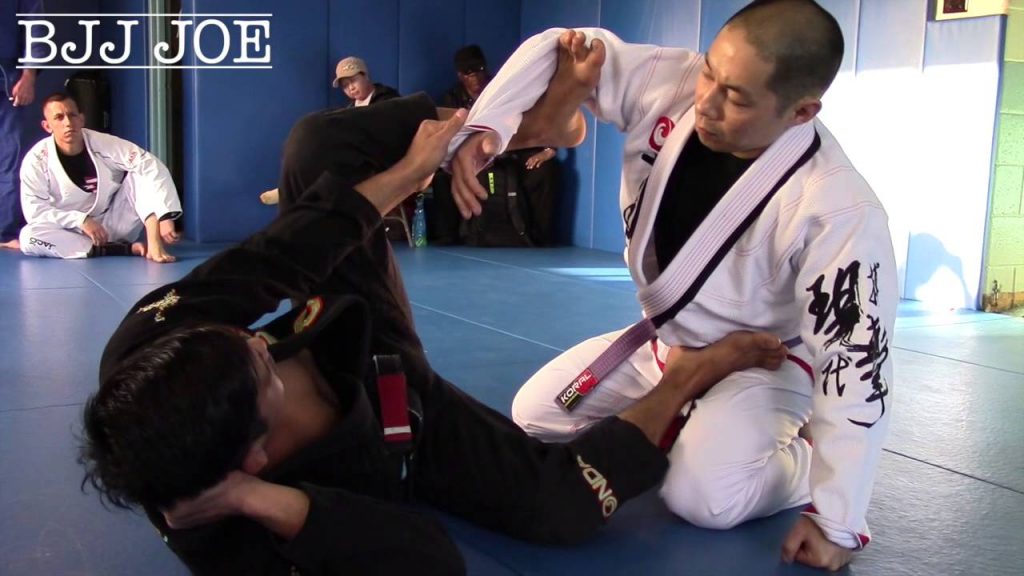 Let’s look at some examples to make everything clearer. IN the De La Riva guard, the hook leg is the most obvious – it is the one hooking their leg. You’ll notice that the hook leg is bent, thus allowing you to connect. However, keeping the leg bent also achieves something else – tit allows you to keep the knee of the leg near your chest, which helps you protect your inside space, or, in other words, prevents people from passing. It serves a dual purpose – while connecting you to the opponent it also prevents them from moving, while also covering your inside space.

On the other side of every BJJ guard position is the active leg. This is the leg that helps you reinforce the defensive tasks of the hook leg, and eventually, allows you to transition into more attacking options. Namely, this is the leg that is usually not attached to an opponent to tightly but is rather free to move around. It is the leg that helps your cause unbalances, that is a power source for all your hip escapes, that tangles arms and break grips so that you can set up your submissions. 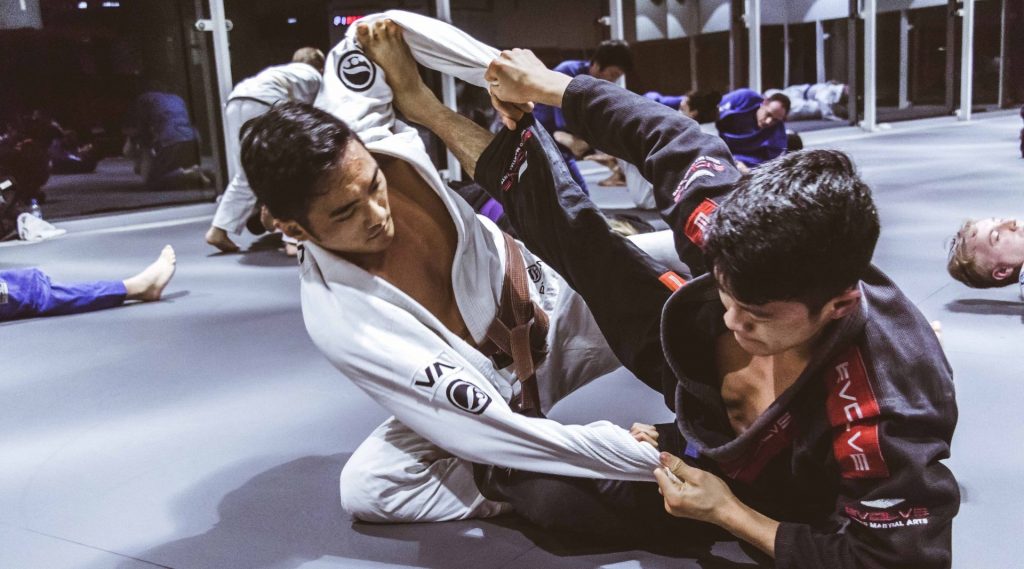 Looking at some practical examples it is the leg that goes on the hip in the De la Riva guard. That is the leg that pushes on the hip, or pushes/hinges the knee, redirects the head, deals with grips, etc. In the 50/50 guard, that would be the outside leg, the one tasked with creating motion and helping you go on the offense. Looking at the spider guard, the active leg sit he one that is extended, given that it is directly responsible for the Kuzushi that leads to sweeps, or setting up the infamous triangle chokes from the Spider guard. IN the Z-guard it is the shield, in the Single leg X, it is the leg behind the butt, etc.

How To Use This Knowledge

So, now that you know the definition of what a BJJ guard position is, and from there, you know why guards work, how can you put this to good use? Well, as a guard player, your tasks are already determined by your legs. As long as you have a hook leg, you won’t’ get passed. Since we took this as the primary goal of every guard that should be the first leg you’re looking to establish. The active leg comes next, and it is the one that will help you reinforce guard retention and transfer into attacks from the bottom.

Form a passing standpoint, you know now that you need to deal with the active leg first, in order to make sure you’re not being attacked. Figuring out a way to neutralize the active leg is what will make getting past the hook leg later on possible.

Finally, let me touch on the subject of the closed guard. While the closed guard as a position does not feature the configuration of the legs we talked about before, the fact t is that in order for you to do anything from the closed guard, you’ll need to switch to a configuration that includes both legs. Think about it: scissor sweeps, pendulum sweeps, triangles, armbars, etc – they all require you to =unlock the legs and establish a hook leg and an active leg.

The BJJ guard position was a really hard one to define. Given that the goal was to find the common characteristics shared by all guard variations it really took me a long time to figure it out. The way I presented above, though, has helped me understand each and every guard position I’ve tire to play since then. It has also helped me develop a foolproof passing formula that helps me deal with even the most annoying modern guards of today. Let me know what you think in the comments!