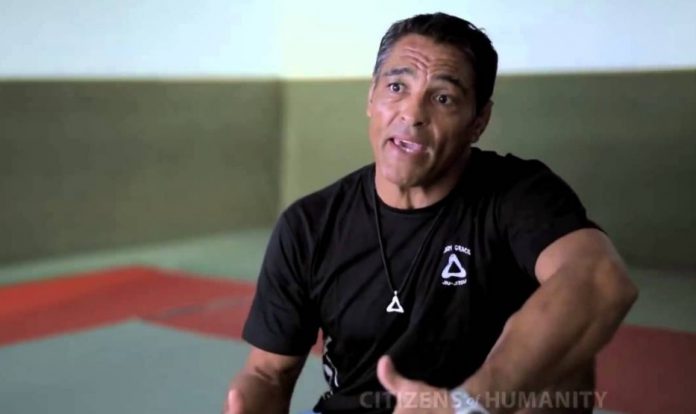 As Rickson Gracie Appeared on Chael Sonnen’s podcast he had some strong words about the current state of sports in Brazilian Jiu-Jitsu. He even calls it Anti Jiu-Jitsu.

The main thing that Rickson refers to is the point system and stalling. He calls it rampart stalling and he thinks this point system and the way fighters are fighting endangers the sport’s future.

“I see 10 fights of black belts. Nine, I feel like ‘what are they doing there? They don’t even want to fight. They want to win the match by a little advantage.”

“That’s really jeopardizing our culture. We have to bring back the idea of fighting to be the best with simple rules, dynamic action, nonstop,” Rickson said.

Rickson, also, see a problem in Jiu-Jitsu ruleset and the way referees give points.

“Today, the rules are based on interpretations. The same judge can give 2 almost identical fights different results because the interpretation is different so it’s important for us to create a set of rules. But really define who is really winning the fight and most of all hurting the growth because as a competitor in MMA, judo, or jiu-jitsu you want to minimize the risks. You want to maximize the chance to win.”

Rickson is a founder of the JJGF /Jiu-Jitsu Global Federation) and he has his own ruleset. He gave approval for his rules to be utilized on a tournament in Albany, New York.

Check out the highlights in the video below:

How All Grapplers Can Benefit From The Gracie Diet