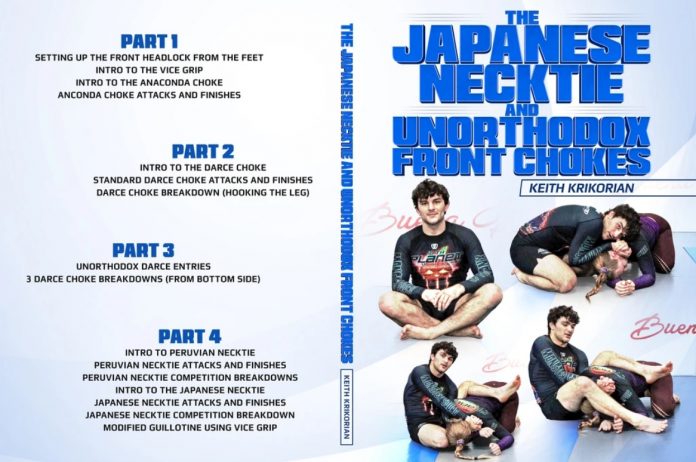 One of the best chokes in existence (according to me, anyway) is the Japanese Necktie. It is brutal, it is tight, it is nearly inescapable and it can easily turn into a crank. Plus, it is the perfect pit-stop when having fun with Darces, Anacondas, etc. So far, I only managed to come across it as part of different instructionals, but never in one dedicated solely to the submission. Luckily, Keith Krikorian stepped in to remedy this and offers us the first in-depth Japanese Necktie DVD (along with other unorthodox front chokes).

The Japanese necktie is unusual, but it is extremely effective. I have no idea why we haven’t seen more of them in competition. I guess people only think of it in relation to the Darce choke, and they avoid it because of the crank potential, which can make it illegal under certain rule sets. That’s no reason not to use the move, though, as is proven oftentimes by No-Gi grapplers, mostly those of 10th Planet Jiu-Jitsu. The move works in Gi and No-Gi, I can guarantee it and this new Keith Krikorian Japanese Necktie DVD will teach you all you need to know. 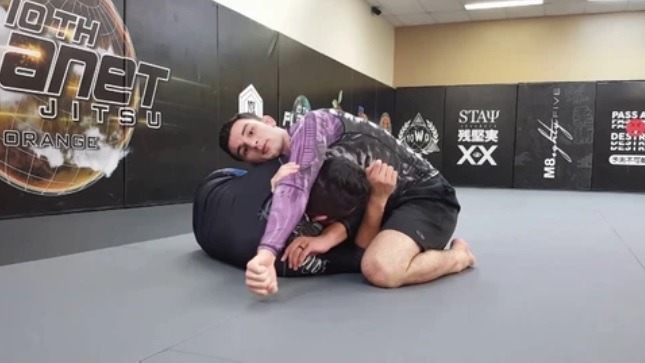 Keith Krikorian is a brown belt. As such he is one of the most exceptional grapplers to come out of 10th Planet Jiu-Jitsu. In No-Gi, he is nearly unbeatable proven by the fact the fought in ADDCC 2019 at an age of just 22. he does have a really bright future ahead of him, and I love the fact that he is issuing instructionals on his best moves as he goes.

Competing at -66kg, Krikorian entered the absolute division in ADCC. He was unfortunate to run into the eventual -66kg champion of the year Augusto Tanquinho Mendes in the first round of his weight class. he got an even bigger task going up against Buchecha in the Absolute. Still, his performances were exceptional and he definitely is one that will let an invite back to the ADCC.

On the subject of instructional, the Japanese Necktie DVD is not Keith’s first one. He already has a really cool instructional out that explains EBI overtime rounds, how to prepare for them, and how to become a master at both the attacking and defensive portions.

The Japanese necktie is usually described as the Darce choke’s next-door neighbor. It works when you can’t really pull off the grips needed for the Darce. It is also a great thing to do when people block and try to defend the Darce choke. A great thing is that you can go back to the Darce from a Japanese Necktie, forming an endless attack loop. 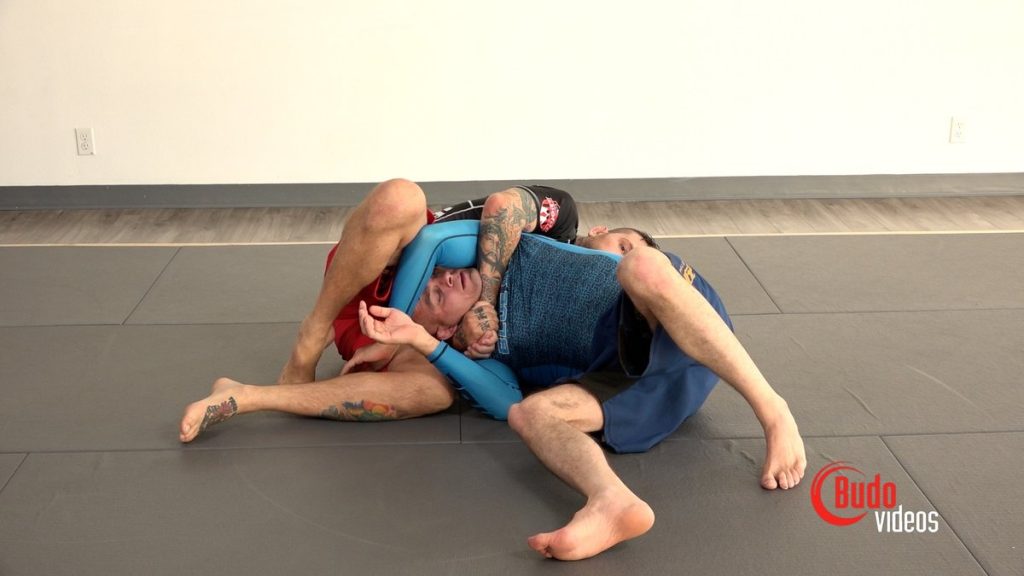 The choke works from a palm to palm or S-grip from a Darce choke position. Instead of threading one arm elbow-deep, you keep them shallow. Instead, you focus on trapping one of the opponent’s legs, preferably the top one. Once you do, the goal is to get your chest/belly behind the opponent’s head. There’s really not much to do here, as you’ll get taps just form the positioning. However, you still have space to squeeze and even pull on the leg to make the compression and neck crank much more painful and effective. The Japanese Necktie DVD by Keith Krikorian will help you learn exactly how.

Following the standard BJJ DVD format, the Japanese Necktie DVD has four volumes. They all have pars of the Japanese necktie puzzle, but there are also other unorthodox front chokes in there as well. The experience of Keith Krikorian is more than evident, and he is easy to follow and makes a lot of sense. The organization of the instructional is also not overly complicated and has a great structure. There aren’t too many chapters per volume, but each chapter is long, covering lots of material.

Opening up is an introductory portion of the front headlock. Keith Krikorian starts standing, but does offer lots of options for taking everything to the ground using the front headlock and all assorted chokes. I especially like the fact that Keith covers several front headlock grips that are essential for setting up chokes. The vice grip gets special attention in this first volume of the Japanese Necktie DVD.

There are a couple of chapters explaining the anaconda choke in the first volume as well. After a short intro, Krikorian explores several different Anaconda choke attacks and finishes.

The Darce is pretty much a Japanese Necktie, just done without involving the body. As such, it gets a lot of attention in this Keith Krikorian Japanese Necktie DVD. Keith meticulously goes over everything that makes the Darce choke tick. He starts off with the usual suspects, grips, shoulder placement, body positioning, the squeeze, etc in this portion of the instructional. He also goes into hooking the leg, which is an unusual detail for a Darce choke, but then aging, it is a DVD about unorthodox chokes. Plus, hooking the leg is what makes a world of difference in a Japanese Necktie. 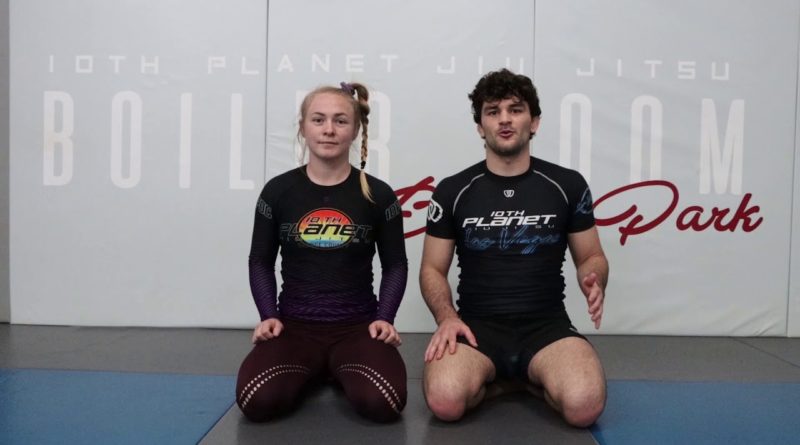 Here’s where things get really infesting. While Keith keeps covering Darces, he also goes into neckties and other unorthodox ways of finishing, still from the same position. Most of Keith’s attention here is on how to enter the Darce choke position (essential fro Darces, Anacondas, Neckties, etc.) in as many unorthodox ways as possible. As it turns out, he might just have more options than Jeff Glover, not to mention crazier ones.

Krikorian also covers Darces from the bottom, which is something I’ve really been using for years. the Ghost escape is a great example of a Darce setup from bottom side control, but there are several more as well in this part of the instructional.

Finally, the last part of the Japanese Necktie DVD is where Keith Krikorian really lifts the lid on necktie specifics. In fact, he covers not just the Japanese Necktie, but also the Peruvian, really extending your front headlock options into a different direction.

The material here involves mechanics, entries, finishes, and attack combinations for both the Peruvian and the Japanese Necktie. A really great addition are competition breakdowns, featuring great uses of both my Keith himself. Lots of modifications and details stemming from years of experience are more than evident.

The final treat is a modified guillotine that you’ll learn to finish with a vice grip.

Keith Krikorian is an interesting character that will become an even bigger name in grappling than he is now. I’m really happy that he is issuing instructionals like the Japanese Necktie DVD so early. They’ll both help him develop and polish his stuff, and everyone else discovers some areas of Jiu-Jitsu where people don’t’ really dabble that much. Unless they’re 10th Planet. of course.