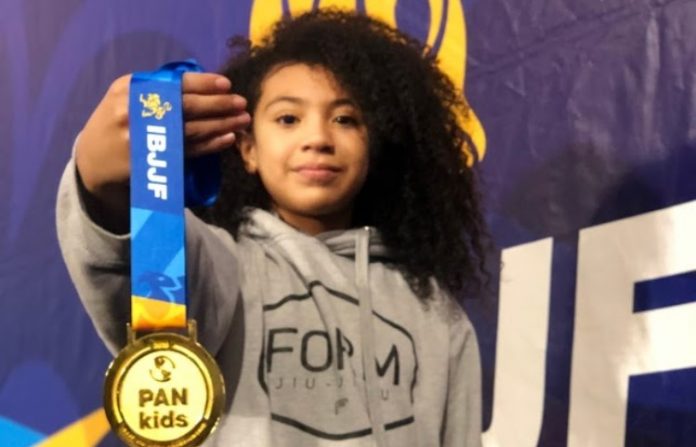 Brazilian Jiu–Jitsu is a great way to make sure kids have the confidence to stand up to bullies. It doesn’t necessarily mean that kids will immediately get into fights. It is just a way to make them braver, more confident, and able to cope with the issue of bullying that has been ever-present in our society. The example of a 10-year-old girl named London Navarro, and her story about BJJ vs. bullying is a great example of how the Gentle Art can be perfect for bullied children.

London Navarro – A Jiu–Jitsu Phenom On The Rise

London Navarro is a 10-year-old girl from Baltimore that trains Brazilian Jiu-Jitsu. Nothing extraordinary about that statement. Wait for it. London is not just a BJJ practitioner, but also a fierce competitor. She started her BJJ journey 2 years ago, and in that short time span has amounted more Jiu-Jitsu competition medals than some adults do in their entire lifetime.

London’s story starts in elementary school. Her older brother was the subject of bullying in school, something that transferred to London Navarro as she started going to school. This set off alarm bells in their mother who was desperate to find a solution. It came in the form of Brazilian Jiu–Jitsu after the mom decided her kids need to enroll in martial arts.

London did not enjoy the experience initially. She wanted out after just a couple of training sessions, claiming people were hurting her. However, after her mom inspired her by claiming London could beat the bigger people, she really took a liking to Jiu–Jitsu. A few months later London even tried her hand at competing and won her division.

Nowadays, London’s entire day is all about Jiu–Jitsu. She trains for two hours every day and commutes for 90 minutes in one direction to get to training. She even got her father into training. Suffice to say, nobody is bullying the 10-year-old now, with fellow students in her school highly respectful of her success. When it comes to BJJ vs bullying, London is the perfect example of why and how Jiu–Jitsu gets the win.

Over the years. we’ve seen plenty of examples of kids being bullied at school. The scary thing is that this is just the tip of the iceberg. There are plenty more stories of kids that we don’t know of, and most of them even scarier than the ones we do know. Bullying has been an issue in schools for decades, but it seems to be becoming increasingly more prevalent. Not only that but now it comes in a cyber from well, with all the social media platforms.

London Navarro is not the first kid to turn to Jiu-Jitsu in order to solve bullying problems. there have been plenty of examples throughout the years of kids signing up for BJJ to deal with bullies. In all of the BJJ vs. bullying situations, Jiu–Jitsu comes on top, and it has nothing to do with violence. On the contrary.

BJJ teaches kids how to move and think. Those are two forgotten skills in the modern age. Moreover, Jiu-=Jitsu provides kids with self-confidence. It has a profound psychological effect on them, changing their demeanor, their posture, the way they see themselves in the world, etc. Furthermore, it has an effect on potential bullies, as knowing that someone is competing in a combat sport is often more than enough to keep bullies away.

Even in the case of a literal BJJ vs. bulling altercation, Jiu-Jitsu provides kids with a way to cope without having to resort to violence. BJJ is all about control, and a kid can just take a pull-down and hold them until a teacher arrives, or the bully sees that they have no way out. No striking, no bruises, no trouble. It is the picture-perfect way to provide kids with all the tools they need to cope in an increasingly bully-oriented environment which we see in modern schools.

London Navarro can be considered an ambassador to the BJJ vs bullying movement. She will also be a scary BJJ competitor in the years to come if her successes so far are anything to judge by. I doubt any bully will touch her without thinking twice, despite her being outgoing, positive, and not intimidating at first glance. As I said, it is the psychological power of BJJ that deters bullies much more than the physical side of things.