Have you ever seen one of those old Chinese Kung Fu movies? The main characters often shout out their fighting style before they battle, mostly in very badly dubbed English. In most instances, it is an animal they refer to when describing their style. From drunken monkey to tiger or crane, you could hear just about everything in there. And, as funny as it may be, there’s some truth behind it. While those Kung Fu stuff are pretty much useless, there are also animal connections with most martial arts. After all, people did watch animals move and battle when developing martial arts in the first place. Or so they say. In any case, today we’ll honor the best animal grapplers that still have a lot to teach us.

Animal grapplers have been at it since the start of time. It is a part of growing up and daily life for them. Likewise, people have been copying animals since the earliest days of exploring martial arts. Well, some people, anyway. Others, like Khabib Nurmagmedov just went in there with the animals themselves (remember him wrestling a bear cub? ). In any case, up to this day we use animal drills, flows, and movements to make our selves better at BJJ. How about we study animals a bit deeper and figure out even more grappling secrets than just walking like bears or tigers?

Have you ever noticed how animals play fight when they’re little? They still do it when they grow up as well, but perhaps not as often. While we might just see it as play, it is an essential quality that helps animals develop into individuals ready to survive in the wild. A such, it is a lot of fun to watch, but there are also plenty of lessons in there for us, especially in a grappling sense. 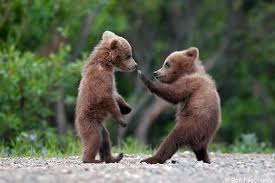 Play fighting among animals has been the subject of lots of research. While it is clear that it teaches animals, particularly predators how to be more aggressive. that is an essential skill they need in order to survive, whether they’re the hunter or prey. However, there’s another aspect to this. Animals don’t just hunt/run from other animals, they also fight among themselves. Play fighting prepares them for content. Research offers some interesting findings about male vs. female animal grapples getting involved in play fighting, and their later “success” in life compared to others.

There are also other very important benefits of play fighting. There’s a social aspect to it that we people don’t quite understand, but we definitely benefit from it. If you see BJJ as play-fighting among humans, you can see how those that do it have more interesting social skills than others. Moreover, among animals, play fighting teaches younglings about their ability to fight, giving them experience and a sense of “self-assessment”.

One really fascinating thing about animals play fighting (AKA rough-and-tumble play)  is that they take turns when doing it, almost like drilling moves. They sometimes grapple with aims, like biting the flanks and rump or conceding bottom position. This all depends on the animal species and their tendencies towards grappling play.

Speaking of animal grapplers, some area truly high-level grapplers, proficient at ground fighting throughout their lives. Some of them are just build for grappling (think anaconda or octopus), while others simply enjoy doing it (like Pandas). 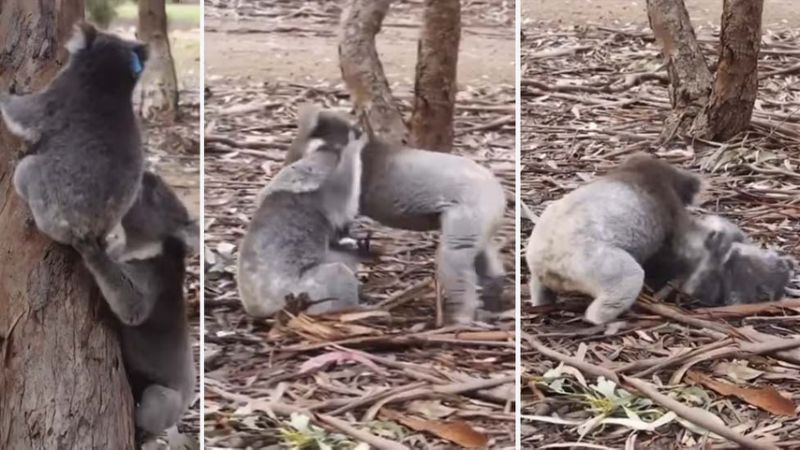 Koalas are cute and cuddly and people usually imagine them hanging of a eucalyptus tree trunk, nibbling on leaves. They’re actually quite agile and really love to play fight. They grappler a lot, and most do so standing, like wrestlers. Whenever a Koala gets to the ground with their back, they look to spring back up. Plus, they have some slick transitions and body locks.

Probably the most obvious of the bunch. Snakes and particularly giant ones like anacondas and pythons are real choke masters. The Anaconda choke is a great example of a move borrowed from animal grapplers and used in BJJ. The crushing pressure these types of snakes use is more than enough to crush and/or suffocate a human. the way n which they leave no space really does demonstrate we still have a lot of grappling to learn from the animal kingdom.

Also known as grapplers, but they’re a much more active type of grappler, compared to snakes. Often times, people compare purple/brown belts to cats. This has to do with the feather-like movement that seems to flow, with some acrobatics for added flair. Jokes aside, all cats, from the house cat to other big cats (lions, tigers, jaguars, etc.) are fearsome grapplers. There are instances of people going up against them, and not all have a happy end like this one. They back take experts, by the way, as they love to hunt their prey by biting their neck while hanging on their back.

Alligators, and to an extent, crocodiles are deadly when they get you in their proffered environment. They like to get you in water or on the shore. The tactics are to use the enormously strong jaw to latch on. From there, they do the famous gator roll to completely destroy the prey’s defenses. Now you know where the “gator roll” in BJJ got its name from, plus what it is meant to achieve. 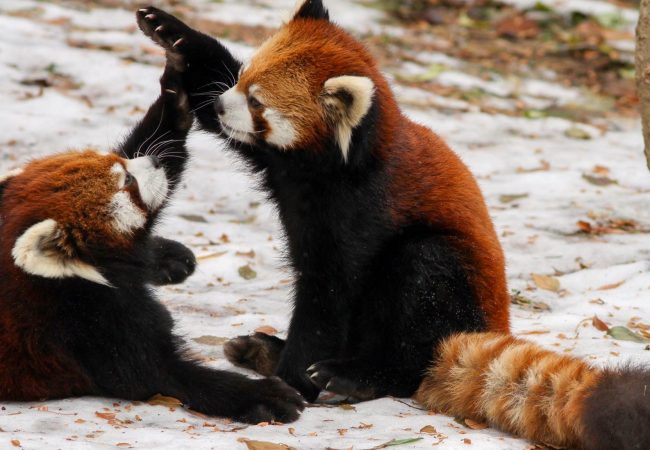 If you like escapes, then there’s no better animal to watch then panda bears. Of all the animal grapplers they might be the most unassuming, but they do move the best. Nobody can invert and flow like a panda bear. Moreover, there are red pandas which are really nature’s perfect grappler – they’re fest, slippery, masters of escape that like to grapple day and night, and have the claws to prove they’re no pushover.

Imagine if you had 8 limbs instead of 4. It would’ve been so much easier to grappler anyone. Well, octopuses are not just blessed with lots of limbs, but also with the brainpower and agility to use them when grappling. Apart from being able to completely wrap around you and block you from doing anything, they’re also hardcore when it comes to defense. You can tear away a limb (literally) and they’ll just swim away. Granted, that limb will grow back but that’s still a crazy move! I’d tap.

Apart from the technical/tactical side of things, we do have lots to learn from animals in terms of body control, movement, and flow. It is no accident that animal movements are a part of grappling, BJJ, Ginastica Natural, etc. They help us master body movement in planes of motion that we don’t usually use as humans. In Jiu-Jitsu, though, and grappling martial arts, all planes of motion are constantly being used. That happens to be one thing animal grapplers are all amazing at too.

All those bear walks, monkey drills, tiger walks, kangaroo jumps, etc we do in warm-ups are not just physical drills. they help you develop body awareness, coordination, agility, speed, focus, and much more. they’re a great way to make use more efficient at movement before we indulge in play fighting. Unfortunately, we don’t have these qualities from birth, as animal grapplers do,. But we do have the means and methods of training them and adding them to our arsenal. So, make sure you really pay attention to the animal drills in training.

Animal grapplers are fun to watch. I actually spend quite a lot of time on videos when researching the subject for this article. In fact, I’ve already seen several things I’m itching to try out on the mats as well. There’s so much to learn from animals that have been grappling for centuries before we even thought about doing stuff like BJJ.