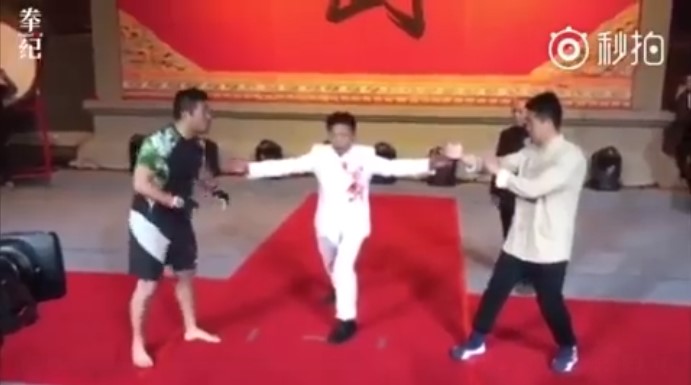 Wing Chun is a traditional Southern Chinese Kung Fu martial art. Its specialization is fighting in close range combat. Wing Chun practitioners are trying to specialize in fighting on outside of their opponent. It’s easily described as “nose to ear” and not “nose to nose” fighting.

What usually happens is that Wing Chun noses are all over the place when they challenge someone. But they don’t give up. They’re always there ready to take a beating with pride in those nice looking suits with running shoes on. Those running shoes should have some better usage in their way of fighting, but it is what it is.

I really can’t remember if I ever watched a video of some martial artist in a suit without having some superpowers. Those superpowers usually vanish when they confront someone but they’re always back when they come to their gym. Especially if they are recording some video of their fighting style proving the world the “true” power of their martial art.

In the video below we can see a real Wing Chun warrior. He spent his life training “nose to ear” martial art and he was ready to challenge or take a challenge against some random MMA fighter. Now, he probably wishes he wasn’t ready but we must give him credits for toughness and bravery, or toughness and stupidity, not sure.

The most interesting part is when the Wing Chun master goes all out on an MMA fighter. He was all over this poor MMA guy who took such a beating that he could walk, run, punch kick, and beat the crap out of Wing Chun master after he was done with his demo.

Anyway, check out the video below and have some fun.