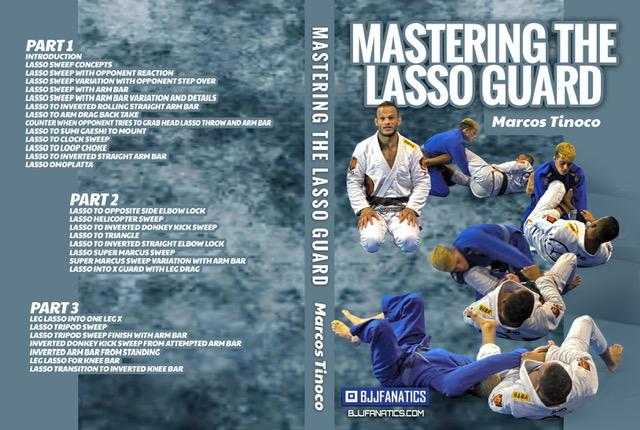 Mastering The Lasso Guard is a Marcos Tinoco DVD set that is going to make you one of the best guard players in your academy. Be warned though you’re fast going to become the person people hate, given how annoying the lasso guard is. However, if your goal is to control bigger and more experienced grapplers from the guard, and set up effortless sweeps and submissions than this shouldn’t be of any concern to you. Instead, check out our detailed review of what “Lekinho” is going to teach you in his groundbreaking instructional and the order it and get to work! Time to take your guard game to that very annoying next level! 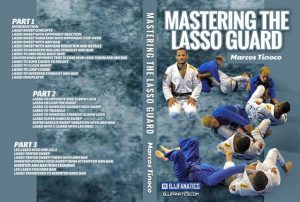 Personally, I hate the lasso guard from the bottom of my soul. In fact, I hate it so much that I avoid playing it as much as I can! However, playing it does bring some irrefutable results. It is a great guard to help you prevent people from speed passing or even pressure passing. The guard itself is not an easy one to dial in, or at least, it was.  The Marcos Tinoco DVD we have on review today has quite a different take on the lasso guard. Where everyone looks to entangle things more, Marco looks to simplify them. I got to admit, his approach to the lasso guard might even get me on the bandwagon. But that is one big “might”.

Marcos “Lekinho” Tinoco Silva is a Marcelo Garcia BJJ black belt from Rio De Janeiro, Brazil. He is one of Marcelo’s top black belts and competitors, and a member of the NYC Alliance team. Marcos is notorious for his success with armbars and the lasso guard in particular. As you’d expect, both feature heavily in the “Mastering The Lasso Guard” Marcos Tinoco DVD.

MIssing only a world title at black belt (Lekinho has one at brown belt), Tinoco has all major IBJJF accolades. The middleweight started Jiu-JItsu as a 16-year-old under the tutelage of Juarez Soares in Brazil. The team Soares led was a highly competitive one, so Marcos was into swimming in the deep from the get-go. Later on, through his future wife, he met Marcelo Garcia and started training with him.

Tinoco got his black belt in 2015 and has since conquered the Pans, Europeans, and got a bronze and silver in two consecutive Worlds. A lot more is yet to come from the 31-year-old.

Marcos put together one hell of a DVD here. To be honest, the subject matter is not one that is easy to teach via a digital instructional. Yet, Marcos has a crazy simple approach that makes complete sense. It is exactly what a position like a lasso guard requires. Basically, the more entangled the position, the simpler instructions, and movements need to be. Honestly, I’ve never seen a Marcos Tinoco DVD before this one, so I did not know what to expect. The no-nonsense instructional that is the “Mastering The Lasso Guard”, is definitely an instructional I do not regret having.

In terms of organization, Marcos uses a very simple system. There are sweeps and there are submissions from the lasso guard. In all three parts of the DVD, you get a lot of moves from both these categories. However, there’s a clear progression in terms of difficulty. marcos starts easy, and then slowly graduates to more advanced moves. Still, he manages to keep things simple even with things like the inverted donkey kick sweep from a failed armbar. This is the true mark of a real high-grade teacher. With Marcelo Garcia as his mentor, you wouldn’t expect anything less.

In volume one of the Marcos Tinoco DVD, you first get an introduction to the lasso guard. In essence, this is an open guard in which you have one leg entangled around one of the opponent’s arms, utilizing the help of the Gi to grip on. Some basic lasso guard concepts pave the way here before Lekinho goes into the attacking portion.

Techniques that merit mention (i.e. really caught my eye) are the lasso to inverted rolling armbar, the lasso Sumi Gaeshi to mount and the loop choke off the lasso, to mention just a few. Worry not, the names of the moves sound much more complicated than the techniques themselves. Moreover, these are just a fraction of more than a dozen of great moves that feature on this first volume.

In volume two, Marcos starts to explore some more advanced options. If you are a beginner, stick to the first volume until you feel comfortable with all the moves demonstrated there. If you’re into the lasso guard already, you’ll be able to grasp and execute most of the moves in |Part 2 without much difficulty.

Once again, the recipe is sweeps, submissions, or sweeps that lead into submissions. Stuff like the helicopter sweep makes its way here. I never really fancied the move previously, but form the lasso, it makes a lot of sense. The opposite side elbow lock is also a simple move that’s going t catch lots of people by surprise. It a blitz submissions that might come in really useful. Haven’t gotten to giving it a try yet, though.

In this portion of the Marcos Tinoco DVD, you also get to learn some of his specials. The Super Marcos sweep ins one such example. More armbars and sweeps follow, along with a triangle to freshen things up. The transition into X guard and subsequent leg drag after the sweep is also a very good sequence to have in your arsenal.

The final portion has a total of 7 chapters, each looking into options out of the lasso guard. here, Marcos covers a lot of transitions to the X-guard and its variations. Once again, Tinoco follows the same principles of using either a sweep or armbar or both, to get what he wants. Most of the submissions here are armbar variations, apart from a really hefty knee bar setup that I tried and fell in love with. It is one move from this DVD that I’m going to be trying a lot in the following weeks.

The sweeps here tend to go in different directions, allowing you a lot of variations. There’s a tripod sweep, for example, along with a donkey kick sweep. Both work from the same setup and both can also contain the threat of an armbar or kneebar. The best part is that even if you fail a submission, Marcos has a way back into a seep and vice versa. This makes every chapter in this last volume a sort of an endless loop of attacks in which you can keep your opponent until you finish them.

It is always great when you can use one defensively sound position to launch a myriad of attacks. The lasso guard is such a position, allowing you to attack indefinitely and with lots of variety without ever changing the initial starting position. Moreover, this Marcos Tinoco DVD simplifies everything, from holding and positioning to executing even the most complex multi-stage attacks.