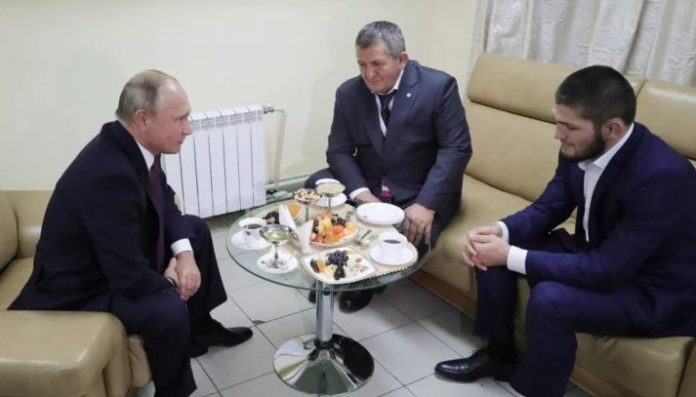 Putin congratulated the undefeated UFC lightweight champion on his win adding that he’s proud of him. He described Khabib’s victory over Conor McGregor “worthy and convincing”.

Together with Khabib was his father Abdulmanap Nurmagomedov and Putin asked Khabib’s father not to punish his son “too strictly” for the scenes which followed after the fight when Nurmagomedov leaped on Mcgregor’s Grappling coach and BJJ star Dillon Danis.

“My father teaches me, you have to be always respectful. I know my father is going to smash me when I go home.”
said Khabib Nurmagomedov at the post-fight press conference.

Abdulmanap confirmed to Putin that punishment was coming:

“I will impose a punishment tougher than the UFC’s. I warned him. For me, discipline comes first. You do whatever you want in the Octagon, [but] outside — this is the border of civilians, where there are children, women, strangers.”