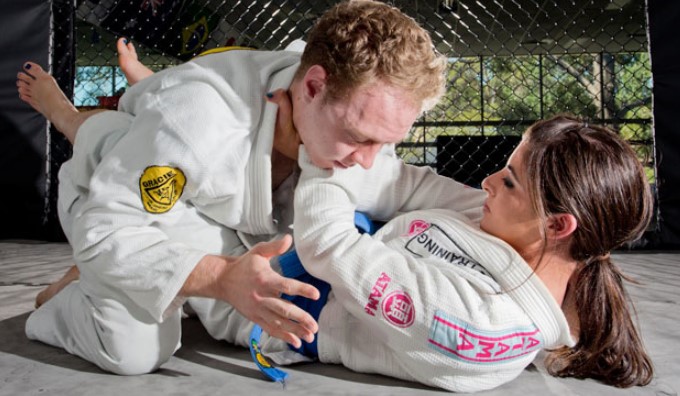 So, if you’re a man how do you roll with a woman? How do you do that? There are many cases where someone is being inappropriate with women in the gym. You can read about an inappropriate instructor who was hitting on his student in THIS ARTICLE

Chewy from Chewyjitsu has being asked questions from both women and men about this problem and here is what he said:

One was a woman who was training at the gym and she had a great time and she was put into a choke which is no big deal. Just a choke, no big deal. But the man choking her was whispering in her ear sexual stuff which obviously upset her and made her feel really irritated. She spoke to the coach and the coach did not reprimand the man and he didn’t even go to ask them both. He didn’t say let’s step out of the mat and we’ll figure this all out. Instead, he shamed her and he sent her home. She was really upset, wondering is this normal for you? What should I do? It’s not normal. Go to another gym. Just check some other gyms out.

There was another situation where this woman, who was a blue belt. She was at the gym and she was training and her biggest problem was she couldn’t get the rolling partner. All the upper belt guys didn’t want to roll with her. So, she eventually gets one of the guys but some upper belt came and steals her partner.

She was so frustrated she is like, “I want to quit this gym and leave”. She was asking her self why won’t anybody train with me. She was saying that people don’t like to train with her because they think it’s the waste of time.

First off, how do you roll with women? Well, you just take it down a little bit. Although there are exceptions to this rule. I had some women coming to the gym that were rowdy. They leave guys with broken and busted noses and stuff like that. So, you have some really tough gritty guys and you got very soft men. And you got pretty tough, gritty, strong women and you got some softer, more feminine woman. It’s just the way it is. There’s always a spectrum. But, in most cases, you find that when you roll with a woman you take it down a little bit. As a man who’s like 200+ pounds, I don’t put my full pressure woman. I don’t use my full strength. A lot of times when I try to do is see if I can engage in a smooth roll and exchange as much technique as possible. Just pure fluid technique.

Now, some you guys out there think, I’m not gonna waste my time cause i’m not getting a really hard roll. You’re mistaken because if you train like this it’s really beneficial because you’re basically doing the technique in a fluid motion. Then, when you with the guys where you have to use more strength, you got that muscle behind the technique and it’s so much more crisp of the technique.

There are many women in this gym that if I bring new guys off the street and they roll with them women is gonna beat them. But, what I’m talking about is mainly where you’re even with the woman who may be of equal skill level or maybe your little bit better and you’re just much bigger, sometimes, you just need to take it down a little bit.

I’m saying this because it’s really important for us as a man in a male-dominated sport to bring women in and give them a safe comfortable environment to train. Because, this stuff can be incredibly empowering for men, but also for women. There are all the stories of women who used Jiu-Jitsu to stand up for themselves and defend themselves in really bad situations. That’s awesome, that’s so fantastic. But they can’t do that if they don’t get welcomed into the group and if they’re not able to train in a safe environment.

You got a bunch of knuckleheads who try to slam women and drag her forearm to the neck. These guys are 200+ pounds over the 120-pound woman and that’s not safe and that woman will not stick around and that sucks. That sucks because that woman might need that Jiu Jitsu to stand up for herself or defend herself in a situation down the road.

We’ve been doing women only class and you get to see women in their own little setting, and then you really realize it’s super important for them to feel safe and in the safe environment.