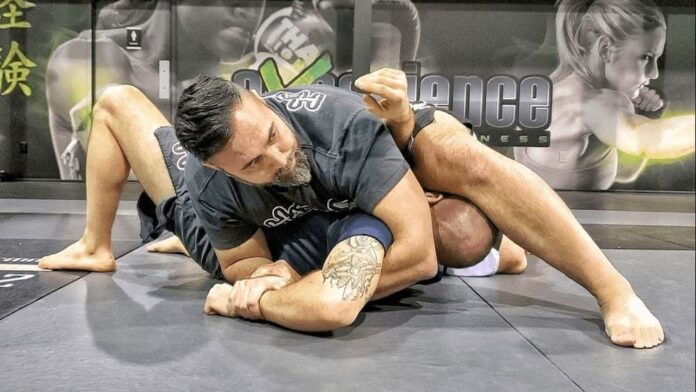 How many times have you tapped to a Kimura lock in BJJ? I have done so more times than I can count. In fact, to this day, I still do not enjoy having to defend and escape that particular submission hold, given how much versatility it offers, especially to experienced and creative grapplers. Defending the Kimura submission is not easy though, not at all. It takes both an understanding of the move’s mechanics and the directions in which people can take it when they catch it against you. That, however, does not mean that you don’t have ways out. Quite the contrary.

The Kimura si s staple submission in Brazilian Jiu-Jitsu, and for a good reason – it works like a charm. While Marcelo Garcia is famous for claiming the Kimura submission is a strong man’s move, most people tend to disagree, I included. The sheer versatility of the Kimura along with the fundamental mechanics means the move is a highly reliable one regardless of the size or experience of the opponent. The tricky part, as always is setting everything up correctly, which is exactly what most of the efficient KImrua defenses we’ll look at today are based upon.

The Kimura – Know The Dangers!

What is the main threat of the Kimura? Your shoulder might get severely dislocated. That is not something to glance over easily, as it may turn out to be a very debilitating injury, sometimes requiring surgery and significant time out to fix. So, in short, whenever you’re defending this submission, be aware of the point of no return and the fact that the tap is your way out unscathed.

That said, the power of the Kimura submission lies in the mechanics of the position that comes right before refinishing, as well as the direction of the force during the finish itself. These are two big things to be concerned about and are the staple of any successful defense against Kimuras.

In terms of the position, the configuration of figure four the grip means the opponent has immense control over your elbow by controlling the entire lever that leads up to – your forearm. In most cases, whoever is attacking also has some pressure on the neck, whether it is direct (legs in side control) or indirect (broken posture in closed guard). The bottom line is, the Kimura offers control over the two neighboring joints (elbow and neck) in relation to the one being attacked with the submission.

In terms of the power of the finish, the submission uses a rotational application of force via a bent lever to multiple the force that takes the shoulder in a direction it is not anatomically intended to go to. To apply such force, though, the person doing the submission must have a very specific structure and positioning, which are both spots to targeted when mounting high-percentage defenses and counters.

4 Kimura Submission Defenses You Can Rely On

Let’s take a look at four solutions for the Kimura that you can actually rely upon. While the armlock might come from pretty much everywhere, those that know what they’re doing will try and get it from the half guard (top and bottom), closed guard (bottom), and side control (top). There is also the dreaded Kimura trap system that opens up a whole new can of worms. The defenses that follow address all of these situations.

It would be awesome if you could prevent the bottom person from ever setting a Kimura submission up by not allowing your hands to reach the floor, This, however, does not guarantee that they can’t get the submission, so you have to have an effective defensive strategy at hand.

The goal when they get the actual grip is to prevent them from ever getting a sharp angle in your elbow and aligning their head with both your shoulder and the elbow of the arm they’re attacking. This calls for an early defense in which you thread your palm towards your belly the moment they slap on the figure four grip. Immediately go for a grip with your other arm, to secure everything in place, and try to pull your elbow inside. This will radically change the angle of their attack and force them to let go before they even get a chance to think about finishing the move.

From the bottom of North-South, dealing with a Kimura requires patience and precise timing above anything else. The biggest problem is that your arm that is under threat is on the top with lots of space to move into, and the person controlling you is pretty much sitting on your head. That man that you want to return the control over one of the two neighboring joints as soon as possible, and in this case, that is the head. Before you do, though, you’ll need to grip your arms together or hide the arm under attack by protecting it with your top thigh.

Getting out will require you to spin out so that your head is no longer under the control of the opponent. this leads to a position that might open up armbar attacks for the other person, but only if you don’t put your elbow on the ground immediately. Luckily, that requires no longer than a fraction of a second, and you can rest assured that the Kimura is no longer a threat.

This one qualifies as a quick fix, but it will also be the one you turn to most of the time. The grip break means you’re addressing the control people have over your elbow, and that’s on the opposite side of the spectrum of releasing your head. The concept is simple – as soon as they have the figure four grip in place, use your free arm to wedge your fingers underneath the thumb of the hand that is holding your wrist. There is a hole there which you can exploit and it is easy to pry that grip ope and extend your arm. getting out from there is easy and can be done in several different directions.

The Kimura trap means that the opponent has you in a situation where they can use the grip to set up a myriad of attacks, from armbars to cheeks from the back and crucifix. In order to nullify all that you have to change the angle at which the top person is controlling you before you completely strip the grip off. To achieve this all you need to do is walk your feet towards the opponent’s head in an aggressive manner. At the same time, you should aim to put your elbow on the ground, effectively killing the kimura trap. From there you could look to grip a kimura grip of your own in order to completely set yourself free, to go for the grip break discussed previously.

When we’re talking about defending anything in BJJ, whether it is a submission or a position, there are two directions to head to. One is an escape from the position altogether. The other is going straight into a counter submission or very dominant position of your own. Counters are much more difficult and need a lot more precision, but they are worth it more when you get to pull them off. In terms of Kimura submission counters, there are two that are really worth exploring.

One is the Kumura counter to a Kimura, when an opponent is trying to get the lock from the bottom half guard. As they go for your arm and establish the grip, you want to connect your hands and get your elbows to your ribs. From there, your goal is to posture up, spine straight, Pulling your arms to your chest (like for a guillotine)_ will actually trap their arm in a Kimura-like position and often get you a tap right then and there.

Another highly reliable counter to the Kimura is turning it into an armbar attack for yourself. Form the top half guard, all you need to do when an opponent is going for a Kimura submission is to spin over their top arm, landing in a position to hit an armbar yourself. The same move can work when they’re going for a top side control Kimura and you spin under cathing them in an armbar that is available because of their grips.

Defending the Kimura submission is not an easy task. There are plenty of positions that open up different variations of the hold, and it is impossible to be ready for each of them specifically, Defending by escaping the control and killing the power of the move is an efficient way of setting up your defense. Well, that and gong for high-percentage counters.