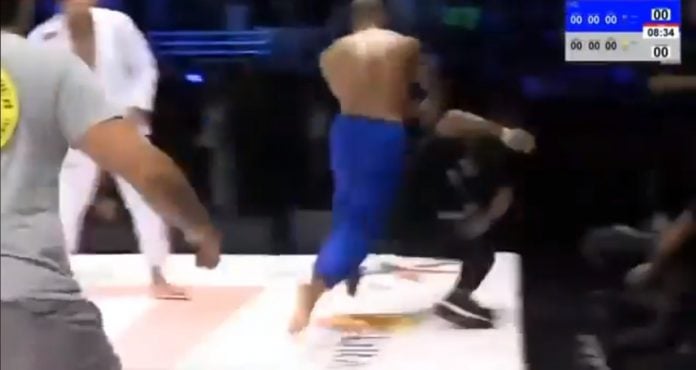 Who said BJJ GI matches were boring to watch? A meeting between Erberth Santos and Felipe Pena was never going to be dull, but what happened is something nobody expected. In short, Santos seemed to emulate Khabib Nurmagomedov quite well in jumping off the mat and attacking his opponent’s corner. the only difference here, Santos didn’t do it after winning the match. But he also hadn’t lost it up to that point. The unwanted spectacle that then followed was all-out chaos at the BJJ Stars event In Sao Paolo, Brazil. The Erberth Santos brawl ended up spilling into the crowd and derailed a great event, blemishing the name of BJ Jas a sport in the process.

While we all want excitement from black belt BJJ matches, nobody likes to see a brawl take place on the mats. Thankfully, these types of incidents do not happen often in our sport, compared to others. Still, they do happen, and the arguably worst one took place last Saturday. A much anticipated high-level Gi encounter between two esteemed heavyweights in Erberth Santos and Felipe “Preguiça” Pena. The outcome didn’t exactly turn out as expected with the match going Pena’s way by DQ. However, the thing that led to the DQ in the first place was an Erberth Santos brawl that somehow focused on Pena’s corner rather than Pena himself. Here’s what happened:

We were all expecting a 10 minute fast paced action match under BJJ Stars rules. Multiple time IBJJF champion Santos and IBJJF and ADCC Champion Felipe Pena were a dream matchup for BJJ fans across the globe. This means that the whole community’s eyes were on the action in Sao Paolo as it happened. What ended up happening was not what most people tuned in for.

The match began quickly, with Santos going for a foot sweep that ended up in Pena slipping. Pena then went for a guard pull, ending up in closed guard. The referee moved the action to the middle of the mat, which is when Santos stood up forcing Pena into a De La Riva, and ultimately, a single leg x guard. When Pena scored a sweep from the position Santos complained of a knee injury. The referee stopped the bout to get the doctor on the mats. This is when things took a turn.

As the doctor worked on Santos, the IBJJF champion was arguing with someone off the mats. Seconds later, Santos jumped to his feet and off stage, storming into the crowd that was matside. The Erberth Santos brawl happened only 2 minutes and 26 seconds into the match.

What we saw happening, without many contexts, was Santos rushing someone off the mats. Other people quickly followed and there was a “standstill”. At this point, it became clear that Erberth attacked a member of Pena’s corner. The members of Pena’s team were surprised as well, and people intervened to pull Santos from the man he went after. However, Erberth had more on his mind, rushing across the mats and engaging another Pena team member on the mats. They both went tumbling of the mat and the brawl took a turn for the worse.

At this point, a large commotion followed where people from what appeared to be both teams joined in. The brawl went on for several moments, with some people receiving kicks while on the ground. At this point, Pena also joined the commotion. When the dust settled, a few people were escorted down the tunnel. Some of them were from Pena’s team, and Santos was nowhere to be seen, presumably escorted out.

We learned later that Santos initially reacted to provocations from Fernando Pena, Felipe Pena’s brother. According to reports, Fernando taunted Santos about faking the injury because it ended up in a sweep for Pena. After the short standstill, the second subject of Erberth’s rage was another Pena student in Servio Junqueira. This is where things got out of control. People surged in, throwing kicks at both Santos and Junqueira who were on the ground. The Erberth Santos brawl included a host of people at this point, including a visibly angry Felipe Pena.

As people went down the tunnel, BJJ Stars promoter Fernando Lopes took to the stage to calm things down. The match ended up with Pena as the winner via DQ.

Things are still fresh and reactions are coming in from both the community and officials. As per Fernando Lopes, Santos is never going to compete under the BJJ Stars banner ever again. “I’m a black belt for 21 years, and an athlete has to be a black belt on and off the mat to deserve a black belt on my team. I wouldn’t give a blue belt to an irresponsible man who fights in the street”, Lopez told MMAFighting.com. On social media, BJJ stars also issued a statement reading: “First of all, we would like to apologize to all those who witnessed the end of the event that took place on February 23rd. We do not cope with any kind of physical aggression, jiu-jitsu is, above all”.

Felipe Pena himself reacted on social media, claiming: ”It’s a shame what happened, despite the victory I’m sad with today. I got ready and I dedicated a lot to give a show for you and unfortunately ended unexpectedly! Sport is not that.”

The now infamous Erberth Santos brawl pulled attention from what was a really entertaining grappling card. The stacked card including names like Buchecha, Lo, Megaton, and Marco Barbosa among others. Matches that took place before the Santos vs. Pena debacle were actually really good, with a lot of unexpected outcomes. These are the main card results:

We will keep this article updated with anything interesting related to this BJJ Stars event.

Gordon Ryan posted a comment on his Instagram profile about Erbherth Santos. As Gordon sees it Erberth is faking injuries and doing something to get himself out of match every time he’s losing. True or…?

“So let’s get this straight. You literally quit every match that doesn’t go your way. You tap to mount, tap to fake leg locks, tap to sweeps. You’re the softest “gangster” I’ve ever seen. How are you gonna say your knee is “hurt” then proceed to spring to your feet and launch into a full sprint off the stage to fight someone to get yourself out of yet another match you had no chance of winning. I know soccer is big in Brazil but you must have forgotten this is a combat sport. You cant fall over crying every time someone touches you. This is the softest most unprofessional shit I’ve ever seen bahahaha. Stick to chasing chickens back on the farm my child and never come @ me again because you’re not even worth my time.”

So lets get this straight. You literally quit every match that doesnt go your way. You tap to mount, tap to fake leg locks, tap to sweeps. Youre the softest "gangster" ive ever seen. How are you gonna say your knee is "hurt" then proceed to spring to your feet and launch into a full sprint off the stage to fight someone to get yourself out of yet another match you had no chance of winning. I know soccer is big in brazil but you must have forgotten this is a combat sport. You cant fall over crying everytime someone touches you. This is the softest most unprofessional shit ive ever seen bahahaha. Stick to chasing chickens back on the farm my child and never come @ me again because youre not even worth my time. ??

“Talk to people, Today I came to talk a little of what really happened this last Sunday. As soon as I arrived at the event, I started the offenses, I left and I continued entering the gym, I arrived with my students, we talked and then went down the stands to be next to my teacher (Guigo), we were watching the fights right there. We both went up in the food court to take pictures with the fans, to talk to the crowd, the moment I was taking a picture with the guys I got a punch from behind the rib, it was too full I could not see who it was. I went down to the fighting area to concentrate, but every time I passed members of other teams offending me and making gestures towards me, this was happening until the beginning of the fight. We started the fight, and after a few minutes I injured myself and asked to stop the fight to see what had happened, called the doctors, until then blz … At that very moment they started calling me “monkey”; “offended”, “marginal”, very prejudiced offenses, the offenses not only remained with me, they cursed my mother who was not even in that moment until my teacher was offended, after that I ran up to the boy who was cursing everyone, when I got close to him, he apologized and I stopped, I was good, out of nowhere an opponent team face punched me in the face and ran out, behind him on the mat, falls on the other side, all my opponent’s students hit me with punches and tiptoes, until my OPPONENT came down from the mat to kick me, he hit a kick in my face and one in my belly, after that my team pulled me out. I know my attitude was totally wrong, but in the heat of the moment, I could not resist. At that moment a person I do not even know was cursing people that I LOVE on my side, it was not through the internet or social networks, it all happened less than a meter and a half, no one would take it. This text was just a preview of my statement, I’m going to make a video talking about everything that happened, how I felt at that moment and how I am today. -wrote Erberth Santos on his INSTAGRAM Profile“