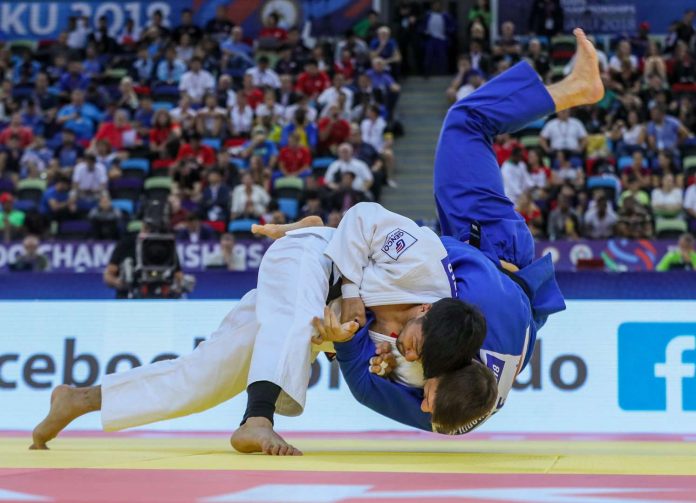 Back when I was a white belt, I witnessed something at a competition that made me really value modified Judo throws for BJJ. A blue belt teammate of mine went up against a seemingly unassuming competitor. The moment this kid got his hands on my teammate, he went flying up and down, like he was being manhandled by the Hulk himself. The BJJ throw that inevitably followed had my friend crash landing on his head. Needless to say, the match didn’t go his way. The moment I saw that BJJ throw, I knew I had to have it in my arsenal. So I researched it and found very little. Actually, there’s not much info on it to this day, but experience and learning form lot of great Judokas has had an impact. Today, we’ll be talking about the unstoppable trainwreck BJJ throw.

The kid that my teammate faced that day was no other than a blue belt River Dillon. Little that we know that the Trainwreck is his signature move, one that has claimed a lot of matches since. The Trainwreck is actually a modified Judo throw that some of the very best BJJ competitors like to use. Examples include Rodolfo Vieira, Alain Pozo, and Tim Spriggs. it is this last one, though, Tim Spriggs that took the Trainwreck BJJ throw to a whole different level.

Looking to become a takedown machine? Look no further than “The Takedown Blueprint” DVD set. it features Judo legend Jimmy Pedro along with BJJ and Judo black belt and Olympian Travis Stevens. Exactly the pair you want teaching you how to send people flying!

The Trainwreck BJJ throw is actually nothing new. It is just a very cool variation on an old Judo classic, that fits the needs of Jiu-Jitsu more than those of Judo. Today, people that really know how to hit this move are reaping the benefits of it at all competition stages across the world.

The origins of this throw lie in the Eri Seoi Nage Judo throw. The Eri Seoi Nage is done by controlling an opponents sleeve and collar on the same side. For it, you’re using a cross collar grip and a same side sleeve grip. The goal is to place the elbow of the collar grip arm under the opponent’s armpit as you enter into a throwing position. The other arm stays high, guiding the opponent over your hip as you get into position. From there, you finish like any other hip throw.

The Trainwreck BJJ throw has the same starting position. Actually, the grips are identical to the Eri Seoi Nage. The execution, however, is where the Trainwreck shines. Instead of taking the opponent over your hip, thus exposing the back, the Trainwreck offers a different route. it actually takes the opponent sideways and slams them to the ground much more effectively.

Tim Spriggs is one of the best, if not the absolute best, at using the trainwreck BJJ throw in competition. He sends people flailing around before they come crashing down to the mats, unaware of where they are. The best thing about this takedown is that it’s fairly easy to learn and can work for everyone.

The key components, as with any other takedown, are the grips. The goal is to get to the preferred grip position first and keep your opponent from getting in grips of their own. If they do, you’ll need to focus on breaking them before you proceed with the throw. The cross collar grip needs to go in with four fingers in, at the level of the collarbone. For extra pain, make sure your knuckles are right up against the collarbone. The sleeve grip goes with four fingers in a pocket, a low as possible towards the wrist.

The Trainwreck BJJ throw has two distinct motions with the arms that can make or break the move. The collar gripping arm is the more complicated of the two. You actually need the lapel to finish this throw and this arm is crucial. You want to take your grip towards the shoulder in a circular fashion. First you go up then you go towards the shoulder, and finally, you take the grip down. This is going to both break the opponent’s posture and initialize the throw.

As with the upper body, the lower body positioning also plays a huge role line the effectiveness of the Trainwreck BJJ throw. In fact, the legs are the power source behind the throw. The drive behind this throw is in the leg positioning and how you collapse your legs, rather than how you push with them.

Let’s go over everything in detail. The leg that is further from the opponent is going to stay with the foot on the mat at all times. All you need to do is bend this leg, with the knee pointing outwards. The direction of the knee needs to be the same as the direction of the throw itself.

The other leg is the crucial leg in this throw. It is the leg that is closer to your opponent. As you do both arm motions at the same time, this leg needs to go down on its knee, again, pointing outward. The two arm motions and this leg motion need to be as close to each other as possible in order to get an effective throw.

In setting up the move, it is important to understand that you can’t the trainwreck BJJ throw from a static standing position. You’ll need to rattle your opponent first and get them into position for the throw. The best way to do this is to employ a pull-push-pull movement in a repetitive manner. In order to make it clear, it is like snapping a towel up and down. This is going to completely take away the opponent’s posture and make them focus on regaining it.

At this exact moment, you’ll threaten the opponent with a foot sweep. This further offsets their balance and compromises their position. The foot sweep of choice here is a Ko Uchi Gari. In order to be effective, you really have to go for it. In some cases, you’ll even get it which means you get an even easier takedown. However, when your opponent defends it by taking their leg back, you’re all set for the Trainwreck. As they place their foot down, go for the arm motions, followed immediately by the front leg’s knee drop.

The position that the opponent ends up in is a really great one for you. Keeping the grips is imperative as you now end up with the option to hit an armbar straight away. Getting the submission is not going to be hard at all, given that your opponent is still going to be confused from the throw.