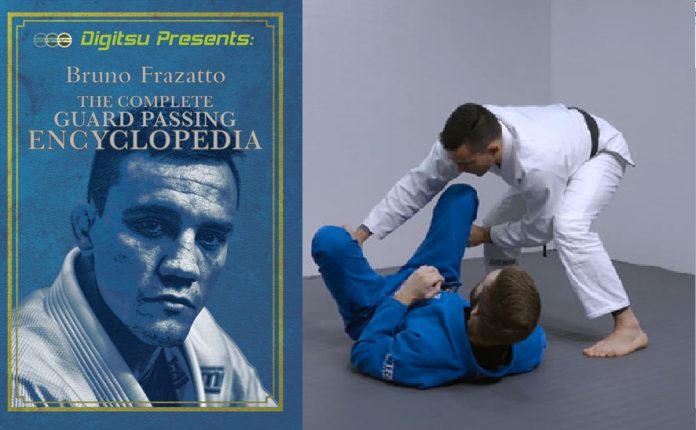 A small guy in a Gi teaching giant-killer moves. What is the first thing that pops into your mind when you read this? For many in the BJJ community, it’ll probably be Bruno Frazatto. While the little magician is ultra famous for his open guard game, he also has a few more tricks up his Gi sleeves. One of them is the Complete Guard Passing Encyclopedia. This is a Bruno Frazatto DVD that raises the bar of passing instructionals incredibly high. And we have the most in-depth review done on this instructional so far!

As a smaller framed grappler, I can attest that one of the most difficult tasks to achieve is actually passing someone’s guard. Yeah, being stuck on the bottom under a 100+ lbs heavier person is not fun. But trying to pass a lankier opponent (read: almost every opponent or training partner) can actually be exceedingly frustrating. Luckily, one of the toughest and meanest featherweight black belts out there, Bruno Frazatto ahs decided to ease this particular struggle us little guys have. The Bruno Frazatto DVD “Complete Guard Passing Encyclopedia “ is an instructional the will make you a better guard passer. However, it won’t just teach you different passes. It’ll teach you how to pass against the strongest and biggest grapplers without having to spend all your energy in the process.

Known as a pretty private person, Frazatto is an Atos team member (at the moment) who has an incredibly technical game. Given his team affiliation, there’s no need to point out that he is an avid competitor. The Brazilian born champion was born in 18984 in Campana. He started grappling at 16 and proved to be a tough competitor from the early beginnings.

After a great competition run, particularly in the 2005 Mundials where he got bronze, he got promoted to black belt by his coach, the legendary Roberto Godoi. Since then, Frazato has gone on to win the Brazilian Nationals several times, the Pans, the Europeans, the Worlds, and ADCC trials. In other words, he has a championship title in each of the toughest, most prestigious competitions in the world of BJJ. 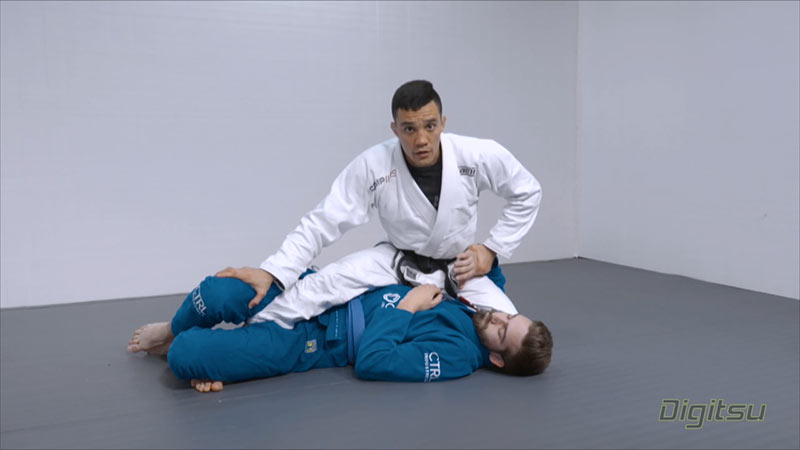 Before becoming a part of the Atos team, Frazatto was competing under the banner of Godoi for quite a while. He even dabbled in MMA a bit, winning a pro fight on his debut. However, he decided Gi BJJ is going to be his sole focus in 2008 and he made a switch to Brazilian Top team. At the same time, he also trained at the Brasa academy in Rio Claro. Since 2013, Frazatto has been focusing solely on MMA, putting his BJJ career on hold.

However, he has been more than active when it comes to BJJ instructional. Famous for his guard, he has several titles explaining his bottom system. However, it is the Complete Guard Passing Encyclopedia Bruno Frazatto DVD that’s the standout in his collection.

The Complete Guard passing Encyclopedia Bruno Frazatto DVD is one of the best organized passing DVDs in the world. Bruno’s level of technical skills is incredible, to say the least. Moreover, he is a proven competitor in both Gi, NO-Gi, and MMA. That means he has a wealth of experience that not many others can rep[licate. Not to mention that he has been a high-level black belt for nearly 15 years.

The instructional contains almost 50 different chapters, all fo them focusing on one task only – getting past your opponent’s legs. As far as approaches go, this Bruno Fraatto DVD is actually the perfect blend of different ones. Here, you’ll find both ways of passing the specific guards as well as how to use certain passes against all the different guards you’ll encounter. It is a system like no other, that goes over literally all possible guard variations. The closed, half and deep half guard are first, with some crazy detailed Torreando pass stuff following closely. A spider guard passing masterclass comes next before Bruno shares the ultimate blueprint for dealing with every De La Riva guard variation out there. Technically speaking, the sound is perfect and camera work is flawless. Bruno himself talks very clearly, and his teaching style is a detailed and patient one.

Closed Guard And Half Guard

Opening the account is some key advice on how to act when you’re stuck in the closed guard. Bruno likes to use only the most effective sequences to pass specific guards. In the case of the closed guard, what you’ll find in this Bruno Frazatto DVD is a journey into the world of the stack pass. According to Frazatto, the best way of dealing with the closed guard is stacking someone up. To that extent, he uses different methods of achieving his goal. Some of them include the long step, knee slide, double under, over-under and duck pass. You can find integral information on all in the first part of the Complete Guard Passing Encyclopedia.

While on the subject of closed guard,s Bruno also covers the half guard as well. While his take on using the back step pass to neutralize the half guard is game-changing, it is his deep half solutions that are the real star. Good deep half guard players can make your life a living hell if you do not have a way of preventing them. Bruno’s take on it is to step over. In similar fashion to before, once he knows the direction he’s heading, he uses different passes to achieve his goal. IN the deep half guard passing section, those are the slide pass, step over and the Leozinho back take.

The reason why I’m going to claim this is the best ever Torreando instructional is that it is a part of a complete system her. Instead of only teaching the Torreando pass, Frazatto covers ist as part of his entire system, giving it a much more precise perspective.

In this portion, he starts with executing the Torreando against a guard pull. For all you Gi competitors out there, particularly lighter weight ones, this is going to be huge. That said, the long step follow-up to a Torreando vs. guard pull is no less impressive if you ask me. Following suit is a different concept based on the Torreando – the throw by. Here it’s all about leg drags, and a bunch of different grips to make them ultra-effective. Something to keep an eye out for is the “drive the truck” pass, which is a Bruno Frazatto special.

Also featuring in this portion of the Bruno Frazatto DVD are a couple of easy butterfly guard passes, again based on the long step.

When I picked the Complete Guard Passing Encyclopedia instructional up this was the portion I was particularly looking forward to. I was not disappointed at all. The spider guard is extremely difficult to pass against a high-level spider guard player. That holds true for everyone. Now imagine that every training partner is larger and stronger than you and it becomes nearly impossible. Well, Bruno doesn’t think so.

Frazatto ahs four different ways of rendering the spider guard useless and passing the legs. The first example is by using a leg drag to achieve a throw-by pass. There’s also a step over method in there, based on the top-spin, as well as a collar sleeve leg drag. However, the most impressive portion in this Bruno Frazatto DVD has to be The forced inversion spider guard passing system. Here, Bruno forces the opponent to invert, however, ina manner that doesn’t allow them to establish an inverted guard. Rather, it opens up leg drags and leg traps that get you past the guard with ease. Finally, a lasso hook long step pass covers the last aspect of spider guard passing.

The final portion of the Complete Guard Passing Encyclopedia Bruno Frazatto DVD is the portion on De lA Riva guards. Between the regular and Reverse De La Riva there are 20 chapters covering different ways to pass.

Half fo those chapters are all about the De La Riva Guard. Passing goes in three different directions: Long step, leg weave and pants grips. In the long step portion, the leg drag and long sep are all that you need to completely shut down the DLR. The leg weave option is my personal favorite offering some amazing control while you effortlessly long step or leg drag past the legs. Finally, a solid pants grip, Bruno Frazatto style is going to offer you great ways of preventing Berimbolos, while passing at will via a Torreando or knee slide.

IN the Reverse De La Riva portion, Bruno actually offers 8 different ways of passing, some of which are brand new. One example is the crazy dog system as well as the leg circle sequence. The leg shelf pass is out of this world and the crazy dog makes yet another appearance, this time against the knee shield. Capping it all off are a couple of awesome drills to keep your technique crisp and your movements flowing.

There’s no doubt that Bruno Frazatto is one of the top featherweight competitors out there. Accordingly, the Complete Guard Passing Encyclopedia Bruno Frazatto DVD is one of the best instructionals on the subject out there. It has so much information inside that you’d be hard-pressed to find a guard you can’t pass after getting through it all.