Getting injured in Brazilian Jiu-Jitsu can vary from stubbing a toe to a fully blown out knee. There’s no need to hide and downplay the fact that injuries are a part of Jiu-Jitsu. They are a part of any port, and trying to say they don’t happen in grappling only makes them seem worse when they inevitably do. That said like in any sport, some injuries are more prevalent in Jiu-Jitsu compared to others. BJJ knee injuries rank very high among those that you can expect to experience at least once.

If you’ve never had to deal with a BJJ knee injury, you’re either not serious about Jiu-Jitsu, or you’re just about to get one. They just happen, especially in academies that don’t shy away from training takedowns on a regular basis. The knees are sensitive joints under the best of circumstances, and getting one of the nastier injuries on a knee will keep you sidelined for months or might even force you to quit. So, while not getting one would be ideal, how you come back from an injury is extremely important.

Know The Extent Of Your Injury

The knee joint is a complicated joint, with a key role in our everyday lives and in grappling. The bones that this joint connects are huge ones, and all the muscles on top and below the joint are also massive. After all, the legs are the strongest part of our bodies. However, the joint itself is extremely vulnerable, much of which is due to the fact that its most sensitive structures are really exposed. 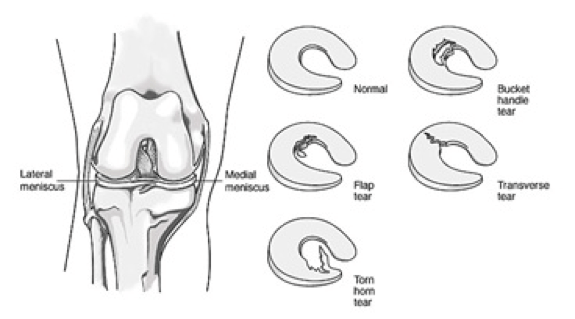 Just take a look at a leg, even a powerlifter’s or a sprinter’s leg and you’ll see that no matter how bad the thigh and calf muscles are, the knees are always the same size. And the knee joint doesn’t just work when we train, but round the clock. That means our knees really do get a beating on a daily basis, even without Jiu-Jitsu. If you work standing, and/or have a few pounds more than you should, this just exacerbates the p[pressure your knees have to withstand every day.

Any BJJ knee injury is based around two major sensitive structures of the knee – ligaments or menisci. The former are the elastic strings that help keep the knee joint together, while the menisci are the cartilage pillows that prevent the thigh and shin bone from touching each other inside the joint. Tears to any of these structures require surgery and a rehab process that you just can’t skip. However, full tears are not as common as you might think, and oftentimes you can get back on the mats quite quickly after a partial tear if you follow a solid protocol

Use This Protocol To Recover Fast From A BJJ Knee Injury

When you get a BJJ knee injury, there’s a simple auditory cue that will usually let you know whether or not it is severe even before the onset of pain. If you hear the dreaded sound of a cloth being torn, or a loud pop, you can rest assured that you’ve messed up your knee, possibly big time. Of course, I’m saying this in the context of a knee injury, as those sounds apply to any joint on our bodies as well. 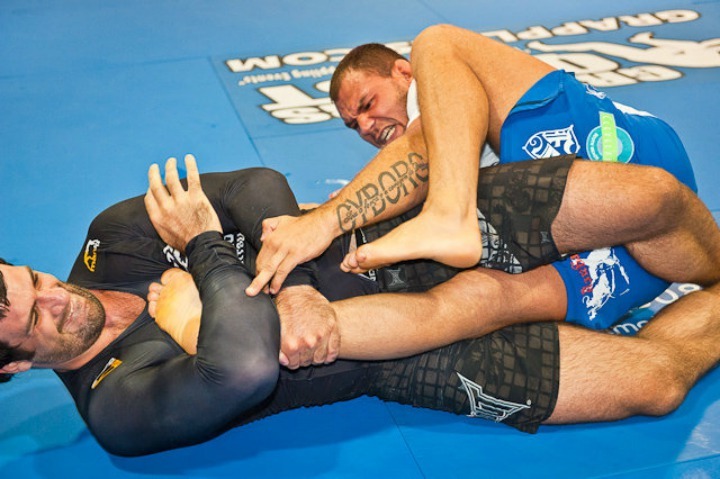 A second marker that should really have you take your BJJ knee injury seriously is swelling,. the knee won’t swell up unless it is something really big, which full ligament or meniscus tears usually are. So if it swells up, especially the morning after, and it locks up, you shouldn’t take the “it’ll pass on its own” route of thinking but go to a doctor immediately.

In fact, if you have any type of BJJ knee injury following the checklist below is going to really shorten the time you spend off the mats, regardless of how serious the injury is. I speak from experience.

Go To A Specialist

The first thing to do is get some professional help and more importantly, a diagnosis. There are two menisci, two key tendons, and 6 ligaments that might be the reason for a BJJ knee injury. And that is when things have gone smoothly. In many cases of devastating injuries, more than one of these structures suffer damage.

When I’m saying go see a doctor, I don’t just mean any doctor. Go see a specialist. GO directly to someone who not just specializes in orthopedics, but really knows knee injuries. It would be ideal if they’ve grappled as well, but that is not a realistic expectation. Go to a specialist, get the diagnosis, and hear what they have to say. Following their advice in the early days of your injury is the smartest thing you can do, even if it is a small one.

The next point in our checklist is the hardest one for any athlete, and especially for BJJ athletes – rest. The fact that you can’t do anything athletic is scary, even when I think about it now, with all my limbs working just enough for me to train later today. When you’re nursing a BJJ knee injury you’ll need to rest, leg up in the air.

And you will have to listen to the recommendations for how long that rest should last. Doctors usually prescribe more than you need, but you’ll need to heed the advice for at least two-thirds of the recommended time on the sidelines. And this part is crucial!

If you get back on the mats too soon, you’ll be looking after your BJJ knee injury and you’ll have your other knee and other joints overcompensate, meaning you’ll likely get an injury on them as well. So, stay at home! 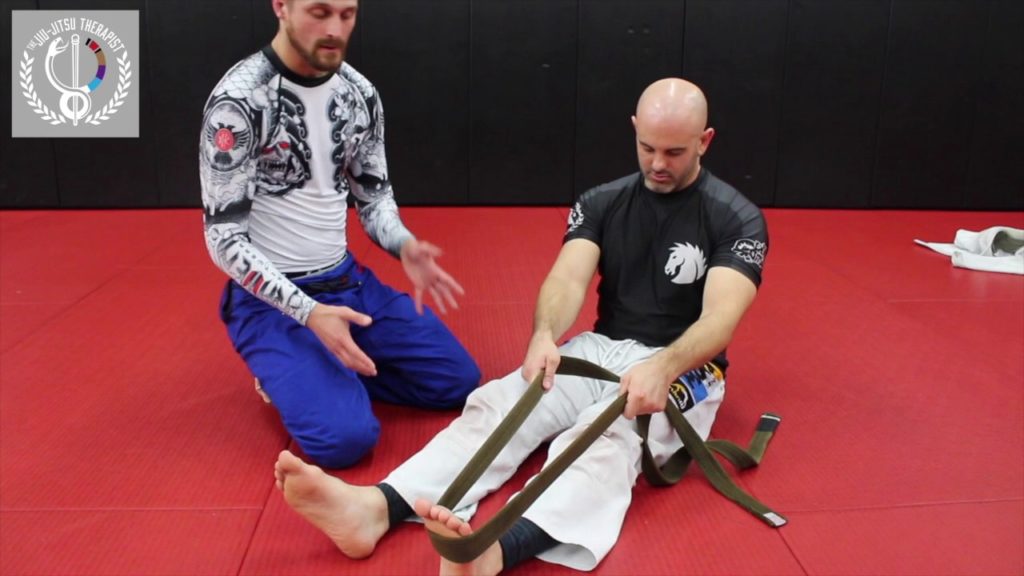 Doing the time might feel like a prison sentence when it comes to training Jiu-Jitsu, but it does not mean that you can’t do anything. On the contrary, you should e looking into rehab protocols and especially rehab exercises.

One thing to remember is to skip the urge of doing the first YouTube clips that seem like it will help. First of all, do your physical therapy bid, as you should according to the type of injury you have. Next, figure out a rehab training protocol with the help of your physical therapist and specialist that will actually help you strengthen the knee.

Speaking of strengthening your knee after a BJJ knee injury, you will need to think not just about the knee, but the entire leg. Even during your time off the mats, your other leg did a lot of the work while you were recuperating. So, you’ll need to bring the injured leg up to par, and then some, if you’re to go back to the mats. If you had surgery done on the knee, this is even more important.

Single leg exercises are the way to go here. First, you should aim to get back range of motion, carefully, while supporting your weight. You can then move on to bodyweight exercises, and isometric exercises that will help you build tendons of steel. Then you will “graduate” to using resistance bands, before finally going on to machines or free weights. At that point, it is time to contemplate a return to that mats after watching all those BJJ DVDs during your time off them.

Your “Back To The Mats” Schedule

This is probably the most important thing you can do to ensure your BJJ knee injury doesn’t re-activate, or you don’t get a new one. As you come back on the mats, you should know one thing – no rolling for at least two weeks, regardless of how ready you feel. In my academy, this is the norm for any injury.

Your return on the mats is going to be purely technical for at least one week. After that time, if you and your instructor feel like you’re okay, you could do some light drills, to see how your knee reacts to a faster pace. Flow rolling, with the instructor only, will follow.

After at least two weeks you can think about position sparring if there was no discomfort during the previous phases of your reintroduction. One or two weeks of position sparring with no issues will mean a complete return to rolling, although I’d refrain from takedowns for the time being if I were you. 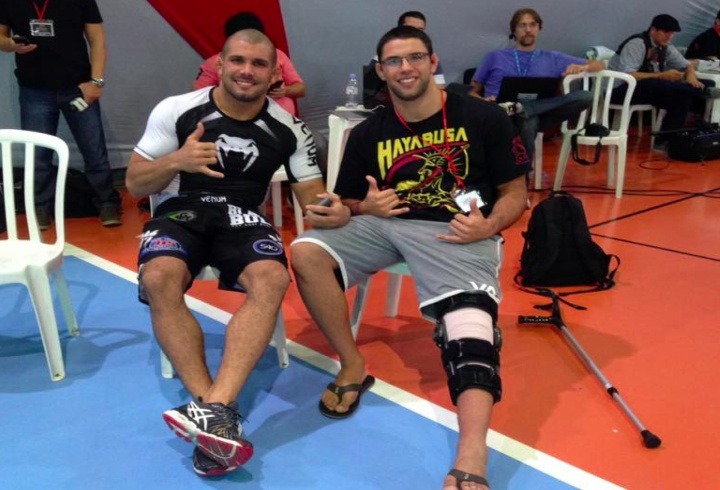 Finally, let’s be realistic. If you had a medium to really serious BJJ knee injury, you’ll need support if you want to train hassle-free, both physically and psychologically. Picking up a knee brace that fits your injury is simply a must and not just any old knee wrap is going to do the trick. Check out the best BJJ knee brace options you have to train pain-free!

A BJJ knee injury can be something that keeps you home for a week or something that might threaten your entire Jiu-Jitsu career. Being smart about it is the right approach, and following the above protocol will make sure that you get back on the mats quickly and without endangering the injured joint, or any other body part.