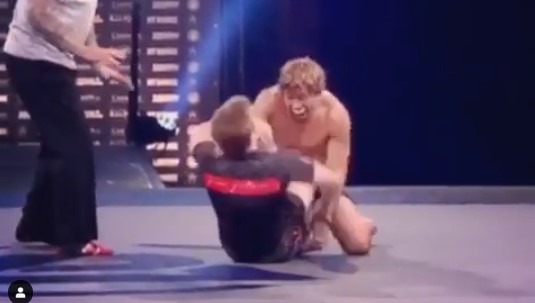 This was a pretty interesting match between Jiu-Jitsu standout Nicky Ryan versus UFC Hall of Famer Urijah Faber.

Faber was very aggressive but he wasn’t able to intimidate young Nicky at all! Nicky Ryan’s persistence paid off against him.

Check the video of Urijah’s aggressiveness in the video below and you can watch the full fight on UFC Fight Pass.

“It’s definitely tough to try and go after someone and repeatedly get palmed in the face,” he said. “It’s also hard to make grips because he’s shirtless, so my grips were just sliding off. Overall, very disappointed with my performance. I would have much rather have been able to submit him.”

“Nicky and I got a chance to roll a couple of months back, and I was aware of his back-takes and he was aware of my chokes,” he said. “I told Nicky after the match, from a fighting standpoint, you box a fighter, and you fight a boxer, and he’s a technician. I think the difference there with one of the best grapplers in the world, he had a specific game plan, I had a specific game plan, and his butt-scooting was first.”

“I’m thinking about fighting here in a couple of months, and this was a little tune-up to get my weight down and get prepared for battle,” he said.