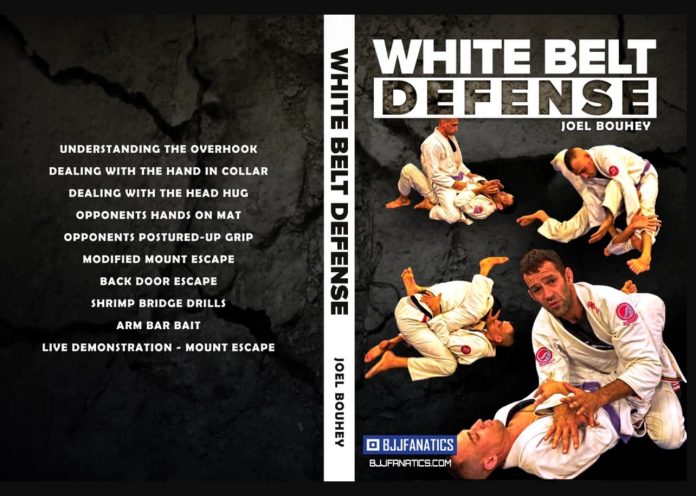 Ah, those white belt days. The moment you become a blue belt, you start talking about those days as if they were fond memories. Well, you can stop, we all know you’re lying. We’ve all been there. It is a hard, punishing and demoralizing job to be a BJJ white belt. However, the harder it is, the better the reward will be when you emerge on the opposite end. Still, nowadays, it seems that even a white belt’s experiences are not that hard. When I was a white belt there was not an instructional around, el talon one aimed at helping white belt get through their toughest days. Joel Bouhey has decided that white belts also deserve some dedicated help, though. So, he put together an instructional by the title of ”White Belt Defense”. And it is a great one!

I would’ve probably given up a limb if someone gave me a blueprint to defending when I was a white belt. Actually, I almost gave up a few of them anyway. However, jokes aside, having a map to guide you through those crazy times is more than welcome and certainly very helpful. Okay, the first few months are still going to suck, but you have to learn what grappling is all about. However, the subsequent year and a half or so don’t’ have to be as hard as it was for previous generations. “White Belt Defense” is a BJJ DVD aimed to help beginners cope with everyone else in the gym. And Joel Bouhey did a fantastic job with it. It is short, sweet to the point and contains just the right amount of information!

When you think about Hawaii and Brazilian Jiu-Jitsu, one name pops up to everyone’s mind – BJ Penn. Yeah, he is a crazy talented grappler who got his black belt in like three years or something, However, he is far from the only high-level Jiu-JItsu black belt on the island. In fact, Maui’s own Joel Bouhey might have something to say about it. The Luis Heredia black belt is not only high level but also has a unique and very effective style. His “White belt Defense” instructional is a great way of sharing some of it with us all in the grappling community.

In fact, if there’s one thing that people can associate with Joel it is the Falcon guard. Yeah, Joel is the man behind it, a variation that’s just as crazy effective as it sounds. However, it is not the focus here today. Joel is just as innovative all across the board as he is off his back. The Hawaiian’s latest effort is one that white belts across the globe will be extremely grateful for. Talk about winning a large audience at once!

The Importance Of Defense Early On 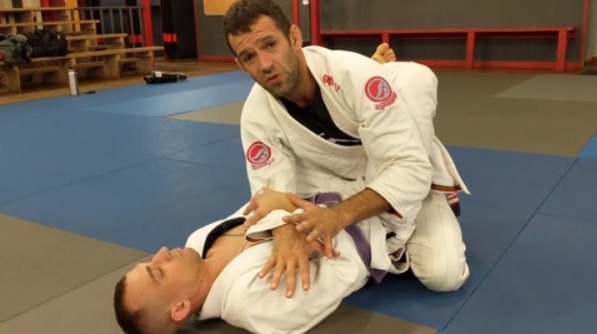 When you’re a white belt in Brazilian Jiu-Jitsu, just getting to the gym to train is a really difficult decision. Going back to a spot where people smash you and tear you apart while you have no idea what’s happening requires character. Still, those that battle on, get to enjoy grappling for life. However, if there’s one thing that a white belt can do to actually have a better time as a beginner is to discover defense. And that doesn’t just mean in training. Apart from the odd white and blue belt, everyone else sis till going to tap you and manhandle you for most of the time. However, when it comes to fellow white belts, and blue belts you’ll become a very difficult riddle to solve.

One great aspect of focusing so much on White Belt Defense is not just to help you through training. If you have any intentions of competing as a white belt, having a defensive game is going to be a much better way to become accustomed to the stress of grappling tournaments. In fact, it is one great way of making sure you do not do stupid mistakes and give your self every chance to win. And Joel Bouhey has the tool to help you.

The “White Belt defense” Joel Bouhey DVD is not like any other instructional out there. For once, it is not split into many parts that go deep into the philosophy of Jiu-JItsu. It is also not one of these instructionals that break the positioning of every finger step by step. Instead, it is a short DVD, with the sole focus of helping you survive with the least amount of information possible. After all, as a white belt, you still have a lot of BJJ learning ahead of you.

The DVD opens up with one section that fans of the Falcon guard will recognize immediately – the overhook. Once you’re on your back and in closed guard, Joel’s go-to spot is securing an overhook. Unsurprisingly, this is actually a concept many higher belts might want to revisit as well. That said, Joel doesn’t spend too much time in any position in order to avoid confusion. Rather, he switches to passing the closed guard immediately, offering key ways of surviving. Among them, you’ll find ways of dealing with the head hug, the collar grip as well as what to do when the opponent’s hands are on the mat. 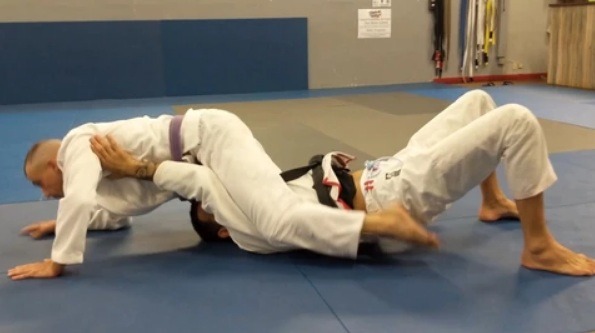 In the second half of the “White Belt Defense” DVD, Joel covers yet another key aspect for beginners – dealing with mount. Innovative as he is, he does a modified mount escape first. Next, he offers another way out through the back door mount escape. Before he wraps up with an awesome armbar bait, (great for any belt) he also covers some basic drills in the form of shrimping and bridging.

The final chapter of the instructional is actually a live demonstration of how mount escapes work. As a white belt, this is something I could’ve only dreamed about.

All in all, it is great f=of Joel Bouhey to make a DVD that’s focused on helping white belts. Moreover, one that’s there to help them understand “White Belt Defense”. The guard and mount are tow of the spots most white belts will find themselves in constantly, Moreover, they’re not that hard to deal with, particularly with fellow beginners. So, this is instructional to give you an edge over your peers. Who knows, it may even frustrate so some of the purple/brown/black belts in the gym!