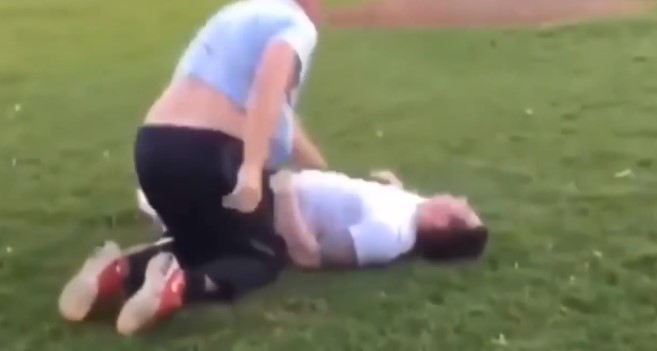 The Von Flue choke may be very powerful but tricky submission. The thing is if you don’t let go of guillotine choke that you’re actually trying to apply chances are close to 100% that you’re going to sleep just like the guy on the bottom did.

While it’s easy to escape von flue choke some people still fall into it due to lack of Jiu-Jitsu knowledge in the first place. In the second place, people just don’t want to let go of “submission” they think they have. And in the situation like this when the guy on top has his body on the other side of the guillotine choke Von Flue is inevitable.

If you want to learn everything about Von Flue Choke make you follow THIS LINK. You’ll be able to learn how to apply and also watch some videos of Von Flue Choke being applied in MMA.

You think this guy has James Clingerman’s DVD? We don’t condone street fights, but the man showed good restraint after his opponent was unconscious.